“Life can only be understood backwards; but it must be lived forwards.”—Soren Kierkegaard

SAN FRANCISCO California—(Weekly Hubris)—12/19/11—In dealing with the care of a mother who is approaching the last stage of her life, I’ve been sifting through heaps of things at her house: some useless; others, evidence of lives once lived, lives once left behind.

I clear away objects rendered useless by time, and am touched by the fear that drove my parents to save everything from canned and jarred foods to bits of wire that just might some day be useful. At first, the rusted cans, the lime-scaled jar lids, the boxes of tangled wires appall me, but soon I learn to see them as testament to their search for security, a hedge against the onslaught of history’s worst debacles.

For, in spite of their comment that now we’d come to America everything would be all right; in spite of their assurances that we were finally safe from slaughter and mayhem, the certainty that such horrors can happen anywhere remained with them and fueled this need to hoard.

Truth be told, I too inherited their fear but perversely, I don’t hoard, don’t collect. Perhaps because I saw and understood at a very early age that such stockpiles are useless.

As I fill rubbish bins with my parents’ ineffectual defenses, I recall the moment that I realized that no one could protect me from the killers of this world. We were in Shanghai. I was three. My mother, afraid to leave me at home with the Amma in a time of turmoil, brought me with her to the prison in which Mao’s goons held my father on trumped-up charges. I saw him in leg irons, barely able to eat the food my mother brought. But, worst of all, I saw the look in his eyes.

That look stayed with me all my life. It’s the expression of people who have lived through the terrors of iron-fisted occupations, a look beyond fear, beyond rage—it’s the look of absolute sorrow.

I tell myself, as I clear out the dust-packed, crumbling remnants of my parents’ just-in-case collections, that I’m doing this to clear away the irritants that induce my mother’s asthma attacks. I tell myself that I’m clearing away the debris of fear. I tell myself so many things, until, finding a box full of my report cards, I’m forced to sit and stare at this, my mother’s effort to preserve a personal history that was denied her.

All that “telling myself” is silenced by the single act of hope that there would be a future for me, a future in which I would look back to a time when Madame St. Carmel wrote in her perfect calligraphic script: Deportment: Excellent.

That nun, in that long-ago first-grade year of my life, clearly appreciated my silence.

Deportment: Excellent, brought back the confusion, the discomfort of that first school year, when I was perplexed by the loud exuberance of my classmates at recess; when I wondered at their swaggering boasts of toys and things that they demanded and received. It took time for me to learn to run with them, to chant about “the lady with the alligator purse” as I skipped rope.

A box full of report cards triggers a world of kaleidoscopic memory revolving in fragments of images, voices, words I’d long forgotten. Some memories painfully recall the consequences of C’s, but I resolved to put those into the rubbish bin—the memories, not the report cards. The latter I keep. There are stories to be mined there.

I think back on the trajectory of my parents’ lives, always controlled by the spectral memory of Genocide, revolutions, and political upheavals of all sorts, and I begin to understand, to realize that I, too, have lived under the pall of their incessant stories, their urging that I never forget.

It’s the mantra of all survivors: “Never forget!”

The image of my father’s eyes on that cold afternoon, in the filthy, dim dungeon of Mao’s hell, won’t leave me. I won’t allow it to leave me. It drives one of the non-trivial pursuits of my life, to remind others that this hell can happen anywhere, if we’re not mindful, if we don’t stop intolerance before it infects us all.

It occurs to me that we, too, in our stories, were intolerant. The whole useless cycle of history’s aberrations seems sadly repetitive.

When, I wonder, does it end?

I know when my own family’s story will end. It will end with me. There are only two of us now, on this side of the divide.

Soon there will be only one. 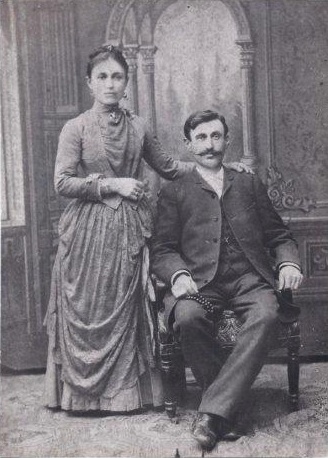 Tossing out old Safeway ads and TV Guides of another decade, I find a blank brown paper envelope. In it is a sepia photograph of my maternal great-grandparents posing in Victorian splendor: a treasure in the midst of trash.

I resolve to be careful, to examine everything before deciding its fate. There may be other treasures from the past to be discovered. Opening a drawer, I come across a fine Japanese box. It’s small, a little battered, but the artisans’ image of a gibbous moon hanging heavily over budding pomegranate blossoms still enchants.

It strikes me that this was my aunt’s aesthetic. For all her surface efforts at movie star glamour, she had a delicate sense of beauty, a sophisticated taste for things elegant and spare. The black box, made precious by the mysteriously hazy image, somehow evokes sadness. This woman, my aunt, the “princess” of the family, never succeeded in her lifelong search for real love, never found the prince of her romantic dreams. Hers was a life of loss indeed: two husbands who betrayed her and, in the end, a mind that betrayed her, too.

There was a lucid moment before her accelerated descent into Alzheimer’s when, with tears in her eyes, she asked me, “Am I losing my mind?” I don’t recall what I said. I know that I turned away from her to hide my own tears; then, hugged her, but only for a moment. Was I reluctant to add to her distress with my own? Or did she stir up fears I did not want to face? For we shared that fear, my aunt and I: the loss of mind is more terrible to me than almost anything else.

Gently, I put the box aside. I’ll take it home, clean it up, place it where I can see it every day, and touch it on occasion—contact with that sad and dream-prone woman who loved me, hated me at times, and sought me out to give her solace in the end. Aspects of her are in me, and I often remember her story as a cautionary tale.

Throwing out bits of broken flower pots, I find, tucked under a dish, a flat rock the size of my two palms joined. Turning it over I see that it’s a piece of obsidian. Embedded in its lower half is a speck of turquoise. The gleaming black stone evokes a flood of memories: tiny islands of obsidian encountered in the Mediterranean, the obsidian found on Thera, that magical site on Santorini that I so love, archaeological digs in Italy and Greece where I unearthed obsidian tools traded by our Neolithic ancestors with tribes from as far north as the Steppes.

It seems fitting that, in this process of sorting out, I’m prompted to remember my ancient ancestors. And then, of course, the Wise Men and Wise Women of the past considered obsidian one of the healing stones. They attributed great powers to it: a stone for grounding; for clearing toxins from the liver and spleen, where anger and grief are stored; a stone for purging old deleterious emotions.

What a perfect find for this passage in our lives, my mother’s and mine.

What is being purged in this great clearing out of the detritus of my parents’ past? I’ve noticed a softening to the hard efficient edges of my tolerance towards my mother’s incessant demands. My memories of her rages, while never fully expelled, have been put away, filed as “of the distant past.” I turn to the immediate present, my life’s baggage much lighter.

Strange how things come together.

8 Responses to Pentimenti: Of Clearing & Discoveries