“Joy-of-the-People (literal transliteration of my Greek husband’s name, Harilaos) and I discovered the little island by accident back in 1975. Horrified by the rats slinking around taverna tables in the port of Kalymnos, maddened by the motorbikes roaring round and round the main square, we shouldered our rucksacks and escaped the holiday from hell. A cargo caïque bound for Pserimos offered salvation. We’d never heard of the place but, soon enough, we’d never forget it.”—Diana Farr Louis

“Joy-of-the-People” (literal transliteration of my Greek husband’s name, Harilaos) and I discovered it by accident back in 1975. Horrified by the rats slinking around taverna tables in the port of Kalymnos, maddened by the motorbikes roaring round and round the main square, we shouldered our rucksacks and escaped the holiday from hell. A cargo caïque bound for Pserimos offered salvation. We’d never heard of the place but, soon enough, we’d never forget it.

Clearly the only non-locals, we clambered over a jumble of people, crates, sacks and demijohns and elbowed a space for ourselves on the crowded boat. We had no idea what to expect at the other end, but the captain was reassuring. “Of course, you’ll find a bed,” he said. “Not to worry. Kyria Maria has rooms.”

The trip can’t have taken much more than an hour and, as we approached Pserimos, we saw a broad sandy beach surrounded by stony, treeless hills. An uneven row of single-story, white-washed cubes filled the gap between sand and rock, shaded by a few tamarisks and reed mats stretched over a few poles by their front doors. It all could not have been more different from where we had just come. There were no roads, no noisy engines, no electricity . . . and no men. Or, at least, not very many because, like Kalymnos, this too was a sponge-fishing island and every male of a certain age was away with the fleet. In time, we got to know them all—the priest, the postman, and the storyteller.

But first we had to arrange our accommodation. Maria looked us up and down, and showed us a room furnished with two chairs and a blanket hanging down the middle of it. “I don’t have a bed for you; we sleep on blankets here, and those we have plenty of. I’ll just give you several to make up a mattress.”  And the curtain? “Oh, the other half of the room belongs to an Englishman. He won’t be any trouble; he’s out all day.” But what about the nights? The situation was considerably less than ideal, but we were stuck.

We later discovered our mysterious roommate was doing research on sponge fishing . . . without speaking a word of Greek. But he rarely uttered a word, even in his native tongue, and didn’t snore; there was an acceptable if rudimentary loo and shower; and, piled with blankets, the floor turned out to be quite comfortable.

It didn’t take long to find our way around the island’s 20 or so houses. And we were made to feel part of the community even more quickly. No sooner had we stepped out the door than a woman ran by, knife in one hand, flapping chicken in the other. “Ela, Kalé,” she said to “Joy,” “do me a favor and slit this hen’s throat. It’s a man’s job, but there’s no one here to help.”

“Joy” begged off, appalled. “Sorry, I’m a surgeon. I only cut up live humans—under anesthetic.”

Off the beach, another caïque had anchored, weighted to the gunnels with bales of hay. We stared, eyes popping, as several women waded, fully dressed, white headscarves firmly tied, into the sea towards the boat. Their skirts billowing as the water filled them, they looked like the sea-monsters engraved on medieval maps. Strong as any men, they heaved the meter-long hay bales onto their shoulders, balanced them on their heads, and splashed back to the sand.

That evening, half the island gathered in Pserimos’s one shop—a general-store-post office-telephone booth-café. The owner seemed reluctant to cook so, starving by now, I offered to do it myself and somehow ended up making omelets, fried potatoes, and tomato salad for all the clientele. He had no hesitation about pouring wine, though. Surprisingly good, it loosened tongues, and soon stories were spinning as they always did in Greece before television stole people’s wits.

One scrawny old man held us spellbound with one tall tale after another. I only remember a fragment of what I heard, a description of a former wife: “She was sooooo rich, she could hardly lift her arms for the bracelets, which coiled up to her elbows. And her earrings were so heavy, her earlobes hung all the way down to her shoulders . . . .”  We went back to our blanket-bed in a haze of well-being and camaraderie. 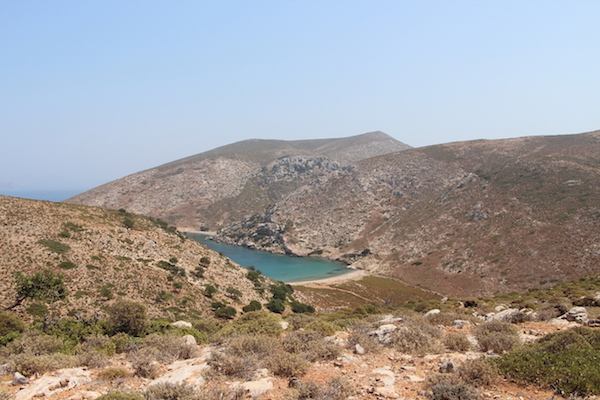 The next day we decided to walk across the island—not a terribly ambitious project considering its small size—it must have taken under an hour. We were snorkeling naked in an Aegean equivalent of the Blue Lagoon, just a few miles from the Turkish coast, when we heard a fishing caïque chug in. We struggled into our bathing suits and were soon discussing everything from our background to their politics. They built a fire on the beach and invited us to share their two-course feast—kakavia (fish soup), boiled with sea water and served in plastic cups, followed by grilled parrot fish, which we ate with our fingers. Scrumptious.

Back in the village, we joined a cluster of people inspecting a newly arrived load of sponges, but I wandered off to watch some women washing their hand-made blankets on the rocks. Simple but elegant, they were woven in bands of brown, beige, black, and white natural wool. I yearned for one.

Too soon, it was time to leave. We paid Maria for the room, a sum quite out of proportion to its eccentricities, and I asked her if I could buy a blanket. She made up an elaborate excuse, explaining that it was so difficult to make them—from shearing, carding, spinning the wool, to weaving the bands and sewing them together—that they kept them in the family and for guest beds. It would not be possible. She said she was sorry but did not look in the least apologetic.

There was no regularly scheduled boat, so we had to hire one to take us to Kos. To our surprise, practically the whole island, including Maria, boarded with us, chatting excitedly at the prospect of a free trip. We were sitting sheepishly in their midst, feeling both isolated and exploited, when suddenly an old crone blurted out at Joy: “Kalé, se kséro! I know you! Aren’t you a doctor at the such and such hospital?” “Joy” had to admit that he was and, the minute he did so, the whole boatload looked at us with new eyes, such is the respect accorded to surgeons in rural Greece. Medical questions filled the air and, when we arrived in Kos, Maria gave us both the warmest of handshakes and said, “You shall have your blanket. I will make one especially for you.”

Some months later, when we had completely forgotten her promise, a package arrived from Pserimos.

Maria had sent her blanket—a present, with no bill attached—and we kept it on our bed for years. And, every Easter, we received a card from her, though she never turned up at the hospital.

I like to think this story could happen in Greece today. But the four lines in the current Lonely Planet guide end with the troubling observation: “[Pserimos] occasionally becomes overrun with day-trippers from its larger neighbours.” 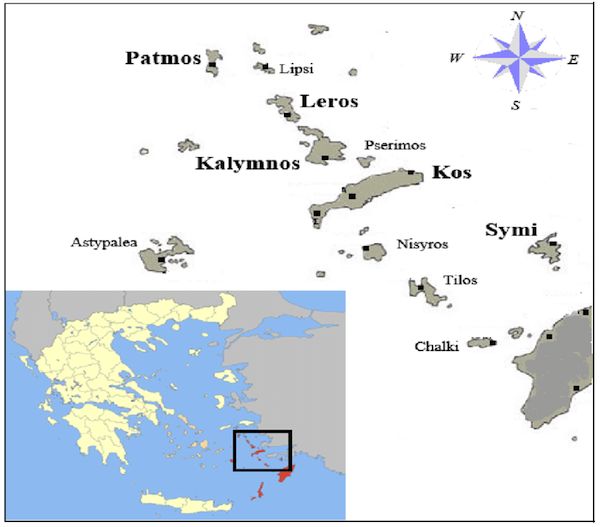 Pserimos, among the other Dodecanese.

Diana Farr Louis was born in the Big Apple but has lived in the Big Olive (Athens, Greece) far longer than she ever lived in the US. She was a member of the first Radcliffe class to receive a degree (in English) from Harvard . . . and went to Greece right after graduation, where she lost her heart to the people and the landscape. She spent the next year in Paris, where she learned to eat and cook at Cordon Bleu and earned her first $15. for writing—a travel piece for The International Herald Tribune. Ever since, travel and food have been among her favorite occupations and preoccupations. She moved to Greece in 1972, found just the right man, and has since contributed to almost every English-language publication in Athens, particularly The Athens News. That ten-year collaboration resulted in two books, Athens and Beyond, 30 Day Trips and Weekends, and Travels in Northern Greece. Wearing her food hat, by no means a toque, she has written for Greek Gourmet Traveler, The Art of Eating, Sabor, Kathimerini’s Greece Is, and such websites as Elizabeth Boleman-Herring’s www.greecetraveler.com. A regular contributor to www.culinarybackstreets.com, she is the author of two cookbooks, Prospero’s Kitchen, Mediterranean Cooking of the Ionian Islands from Corfu to Kythera (with June Marinos), and Feasting and Fasting in Crete. Most recently she co-edited A Taste of Greece, a collection of recipes, memories, and photographs from well-known personalities united by their love of Greece, in aid of the anti-food waste charity, Boroume. Her latest book, co-authored with Alexia Amvrazi and Diane Shugart, is 111 Places in Athens that you shouldn’t miss. (See Louis' amazon.com Author Page for links to her her titles.) (Author Photos: Petros Ladas.)
View all posts by Diana Farr Louis →
This entry was posted in Uncategorized. Bookmark the permalink. Follow any comments here with the RSS feed for this post. Both comments and trackbacks are currently closed.