May Day, or Pouvez-vous m’aider?

“May Days were a new concept to me. As an American, I always thought of Labor Day as an end-of-summer holiday, not a rite of spring. In Paris, it meant little old ladies selling bunches of muguets (lilies of the valley) on the curb. In Greece, as I was to discover, it was a time for making wreaths of wild flowers to hang on one’s front door. Or one’s car mirror—in the same way that Athenians of those bygone days used to sculpt mini snowmen on the hoods of their cars as proof that they’d gone up to the mountains after a snowstorm; or dangle braces of game-birds to demonstrate their prowess with a shotgun.”—Diana Farr Louis 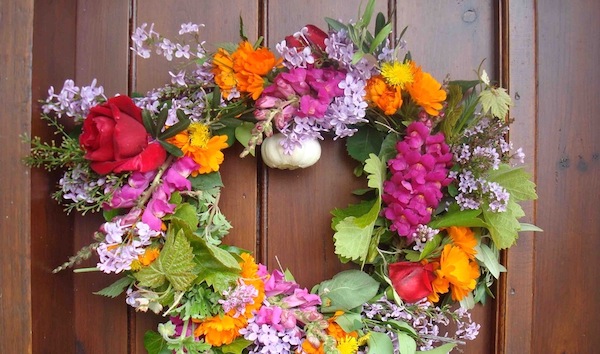 ATHENS Greece—(Weekly Hubris)—(First Publshed on May 7, 2012)—In early April, my favorite word blog, Anu Garg’s Wordsmith (www.wordsmith.org), gave subscribers the origins of the universal cry for help. Of course, most of us know it comes from the French, short for pouvez-vous m’aider but, as European Labor Day approached, the shout kept echoing in my mind.

For here we were in Athens, unable to celebrate the charms of spring because of having overindulged on Andros at Easter. No, we were not doped in an alcoholic haze, or even suffering from pollen allergies. Instead, we were trapped in our apartment by a mysterious malady. Poor “Joy-of- the-People”—my spouse, Harilaos—in his drive to rid our plot of thistles, and cut corridors through the weeds (which are dwarfs compared to last year’s but still annoying), overdid it and, after a couple of days in the city, had excruciating pain in his right hand that reduced him to a very unhappy couch potato.

We were to find out that it was gout! Brought on by a surfeit of roast lamb and asparagus. (Not red wine, nor a steady diet of grouse and venison.) Who knew it could attack the hand?

By May 1st, Europe’s Labor Day, he was fit enough to be bored after sitting inside for too long. So, at half past noon, we hit the road with the intent of driving over Mt. Pendeli to the sea near Marathon for a taverna meal.

How could we have been so naïve. The turn-off for the mountain was so clogged, we couldn’t even round the corner. Then, we decided to try for Rafina, a little port, instead. But never got there. Almost two hours later, we were inching in neutral on the same road where the Marathon is run, still miles from our destination: locked into position along with half the population of Athens, consuming precious gas going nowhere. 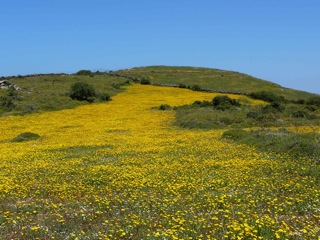 Daisies: what we’d be missing on the island of Andros.

This is when the May Day signal howled loudest in my mind. We’d been stuck in the flat; now, we were stuck in traffic, with no rescue possible until we reached the access link to the Attiki Odos, the highway built for the Olympics. That would get us back home in 15 minutes, max, but it was still an age away.

So instead of following Eckhard Tolle’s advice and living in and for the moment, we found ourselves traveling back in time to other May Days. It was not a longing for the past; we were simply reminiscing, reliving sweetness and fun. After all, are not our memories part of us, too?

Maroussi. The name to you might mean a colossus, a teller of incredible stories to an illustrious audience. But to me, it’s where I lived for almost 20 years. A faded pink stucco house with delphinium-blue shutters, set in a garden of fruit trees and rosemary bushes, hedged on two sides by lilacs and yellow winter jasmine. An arcade covered with Virginia creeper and bordered by heavy-scented angelica. An orange trumpet vine scaled the walls in front, white jasmine fluttered outside the kitchen, which formed a courtyard with a tiny guest house, a majestic olive tree and the least favorite of our four fig trees.

This was where we sat whenever weather permitted, where we had fabulous lunch and dinner parties, or lunch parties that ended well past dinner time. Our wine barrel stood nearby under an alcove, and once I left a pitcher under its spigot and forgot to turn it off until a rivulet of retsina arrived at J-o-t-P’s shoes. My shame was punishment enough.

The house belonged to my first husband’s family, who called it the spitaki, or “little house,” as compared to his grandmother’s mansion across the street or his parents’ home before the Depression, located in the same neighborhood. Although Alexi’s father died soon after and his mother had little money, the place seemed to breed happiness. Older friends told me how they had loved to gather there before the War, though Dodo, Marina, and Alexi could not offer much more than stories and kefi (joie de vivre) with the simplest of mezedes (hors d’oevres) and drinks.

After my son and I settled there in June of ‘72, I do not remember a moment of regret; not even a question as to whether this had been a good move. Until autumn, we lived with practically no furniture, just the beds and cupboards we’d inherited, and a fully equipped kitchen, which I’d bought. But the house embraced us, and everyone who visited.

Was it the old red tiles on the floor, so soft on our bare feet: cool in summer and warm in winter? Or the built-in shelves and cupboards, the thick walls and window seats, the fireplace, and the glorious waste of space and glassed-in porch upstairs? Or even its refusal to keep people out.

Once we came back late for an appointment to find a family friend sitting in the living room. “Not to worry,” said Fani. “I knew the side door would be open and just let myself in. No one ever remembered to lock it, then or now.”

May Days were a new concept to me. As an American, I always thought of Labor Day as an end-of-summer holiday, not a rite of spring. In Paris, it meant little old ladies selling bunches of muguets (lilies of the valley) on the curb. In Greece, as I was to discover, it was a time for making wreaths of wild flowers to hang on one’s front door. Or one’s car mirror—in the same way that Athenians of those bygone days used to sculpt mini snowmen on the hoods of their cars as proof that they’d gone up to the mountains after a snowstorm; or dangle braces of game-birds to demonstrate their prowess with a shotgun.

Ideally, the May wreath should be hung on the door before dawn, so that the first rays of sunlight may strike it and bring luck to the household. Or so Christina told me. She was our housekeeper. She cooked, cleaned, did the laundry, babysat for Duff, who was only six, and looked after almost every aspect of our lives. She did so much for us that her husband accused her of loving us more than him. She might have agreed.

She called herself the Kali Magissa, or the Good Witch. She could have been our fairy godmother. And on May Day, she would fly down on gossamer wings from her own house about a kilometer away to place the wreath on our door in total silence. And be gone, leaving us to find her blessing alone.

On May Day, though, one also had to be vigilant. Any flowers hanging over the wall were considered public property, fair game for marauding wreath-makers, who might even invade the garden to grab my purple irises or red roses. I used to preempt them by cutting all the exposed lilacs and stuffing them into vases for our lunch party. 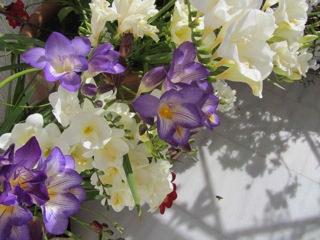 Freesias on the balcony console us: too pretty to pick.

Where are all our guests now? The friends and neighbors who would sit with us for hours, singing, telling stories, plucking their guitars. So few remain. So many now divorced, moved away, passed away . . .

And the Spitaki is gone, too, replaced, fig trees and all, by an apartment building. In fact, nothing remains of the neighborhood. Only one or two of the lovely old houses are still standing. Nobody would ever suspect the grace and elegance it used to possess; the residents who gave it color.

Shouting “May Day, May Day!” won’t bring them back, but it does me good to remember.

This column is dedicated to three beloved friends who were born on May 1st and who left us way too soon: Marina Sulzberger, Gavin Borden, and Bill Cunliffe. 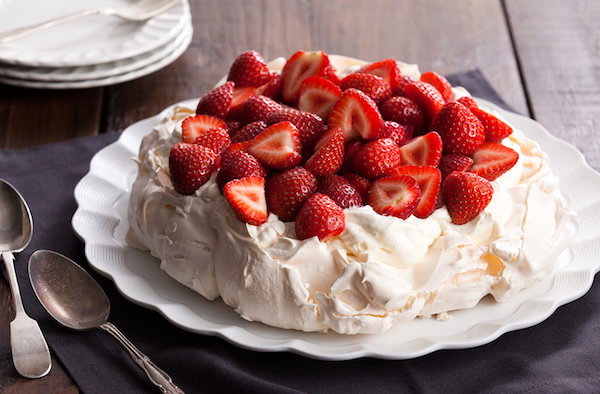 Pavlova, named for the Russian ballerina.

It’s also strawberry season and, who knew: Strawberries are the best antidote for gout. So, in pain or not, we devour them every day. Here’s a recipe for “Pavlova,” New Zealand’s “national dessert,” which my Kiwi friends make this time of year.

Beat the egg whites in a bowl until you have stiff peaks. Add the sugar, a little at a time, beating until the peaks are smooth and glossy. Beat in the cornstarch, then the vinegar and vanilla.

Spread the meringue mixture on the paper, making it higher round the edges than the center. Bake for 1 to 1 ¼ hours until the meringue is firm and ever so slightly beiged. Turn off the oven and let cool overnight. Don’t be dismayed if it cracks. You can repair any damage with whipped cream.

Just before serving, spread the whipped cream over the meringue and top it with the strawberries.