“Seeing may be believing, but there are times when something so remarkable happens that we cannot believe even our own eyes. Years later, after Eli had died, I was living in Wilmington, Delaware, where I hiked on a 2,000-acre wildlife refuge, accompanied by my new Yellow Lab, Simon. One warm September afternoon, as we leisurely wandered along a trail at the foot of a bluff, I noticed something white about halfway up the hill.”—Robin White 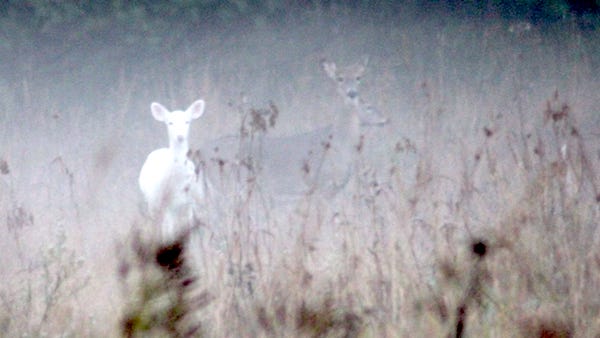 LAKE HARTWELL South Carolina—(Weekly Hubris)—February 2020—Many years ago, very early on in my ministry, my faithful companion Eli (short for Elijah) and I hiked several times a week at Killen’s Pond State Park, just south of our home in Dover, Delaware. Eli, who was a 60-pound Yellow Labrador Retriever, loved swimming in the pond.

One December afternoon, as we hiked the path leading to the edge of the water, Eli trotted on ahead of me. He was always very good about stopping to turn his head back and wait for me to catch up. On this particular day, however, he ran out of sight. Suddenly, I heard a great splash, one so enormously loud that I knew it involved more than just 60 pounds of dog.

I sprinted to the edge of the pond, where I could not believe my eyes. Swimming across the water was a buck, one that my brother, who is a hunter, would call a monster deer, with a ten, maybe 12-point rack. Eli was swimming hard on its tail. The deer let out a horrible bleating hullabaloo, and swung his rack around at Eli, who was, by this time, literally riding the buck piggyback.

In a panic, I called and whistled, but Eli was having far too much fun for obedience. The two of them, deer and dog, paddled across the pond as I stood helpless on shore. Finally, Eli grew tired of the adventure and came back grinning and panting, as if to say, “Did you see me swimming? Did you see me riding on the back of that deer!?”

Seeing may be believing, but there are times when something so remarkable happens that we cannot believe even our own eyes.

Years later, after Eli had died, I was living in Wilmington, Delaware, where I hiked on a 2,000-acre wildlife refuge, accompanied by my new Yellow Lab, Simon. One warm September afternoon, as we leisurely wandered along a trail at the foot of a bluff, I noticed something white about halfway up the hill.

At first, I thought it was a big white plastic trash bag blowing in the breeze. As I looked back a second time, however, I could see that whatever was up there was alive, with four legs carrying it through the low-lying brush. I called Simon back to my side, held him by his collar and stood watching it, adjusting my vision.

It was too big to be a dog. My mind raced as I considered what it could be. Perhaps a goat, or a horse, had wandered away from a farm? The animal was pure white, almost translucent against the brown, brush-covered hillside. I had heard of albino deer but could not bring myself to believe that I was actually seeing one. I knew there was such a thing as a genetically mutated, Piebald deer, a deer with patches of white hair. Piebald are extremely rare, and a completely white or albino deer is almost unheard of. As the animal noticed us and turned to bound up and over the bluff, I saw its white flag tail. Simon and I stood in stunned silence. I found it hard to believe what my eyes had seen. The experience felt dreamlike.

When I got back home, I called my father to talk about what I had seen. He told me that he had heard that less than 2 percent of white-tailed deer are piebald and that an albino deer was exceptionally rare. Not only does the white hair makes them highly visible to predators, but they are often born with physical abnormalities as well; curvature of the spine, small jaws, disfigured feet, and short legs. A true albino deer will most likely also have vision problems. With all of these disadvantages, it is atypical for them to reach maturity; and, even more so, old age.

Nevertheless, I spent weeks revisiting that area of the park, hiking and scanning the woods, looking for my white deer, wondering if I had ever really seen it in the first place.

And then, one early December morning, the albino deer reappeared in almost the exact same place as before. As it meandered through the scrub brush, I climbed after it, hoping for a closer look. With Simon on his leash, we climbed up the bluff, scanning the side of the hill as we went. It was like seeing a ghost, or a spirit. The deer stood some 15 yards from me, watching me watch it.

I was close enough to see its pink eyes and nose.

It was a moment of grace; sacramental, as we locked eyes. I suddenly felt intense sadness. It was as though I could share in the loneliness of a being exquisitely different, and terribly isolated, from the rest of her species. Then she turned and bounded off, an ethereal creature: perfect, flawless, pure as the new fallen snow.

I hiked those woods for another year before moving out of the area, and never saw her again.

Sometimes, even now, I find myself scanning the earth-toned forest for a glimpse of the brilliant white doe. And sometimes, I wonder if I ever truly saw her in the first place 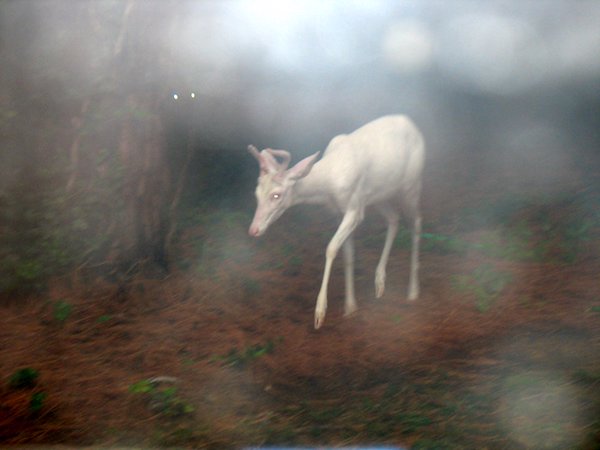 “The White Deer,” by Kay Goldstein.

From what wild ballad of English green
or Persian miniature, from what withdrawn
place of days and nights no longer seen
came the white deer that I dreamed at dawn?

It crossed the lawn, a momentary reflection,
and vanished in the afternoon’s golden tide.
A graceful thing, half made of recollection,
half made of forgetting: a deer with one side.

The gods that rule this strange life, it seems,
have let me dream you, but not make you mine.
But maybe in some future bend of time

I will find you again, white deer of my dreams.
For I too am a dream, and will soon be gone,
like the white and the green of my dream at dawn.

Translated from Spanish by Paul Weinfield, © 2016

Spirit, the rare albino fawn found by a trucker and rehabilitated by Kindred Spirits Fawn Rescue, was released back into the wild with seven other fawns, Monday, October 7, 2019.

2 Responses to Revelation in White