“There is no room in this world for ‘us and them.’ This world demands an attitude of ‘us,’ all of us within one human race. It demands our ending the demonization of ‘the other,’ by erasing the concept of ‘the other.’”—Helen Noakes 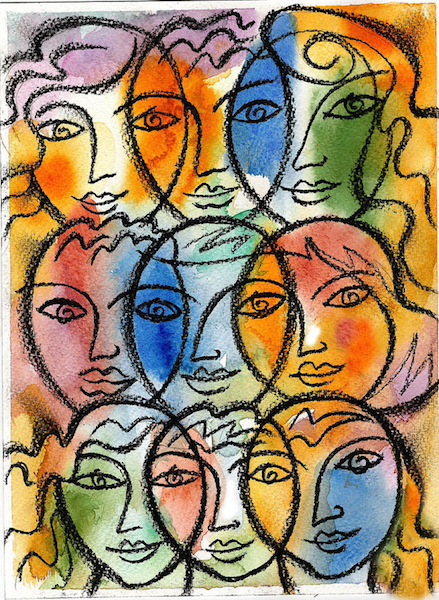 SAN FRANCISCO California—( Weekly Hubris)—15 July 2020—Many years ago, on my first visit to Greece, I visited the ongoing excavations at Nemea, a fine archaeological site which boasts a stadium where the Nemean Games were held, and a temple sanctuary of Nemean Zeus.

I’ve always been engrossed by all things archaeological and found the site rich with myths and history, but I was particularly fascinated by a comment the archaeologist, Dr. Steven Miller, made about evidence of a pitched battle having taken place within the temple itself. He speculated that this could not have been an act perpetrated by Greeks, who, even in their fierce territorial conflicts would not have dared to defile a sacred space. The invaders, he suggested, were probably not Greeks, and this act of desecration was meant to have immense psychological and political impact.

Dr. Miller’s words come back to me from time to time, stirring up vivid images of the deliberate brutality we humans are capable of. To what end, I wonder, are such acts justified? And why has the human race continued to behave this way for centuries?

The invaders in Nemea those hundreds of years ago left nothing worthwhile behind. Their only “legacy,” remnants of weapons and a scarred and broken temple. But perpetrators of violence don’t bother to consider legacy, I should imagine. Their only purpose is to inflict pain, to incite hatred, to kill, maim, and destroy, because of what? Greed? Fear?

The evil which possesses them at these moments of mayhem negates all semblance of empathy, renders them less than human, certainly less than animal. It plunges them into a state of nothingness. They become machines fueled by ideologies based on exploitation, manipulated by strutting megalomaniacs whose sole purpose in life is to gorge themselves on their false perception of power.

The bottom line is that both the manipulator and the manipulated not only unleash hell, but live in a hellish state themselves.

I watch our country suffer repeated acts of desecration, from mass shootings to brutality against people of color, and I’m seized with fury, grief, and fear for our future. I’ve seen firsthand what happens when maniacal leaders sanction acts of hatred.

Our scars are deep. Thousands of families mourn the death of children, husbands, wives, fathers, mothers, lovers, friends. Thousands killed by maniacs in a nation run by maniacs. And while I’m glad to see us rise up and protest, I fear that once the protestors go home, things will continue as before.

It’s essential that the passion the protestors bring to the streets metamorphose into organized and decisive political and social action. We must work towards replacing corrupt, bigoted, self-serving political leaders with people whom we can trust to further the interest of all Americans. And it is absolutely essential that, in our combined efforts to further the wellbeing of our society as a whole, we insist on an excellent educational system which not only functions to educate our children and young people in a wide variety of subjects, from science, the humanities, the arts, and sports, but also adds a choice of foreign languages which can and should be taught from the first grade. That’s when children are most receptive.

Why languages? Because in learning a foreign language of the her choice, the child learns to communicate and to understand a culture other than her own. It expands the child’s horizons; it celebrates diversity, and erases fear of someone who might look different.

There is no room in this world for “us and them.” This world demands an attitude of “us,” all of us within one human race. It demands our ending the demonization of “the other” by erasing the concept of “the other.”

It’s education that will get us out of the mire into which we keep sinking, I’m certain of it. And it has to begin at an early age. Can I say it any better than this?