“Foraging for sea urchins is a serious business, requiring special equipment: besides mask, snorkel, and flippers, one needs a net bag or basket for collecting them and a coupe-oursins. This item, invented by the French, of course, resembles the effete device that people like King Farouk used to decapitate soft-boiled eggs. We pry the prickly creatures off their rocks with the tip and slice them in half with curved blades that come together like a double guillotine to reveal their five segments of indescribably delicious orangey-yellow eggs.” —Diana Farr Louis 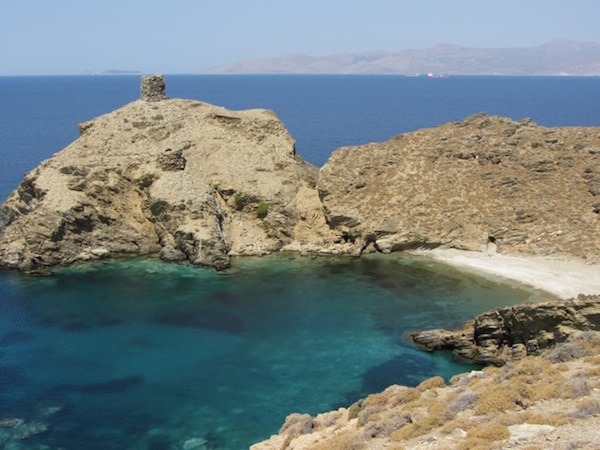 ANDROS ISLAND Greece—(Weekly Hubris)—9/8/2014—Yesterday, I took a favorite niece to a very special beach for a Lucullan feast. Protected by a ragged medieval watch tower and a typically Cycladic white-washed chapel, the little cove is blessed with peacock-blue waters that make South Sea Island postcards look insipid. The underwaterscape is just as colorful, pocked with pink-walled caves and tumbled rocks bristling with so many sea urchins they could be a new, aquatic breed of hedgehog.

There was just one other couple sunbathing, Italians in the nude, and the three of us set off for the hunt. Me with my basket and gear, niece and dawg in anticipation of what was to come (yes, Zinnia likes sea urchins, too!).

After a most delicious swim, where I chose the spiny creatures selectively, not more than one or two from each rock, we retired to a pocket-sized beachlet—what my spouse Joy of the People calls a gamistrona or “love pad”—out of sight of the bigger strand. And there we sat, opened, rinsed, and ate at least a dozen sea urchins each. Zinnia got three and seemed satisfied.

As we savored them, we reminisced, told each other stories of past urchin binges going back 50 years, and ranging from Turkey (fabulous) and other Aegean islands to Paris and Tokyo, where bright yellow egg segments arrive from Hokkaido meticulously packed in what look like cigar boxes.

But what really moved me was the expression of sheer bliss on my niece’s face, all cares erased, and the kiss she gave me by way of thanks. The setting could not have been surpassed: the beauty of our surroundings, the breeze in our faces, the sun on our backs, the water lapping our legs, the solitude . . . but it was the almost divine taste of those urchins that made it plus quam perfectum.

For those of you who have never had the full experience or who blanch at the idea of raw seafood of any kind, all I can say is, “I’m sorry for you, and hope there is something just as glorious in your life,” though I remain dubious.

Foraging for sea urchins is a serious business, requiring special equipment: besides mask, snorkel, and flippers, one needs a net bag or basket for collecting them and a “coupe-oursins.” This item, invented by the French, of course, resembles the effete device that people like King Farouk used to decapitate soft-boiled eggs. We pry the prickly creatures off their rocks with the tip and slice them in half with curved blades that come together like a double guillotine to reveal their five segments of indescribably delicious orangey-yellow eggs. Sqeamish men watching this operation call the tool “cojones cutters” and keep their distance. 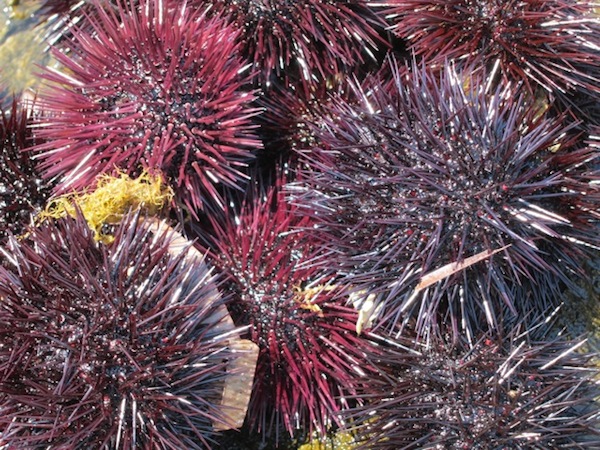 Diving for sea urchins is an atavistic pleasure that takes me back to the 60s and my first summers on Spetses. Our mornings there had a repetitive pattern we never tired of. At around 11 o’clock, my new Greek family and friends would scramble onto a caïque that would chug-chug us to one of many special coves. The best had pink-violet grottoes, flat rocks, and the plumpest spiny prey on the island. As soon as we anchored, we’d plunge in with knives and baskets and begin the hunt.

I soon learned which urchins to choose and how to scoop them into my basket without ending up like a pincushion. Then I could devote myself to the exquisite enjoyment of the undersea world in the embrace of the warm, clear Aegean, so different from the great grey greasy Atlantic of my childhood.

But if the collecting of our hors d’oeuvres was a form of solitary hedonism, the real pleasure came from preparing them and devouring them in company. If breaking bread together makes for companionship, think what bonds are forged by the ritual of cutting, cleaning, and sharing a mountain of caviar-producing shellfish.

The whole party would gather on the scorching rock, watching greedily as we’d laboriously slice through prickles (no coupe-oursins in those days) and rinse the insides to expose those radiant stars. As we worked, we’d remind ourselves that sea urchins cost 5 francs (about a dollar) apiece in Paris, which made our daily feast a luxury only millionaires could afford. 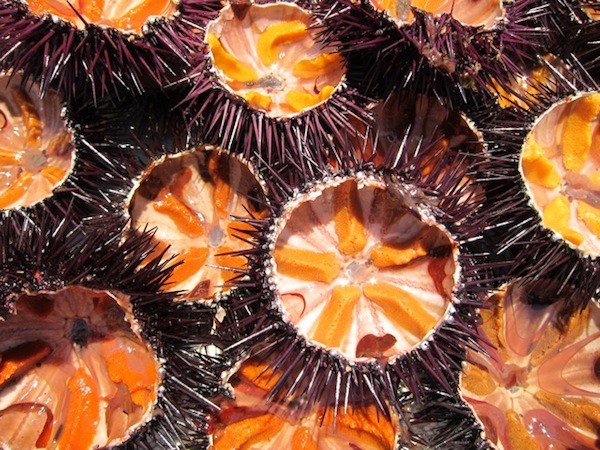 Sea urchins ready to be devoured.

But in Paris we would have had spoons, lemons, and etiquette, while here we were, practically naked, gobbling them right from the sea; lifting each segment from shell to lips with a finger or thumb; savoring each mouthful and noticing the subtle variations in flavor. Lemon would have made each urchin taste the same.

What do they taste like? A distillate of sea, with a touch of pine, salt, sun. Not fishy; not slimy.

Most of all, to me, and so many years later, they taste of memories; carefree sun-baked Augusts in the company of adored relatives and friends. One bite and I’m back on Spetses, in that brave new world that so beguiled me. But at the same time, whenever I perform these rituals, they never fail to create an atmosphere of blissful “now-ness”—gratifying all the senses and bringing smiles from ear to ear.

For me and my extended family, eating sea urchins on the beach is the quintessence of a Greek summer. So, let me end with my favorite Greek wish, “Kai tou chronou,” or “May we all be together again next year, fishing and eating sea urchins.”

Surely no Troika, home-grown or international, can take that away from us?

Well, I’m obviously not going to give you a recipe for sea urchin salad, omelette, or spaghetti, which would be superfluous. So here, instead, is one of my favorite recipes from my cookbook, Prospero’s Kitchen, an ideal summer dish. My niece went to sleep dreaming about it, so we made it together the next evening and had it for lunch after our sea urchin feast.

This is a dish that really should be cooked a day ahead, or at least several hours before you intend to serve it, because it is much, much better when it has had time to rest and absorb all the flavors. Resist the temptation to serve it hot, right out of the oven.

Sprinkle the eggplant slices with salt and leave them in a colander for at least 40 minutes to shed some of their liquid. Rinse and dry the slices well. Heat about an inch (2 ½ cm) of olive oil in a frying pan and gently fry the eggplant slices on both sides in batches. Drain on paper towels.

In another saucepan, simmer the tomatoes with salt, pepper, and sugar until a thickish sauce forms. Stir in the vinegar or wine. Arrange the eggplant slices in layers in an ovenproof dish, sprinkling chopped garlic between each layer. Pour the tomato sauce over the eggplant and bake in an oven preheated to 375°F/190°C for 30 minutes. Leave in the oven to cool and serve several hours later or the next day.

This goes well with fresh sourdough bread, feta, and plenty of wine: 6-8 servings.

Also: This column is dedicated to all Diana’s Greek nieces, every one of them a favorite, and is intended as an invitation to my beloved American nieces to come and join us.  Sea urchin photos by Petros Ladas, who has loved them since the age of one.