ANDROS Greece—(Weekly Hubris)—11/7/11—Well, it’s that time of year again, olive-picking time, and although we’ve been on the island for a week, strong, nay furious, freezing winds kept us inside winterizing the house rather than attempting to pull olives off our laden trees.

The wind finally subsided a couple of days ago, so out we went with our new equipment: special rakes for clawing the fruit from the trees, and huge plastic sheets for them to fall on.

The shopkeepers were amused. At each of the local hardware stores, we got the last rake and the last sheet. “You’re lucky,” they said. “We sold out really fast this year. Everyone’s picking olives—it’s ‘the crisis.’ [Euphemism for Greece’s economic and political meltdown] Even the people who wouldn’t dream of bothering normally are out there harvesting.”

But despite using the rakes instead of our hands to strip the olives, it took the two of us two days to strip two trees.

At this rate, we’d be here for another ten days. Not possible: we’ve got to go back to Athens and pay taxes. (Would you believe our bill for last year hasn’t arrived yet; it seems the Greek IRS ran out of ink! “They” hadn’t paid the supplier, who refused to deliver another tank of the stuff on credit and promises. So, all citizens are expected to report to their local tax office and find out what’s owed. The deadline is November 11th. You see what a vicious circle bankruptcy is?)

Never mind. We solved the olive problem with a picking party. With the help of four friends, one who spent the whole morning up a tree reliving her childhood, we almost finished the job.

The price: a splendid al fresco lunch of bean soup (recipe below), a green salad perked up with garden-fresh arugula and pomegranate seeds, local cheese, last year’s olives, and quite a lot of fermented grape juice.

But I’m knackered, not quite able to spin out a proper column. So here’s last October’s dissertation on the bounty of our land in fall which, this year, was augmented by the enthusiastic participation of our two quince and pomegranate trees.

There is still so much to be grateful for. Our kitchen table looks like an ad for a harvest festival, with only the pumpkins missing. 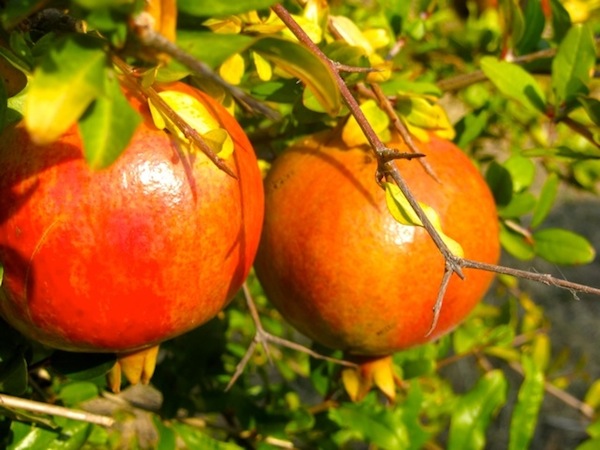 Can there be a more beautiful fruit?

ANDROS Greece—(Weekly Hubris)—10/11/10—A month ago, I received an email from a friend: “I’ve been trying to call you. Never any answer. You’re probably out picking something.”

Her complaint sums up the past four months on Andros. There has always been something to pick. Right now, it’s almonds.

Joy of the People [the columnist’s spouse, whose name torments both author and editor in its utterly irreducible nature: you just cannot call Harilaös “Joy,” or “JoT,” or somesuch] has been collecting them for several weeks. We only have two producing trees (and about five of their “children”) but like the plums earlier they’ve gone into overdrive.

Yesterday, I decided to help finish this business. We took the stepladder and I plucked the straw-colored nuts off the branches I could reach, striking at the higher ones with a shepherd’s crook from Epirus. The trouble with that technique is all the almonds scatter amidst stubble the same shade as they are. And mingle with the litter of empty grey outer shells discarded during previous efforts. Chances are we missed a few.

Actually, I’d been on my way to pick olives when the almond trees beckoned. We have about 30 trees, some of which we planted before we built the house, just over 20 years ago. The older trees bear Kalamata and Amphissa olives—the shiny, black, tear-drop variety; and the large round ones, which may be eaten either green or black.

The Amphissa trees are disappointing this year; the few olives still on their branches are bruised and misshapen. A horrible, minute fly, called dakos in Greek, lays its eggs in the fruit and they hatch into repulsive, white, wiggly, millimetre-long worms that destroy the olives. The Kalamata trees are plagued with dakos also, but a couple of them have managed to produce some pretty fat, flawless fruit.

I pick them one by one, polishing the dark satiny skin with my finger in search of the telltale pinprick that means it’s inhabited. Some are obviously blemished, and the ground beneath the trees is spattered with windfalls.

Our trees don’t obey the rules. The olives shouldn’t be ripe for another month. That’s when the oil press opens and I can only hope some will hang on until then. Especially the tiny Lianolia olives that, surprisingly, contain far more oil than their plump counterparts.

I remember our first olive crop. It must have been about ten years ago. We’d been so excited, stripping the fruit from our Kalamata and Amphissa trees. We filled several shopping bags and took them up to the press in Ano Gavrio, above the port.

Our corner of Andros has two presses, one an EU-approved, spic-and-span, high-tech operation, and the other in a funky old-fashioned barn. You need a thousand kilos of olives to go to the modern press; we must have had about 10.

Yorgos, the owner, a kind-faced member of Gavrio’s extended Mamaïs clan, smiled when he saw our load that October morning. It must have been the smallest on record. But business was slow that day and he decided to humor us. First things first, though. He invited us into his kitchen and poured us two shot glasses of tsipouro (think grappa) for us and one for himself. Then he and “Joy” entered into an intricate analysis of the current political situation . . . while I talked to his ancient but witty mother, who offered us some of her homemade creamy cheese.

It must have been about an hour later before we made the move across the road to the oil press. Unlike the house, the building was dark and grimy. A thick layer of grunge from countless years of handling and pressing olives covered every surface. As Yorgos weighed the olives and put them in the washer, a cow poked her head in and several chickens clucked and scratched in the dirt. Flies bombarded us, alighting on the scales, olive bags, equipment, everywhere. I wondered whether the floor had ever been swept.

After a while I ignored it. Perhaps all those layers of oil act as a shield, keeping germs at bay—just as when babies are anointed with it in an Orthodox baptism, they say the Holy Unction wards off the Devil.

The press itself stood at the back of the room, a giant corkscrew that swiveled down onto some 20 round, woven-rope mats, where Yorgos spread the olives after putting them through a crusher.

As he worked, he gave us a lesson in olives. “You know, of course, you won’t get much oil from these,” he frowned, shaking his head. “They’re not for oil; they’re for eating.”

“But,” said I, “surely they must have some oil. They’re so fat and juicy.”

“You’ll see. And they’re all black, a bit too ripe. The little ones are much more productive. Plus, some seem to have dakos too. Never mind. Those damn flies plague all our trees.”

Despite the warnings, we watched eagerly as our oil trickled out of the pipe. It was golden, not the more desirable green that comes from a mix of ripe and unripe olives. And it filled one plastic water bottle. We got all of 1 ½ litres, hardly enough for a week’s cooking, but it was ours. And we loved it.

Yorgos didn’t even charge us for the trouble.

Since then, we’ve been back several times to Yorgos’s press. It has been cleaned up, slightly, since that first visit. And our olives have been more bountiful, slightly. The welcome is always as warm, lubricated with tsipouro and politics, even on days when there’s a line of pick-ups waiting.

He’s a reminder that some of the rewards of picking are social, not solitary. And that goodliness if not godliness has nothing to do with cleanliness.

This is often called Greece’s national dish. It’s filling, delicious, cheap, and easy. I suspect we’ll be eating rather more of it than usual this winter.

5-6 celery branches, chopped (Greek celery looks like parsley and tastes much stronger than the US Pascal variety)

Wash the beans and soak them overnight in cold water to cover. Or, if you’re in a hurry, bring them to the boil in plenty of water, cover, turn off the heat, and let sit for an hour or longer.

Drain the beans and start over again with fresh water.

While the beans are cooking, sauté the chopped fresh vegetables in a little oil until wilted. Add them, the bay leaves, and chili flakes to the beans and reduce the heat to medium high. When the beans are softish, add the tomatoes and tomato paste, and finally pour in some more olive oil. This is a matter of taste, but I must have added about ¼ cup (60 ml); maybe more.

But don’t add the olive oil until the beans are relatively soft. They say that tomatoes and oil prevent beans from softening up. Cook the soup until all the flavors blend and all the veggies and beans are tender. Like anything else cooked with olive oil, this will be even better the next day. I made it for the olive pickers the night before. This will feed 8 hungry people.

(For cooks in Greece, add a half bunch of kafkalithra (tordyllium). Its sweet aroma adds a certain something.)