“And before that, my mother singing ‘I’m a Poor Little Petunia in an Onion Patch,’ my father making up bedtime stories hilarious and delightful. The little Ling-Po, making his way through the Himalayas with his best friend, a little (of course) yak. I have a feeling that story followed the Chinese invasion of Tibet, as Pop tended to make me aware of what was happening in the world. Then, with no basis in reality, the little Teetot, a kitten, who wanted to buy shoes from the Florsheim store at the corner of Clark and Division, and couldn’t make the purchase because he couldn’t put all four feet in the X-ray sizer.”— Jean Carroll Nolan

SEASIDE California—(Weekly Hubris)—January 2018—You know those pictures of a fly’s eye? The ones in which the eye looks like a geodesic dome or a disco ball? That is how I feel looking back over my life, trying to pick out a seminal event, the piece of art that opened the door for all the others to follow. Each mirrored, angular lens of the eye is filled with a different image, no one, as Napoleon the Pig would note, more equal than the others. So, with all due respect to my editor, I have chosen a coward’s way out.

In art, you see, I want to demand a gateway piece in each discipline. I cannot find “the one.” And this is not intellectual laziness. It is simply the result of having been so constituted as to encounter each school with what my son’s Aikido dojo used to call a “beginner’s mind.” A type of senility separated these revelations, so that the pure, open eyed sensual delight that walks hand in hand with each muse, jolted me every time. I could feel the new form, dance, painting, sculpture, music, poetry, theater, literature, working its way into my soul. I was well and truly swept away each time I met an art up close and personal, and luxuriated in finding out as much as I could about the form, drawing it, so as to preserve it, in the case of performances, and listening obsessively to recordings in music.

In the fly’s many faceted eye, then, and in no particular order, a brief list of such poignant occasions. I have noted the primary source of each of the “firsts,” when I can identify it, myself. It will quickly become clear that my family played an enormous role in my education. My brother is a little more than nine years older than I, and so, in effect, I grew up with three caregivers. In the main, I viewed this as a privilege, though my mother used to tell me I complained, bitterly, when I was three, of having three parents, instead of two. Now, I know how lucky I was.

My brother reading me “Cyrano de Bergerac” and “Henry IV Part 1.” I learned that poetry made my throat swell, made my voice unreliable, and that Shakespeare could be deliriously funny. (The two men in buckram, who become an entire army by the time Falstaff is through reciting the tale, reduced me to helpless giggles, and still do.)

I was taken by grown-ups, can’t recall which one(s), to the Art Institute, where I met the Impressionists, and was lifted all but off my feet by the colors, the shading, the explosion of light. It soared in my mind, and I dutifully and rather pathetically tried to duplicate Impressionism with a No. 2 lead pencil, and typing paper. I wanted, you see, to hold on to the feeling it gave me. And the Thorne Rooms, surely the best exercise gym for the imagination ever provided to grubby children.

In fourth grade, Mrs. Martin, one of the finest teachers who ever lived, seduced us with lovely museum quality plates of Greek sculpture, vase paintings, and crockery. The vase paintings never grabbed me, but the Discus Thrower sure did. That was the beginning of a lifelong flirtation with sculpture, never an artist, always an ardent appreciator. And my father, on our long, long walks, made sure I saw the good, basic architecture of Chicago, and also pagodas.

My brother, introducing me to D’Oyly Carte’s production of Gilbert & Sullivan’s “Pirates of Penzance,” Christmas time, at the Civic. And, again, when he took me to see an impossibly young, astonishingly energetic Russian defector named Nureyev.

My brother gave me classical music, “Beethoven’s Ninth,” “The Ride of the Valkyries.” The Stills (at school and out) nurtured this predilection, taking me to Ravinia for rehearsals, playing rats through a maze with oboe solos.

Lawrence Olivier’s “Richard III” and “Henry V” I owe my mother, while my father provided film noir and “The Golden Age of Comedy.”

Every member of my immediate family gave me literature. I grew up knowing that the only absolutely necessary things in life were food, water, air, shelter, and books, as well as a select handful of magazines. The Atlantic, The New Yorker, Sports Illustrated made the cut. We were blue collar democrats, so we read the Sun Times, though we always bought the once a year issue of the Tribune that featured John McCutcheon’s “Injun Summer.” My brother taught me always to read sports, because everyone wanted to write sports, and so the eventual columnist or reporter was likely to be the best wordsmith at the publication. Thus, Roger Angell on baseball, Herbert Warren Wind on yachting and tennis and golf, Red Smith on everything, boxing, horseracing, everyball, and whatever happened to tickle his fancy on any given day.

So, from Mom, Josephine Tey, royal biography, historical fiction. From Pop, Winston Churchill, James Breasted and “True Detective.” My brother (again) abandoned his “Iliad” and “Odyssey” at home when he left for college, the year I was eight. I read them. Not brilliant translations, but compelling stories. Horses! Sex! Battles! A plot I could sort of follow, instead of having that horrid, everybody-gets-it-but-me feeling I often did trying to keep up with three intelligent, well-read adults. It was a joy and a revelation. On my own, I discovered Euripides, and fell in love with what seemed to me to be a formalized version of Tennessee Williams, without all the Southern baggage.

Before these experiences, Kipling’s politically incorrect but magical Jungle Book. Bagheera was my first literary love. Interestingly, despite the colonialism peeping through, the animal stories in the Jungle Book captivate children of all backgrounds up to this day. When my kids were young, and it was National Reading Day, I went to school to read each kid’s class a story. I was reading aloud the Jungle Book, and realized, at one point that, in a more correct time, some of what I read could be viewed dubiously. However, at the end, the children, the African-American, Vietnamese-American, and Mexican-American children, only heard the wonder of the animals, and their honor, and their courage. I went back for three successive years and, every single time, the kids voted for the next story of the Wolves, and Kaa, and Baloo, and Mowgli. They understood that the Jungle Book movie was not at all the same as the book.

And before that, my mother singing “I’m a Poor Little Petunia in an Onion Patch,” my father making up bedtime stories hilarious and delightful. The little Ling-Po, making his way through the Himalayas with his best friend, a little (of course) yak. I have a feeling that story followed the Chinese invasion of Tibet, as Pop tended to make me aware of what was happening in the world. Then, with no basis in reality, the little Teetot, a kitten, who wanted to buy shoes at the Florsheim store at the corner of Clark and Division, and couldn’t make the purchase because he couldn’t put all four feet in the X-ray sizer.

How, how, I ask, do I choose? I can’t. How any family with so little money spent so much time on the arts, I don’t know, but we did. And that leaves me stranded, unable to pick the moment that I was washed in the light. Perhaps because of the lack of funds, I spent more time drawing and reading than many of my contemporaries. My mother worked two jobs, and my father drank heavily, so I spent many hours alone, though there was always an adult within reach. A sleeping father is still on duty. But, he slept in the evenings, and we did not have a television, so all of these delights I have enumerated served me as friends, as companions, as comforters. My relationship with them is still, as it has always been, insofar as I can recall, one of grateful pleasure on my side and endless generosity on the other.

Choosing one is not possible. All I can say is that if I could go anywhere in the world to look at or watch any art, I would go to the caves in France, with their spare, elegant decorations of ocher and black creatures, leaping and dancing on the walls. These fascinate me, as do the handprints in other caves, because they are an attempt to freeze feeling, to keep the joy of the hunt, or a good meal, or just the fact of existence. Like baseball, art, in all its forms, should be enjoyed and participated in, and those ancient artists speak very clearly of our common humanity. 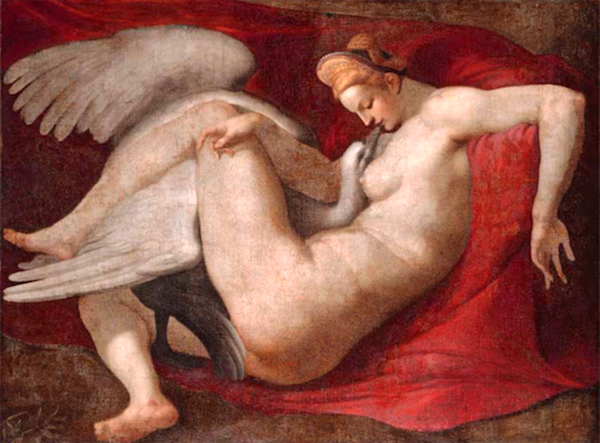 Exhilaration is what I recall,
Not pain, nor grief, nor fear. My ravished soul
Leaned on the downy chest. This was no fall
From grace. This was a leap, its goal
To feel again the piercing, sweet; so sweet,
The dissolution of the world I knew,
The subsumption of the busy street
Replaced by images and sound and hue.
And lions watched me as my lover whirled
Me through the galleries, the halls, the rooms
Wherein lay treasure; watched us as we curled,
Around each other. Saw us dance on tombs,
Laughing at death. I was no tender fawn,
Despite my innocence. I loved the swan.