“The projected rate of climate change based on IPCC-style gradualism outstrips the adaptive response of vertebrates by a factor of 10,000 times. Closer to Homo sapiens, mammals cannot evolve fast enough to escape the current extinction crisis. Humans are vertebrate mammals. To believe that our species can avoid extinction, even as non-human vertebrates and non-human mammals disappear, is classic human hubris wrapped in a warm blanket of myth-based human supremacy. The evidence indicates humans will join the annihilation of all life on earth. After all, humans are alive (some more than others).”—Guy McPherson 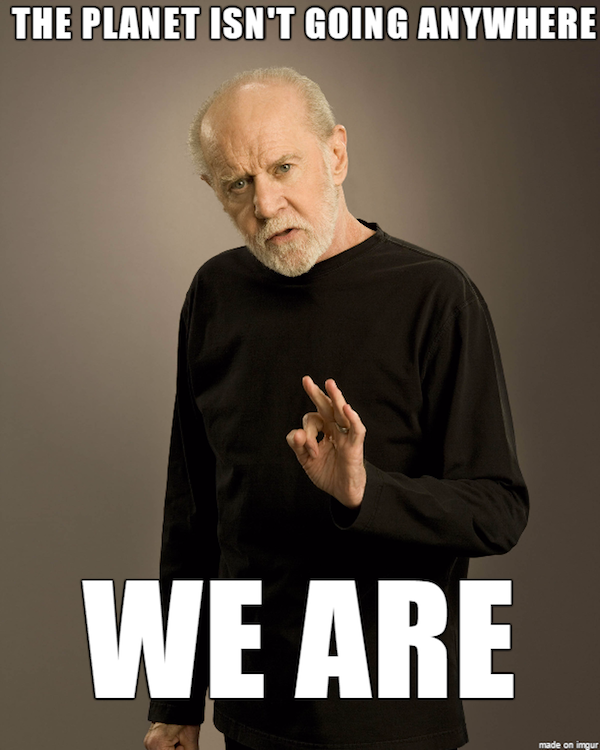 “Just cause you got the monkey off your back doesn’t mean the circus has left town.”—George Carlin

“We make ourselves miserable by first closing ourselves off from reality and then collecting this and that in an attempt to make ourselves happy by possessing happiness. But happiness is not something I have, it is something I myself want to be. Trying to be happy by accumulating possessions is like trying to satisfy hunger by taping sandwiches all over my body.”–Roger J. Corless, Vision of Buddhism: The Space Under the Tree

MAITLAND Florida—(Weekly Hubris)—February 2020—In May, 2018, United States President Donald Trump referred to undocumented immigrants from Central America as “animals.” He received a lot of criticism for the remark, although he was correct: Humans are animals. Afflicted with a severe case of human superiority, we consider it an insult when we are, correctly, called, “animals.” As a result, hardly anybody who belongs to the species Homo sapiens uses this language when referring to our own species, Homo sapiens.

Humans differ from non-human animals in several ways. We have proportionately larger brains, language more complex than most other animals, and the ability to foresee our own, individual deaths. We can go a step further and foresee our own extinction, too. Extinction refers to the death of all individuals of a species.

Unlike a vast majority of other species on Earth, humans are capable of destroying our own habitat. Not only are we capable of destroying the habitat that sustains us, but we are obviously willing to destroy our own habitat. Witness the difficulty for humans attempting to grow food in the Middle East, northern Africa, and Central America, hence driving the ongoing refugee crisis. Witness severe flooding throughout the world. Witness the world on fire. Witness lethal wet-bulb temperatures, especially in tropical and sub-tropical areas. Witness saltwater encroachment, aka seawater intrusion, into aquifers. Witness the acidification of oceans, occurring at a rapid pace, according to a paper in the 26 August 2019 issue of “Nature Climate Change.” As one result of this latter phenomenon, diatom silica production is rapidly declining. This rapid demise in plankton is of primary concern to those of us who depend upon the ocean for food or oxygen. Finally, witness deoxygenation of the ocean, as summarized in the following paragraph.

According to the conservative, peer-reviewed “Scientific Reports,” ocean deoxygenation could become a major issue by 2030. There are obvious, ongoing harbingers. Ocean deoxygenation can occur very rapidly, as reported in the August 2017 issue of “Science Advances.” The latter paper mentions, quite importantly, that dead zones in today’s oceans bear remarkable resemblance to those during the Cretaceous. As pointed out in an article in the 19 December 2018 issue of “Science Advances,” “ocean oxygen loss may, thus, elicit major changes to midwater ecosystem structure and function.” As expected, plankton productivity is plunging as the base of the marine food web is destroyed by rapid changes in the world’s oceans.

We have been warned about the adverse consequences resulting from global climate change for generations. In 1847, American naturalist George Perkins Marsh predicted anthropogenic climate change as a result of burning fossil fuels. American filmmaker Frank Capra issued a warning in 1958. United States President Lyndon Baines Johnson followed suit in February 1965. We were ”running out of time” to deal with greenhouse gases in 1965, according to the chief of the American Petroleum Institute.

Austrian philosopher Ivan Illich wrote in his 1973 article in “Le Monde”: “the impact of industrially packaged quanta of energy on the social environment tends to be degrading, exhausting, and enslaving, and these effects come into play even before those which threaten the pollution of the physical environment and the extinction of the (human) race.”

Six years later, it was Edward Teller informing Big Oil they needed to change. Exxon accurately predicted where we were headed in 1982, and not only failed to heed the warnings, but kicked the warnings and the future of humanity to the curb. Al Gore and Carl Sagan testified to Congress in 1985 that we must act now on climate change. In late June, 1989, Noel Brown, the director of the New York office of the United Nations Environment Program indicated we had only until 2000 to avoid catastrophic climate change. About 16 months after Brown’s warning, the United Nations Advisory Group on Greenhouse Gases set 1 C as the absolute upper limit in October 1990. Climate speaker and writer David Spratt said 0.5 C was the upper limit in October 2014.

These abundant, passionate warnings were ignored for so long, they became irrelevant. Knowledge of the aerosol masking effect suggests we have created a scenario from which there is no escape, as I described in the September, 2019 issue of “Clinical Psychology Forum”: “Continuing industrial activity drives us and many other species to rapid extinction, yet slowing or stopping industrial activity forces an even faster path to extinction.”

The projected rate of climate change based on IPCC-style gradualism outstrips the adaptive response of vertebrates by a factor of 10,000 times. Closer to Homo sapiens, mammals cannot evolve fast enough to escape the current extinction crisis. Humans are vertebrate mammals. To believe that our species can avoid extinction, even as non-human vertebrates and non-human mammals disappear, is classic human hubris wrapped in a warm blanket of myth-based human supremacy. The evidence indicates humans will join the annihilation of “all life on earth,” as reported in the journal “Scientific Reports” on 13 November 2018. After all, humans are alive (some more than others).

The situation is worse than I have indicated so far, of course. One segment of industrial civilization is on a path to catastrophically overheating the planet. Commercial air travel is sufficient to cause the extinction of all life on Earth. According to a 27 June 2019 paper in “Atmospheric Chemistry and Physics”: “The contrails left by aeroplanes last only hours. But they are now so widespread that their warming effect is greater than that of all the carbon dioxide emitted by aeroplanes that has accumulated in the atmosphere since the first flight of the Wright brothers.” Adding to the existential risk from commercial air travel is a peer-reviewed publication pre-printed 12 December 2019 indicating its effects on atmospheric circulation are sufficient to endanger all life on Earth.

It is difficult to imagine such destructive behavior from any species, much less the one that declares itself the wise ape (Homo sapiens). Perhaps we are not nearly as wise as we are clever. As the masterful social critic and American comedian George Carlin used to say: “We have multiplied our possessions but reduced our values. We talk too much, love too seldom, and hate too often. We’ve learned how to make a living but not a life. We’ve added years to life, not life to years.”

As it turns out, we have become victims of the circumstances we have collectively created over many generations. The pursuit of material possessions, a product of evolution by natural selection, has consequences, after all. So, too, does our desire to point out our differences, rather than our similarities. Identifying the “other” sows the seeds of discontent while rationalizing fear-based competition.

Personally, I am pleased to be an animal. For the most part, I enjoy humans and other animals. I just wish we could employ a little humanity in the name of dignity and respect for all animals, including humans.