The Big Guy, My Favorite Art in the World

“Michelangelo has created an object, a statue of a man, that through its pose, its surface, its weight and angles, its proportions and material, its magical being, its gorgeousness, opens a glimpse into a loftier world that exists here and now, though we are mostly oblivious to it.”—Jerry Zimmerman 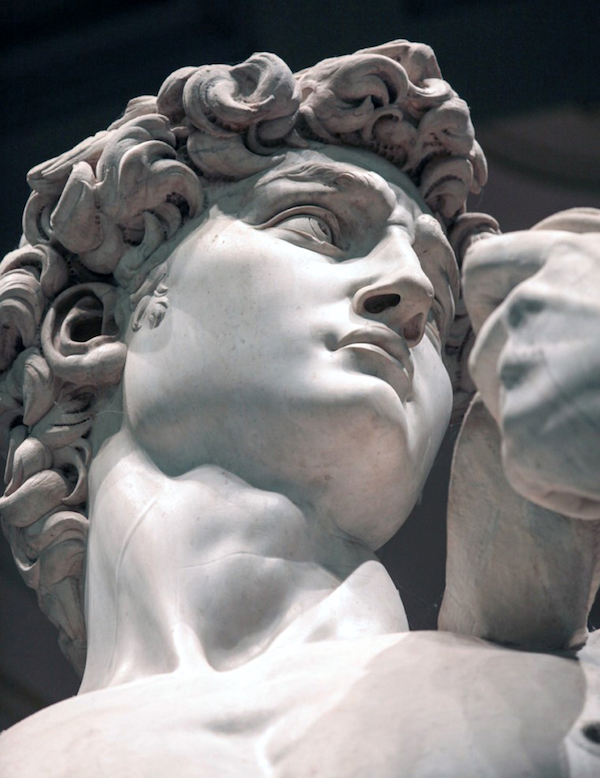 The head of David, by Michelangelo.

“The promises of this world are, for the most part, vain phantoms; and to confide in one’s self, and become something of worth and value is the best and safest course.”—Michelangelo

“Art is not the application of a canon of beauty but what the instinct and the brain can conceive beyond any canon. When we love a woman we don’t start measuring her limbs.” —Pablo Picasso, Picasso on Art: A Selection of Views

TEANECK New Jersey—(Weekly Hubris)—December 2018—I have been an art student, an art teacher, a commercial artist, and an art lover my whole life and, over and over again, with everyone, artists and non-artists alike, this question always comes up: What is Art?

After developing my skills to create art to my highest ability; after endless discussions with peers and professors; after seeing countless museums and galleries and art books; after spending almost 20 years teaching art to freshman at the School of Visual Arts in New York City, which involved, almost daily, if not hourly, discussions and explanations as to why a student’s painting of a green baby might be considered “Art” or perhaps something really quite a bit NOT “Art”; after a lifetime of trying to understand what “Art” is . . . I am ready and willing to give you my answer: David, David, David!

Michelangelo’s beyond-masterpiece is the most cathartic, jolting, mesmerizing, confounding, and simply beautiful piece of art ever made by a human being in the history of the world.

I have been aware of this statue since my teens, seeing pictures of it probably more than a thousand times. I am now also one of the fortunates who have seen it in person, one time.

Fourteen years ago, my wife Rhona persuaded me, finally, for the first time and for god’s sake!, to take a trip to Europe. So, off we went to Italy. We visited Cinque Terre and Venice, both crazily fun and exhilarating, yet my life took flight in an instant while in Florence at the Galleria dell’Accademia.

Walking into the museum, we were astonished by the paintings and sculptures arrayed along the walls. In a bit of a daze from being surrounded by such overwhelming beauty, I walked through the next archway, went around a corner, looked up . . . and began to weep.

At the end of a long, high-ceilinged hall, filled with even more exquisite art, was a rotunda, a circular space, lit from above, seemingly by moonbeams, the light washing down on a towering young god, THE David, his presence radiating the power of barely contained nuclear fusion, invisible waves of the human known and the holy unknown shooting out and washing through me, cementing me to my spot, filling me with unbounded joy and gratitude. I was out of my mind. 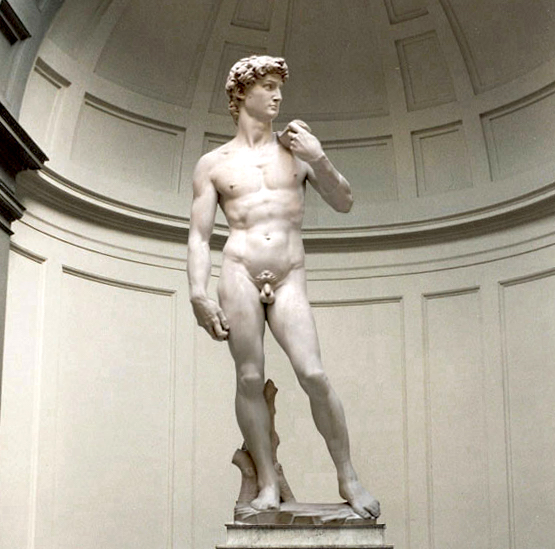 My joy was the joy of experiencing transcendent art, art that lifts the veil from normal life, allowing a glimpse into the best possibilities inherent in each of us. It was a tangible moment of connection with higher forces, with the David opening the way. Michelangelo has created an object, a statue of a man, that through its pose, its surface, its weight and angles, its proportions and material, its magical being, its gorgeousness, opens a glimpse into a loftier world that exists here and now, though we are mostly oblivious to it.

I was struck by all the unknown forces on and off the planet that had conspired to allow me to be standing before this astounding artwork. My deep gratitude was for Rhona’s intuitive masterminding that had made this happen.

That moment has never quite left me. Even now, writing about my experience there in Florence, I am flooded with the same powerful reactions I had in that amazing face-to-face so many years ago.

Why? What is this?

This is real Art. To me, to be real Art with a capital A, a work created by the hand and heart of a human being must present you with something enduring, something that will not dissolve in time but rather grow and show its energy to you over and over again.

The statue of David is Exhibit A.

In the annals of human endeavor, the creation of the David is the masterpiece of sculpture, a 14-foot-high, unbearably beautiful young man made from one solid piece of marble. Michelangelo did not actually “sculpt” this man. As he himself wrote, he allowed him to escape from the marble: he chipped away everything that was NOT David! This was only possible because Michelangelo had been able to fully see and understand the finished statue in its entirety before he first dared touch chisel to stone. 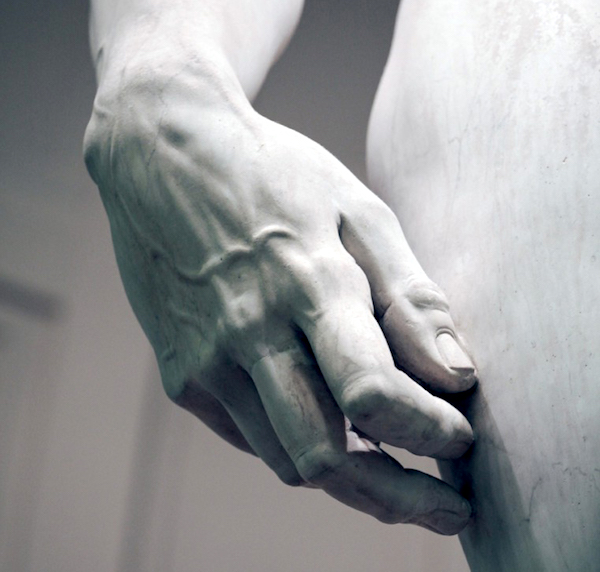 The hand of David.

The physical art of this statue is mind-boggling. Yet there are other remarkable giant figures by other sculptors that are also amazingly realistic and impressive, many of them close by in Florence, itself. Yet why does the David continue to stand out from all the rest after over 500 years?

The exquisite craftsmanship and heart-stopping beauty are apparent to everyone who sees this statue: we all seem to agree then that this statue is a definitive answer to “What is Art?”; that seeing the David a second time (or a 30th time or even a hundredth time) will still bring the same awe all over again.

Yet there is something much more to this piece of art, something beyond its genius of technique.

I practice the martial art of Aikido. Its core teaching is an understanding that we are training to “polish our souls,” learning to become our best selves. The Founder of this art often referred to Aikido as being “between Heaven and Earth.”

Michelangelo’s David is just that, an icon situated between the dross and the divine, between our feet on the ground and our hearts searching for our gods. The David is the Art Prophet/Angel that announces the “other,” the more exalted purpose for us mortals beyond our daily workings and strivings: it is a marble bridge of aspiration between heaven and earth. 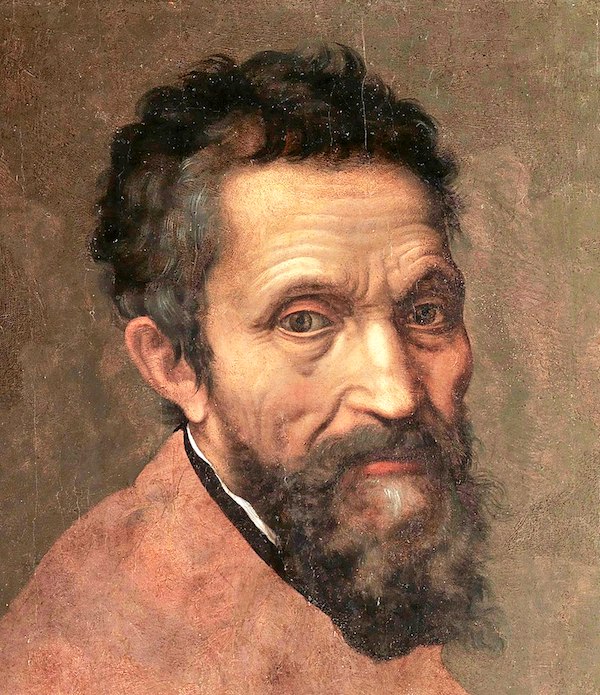 The unworldly skill needed to create the David is only surpassed by the living soul somehow embedded in this stone man standing confidently in the middle of Florence. He resonates as a goal, an example of everyone’s fullest being, physically stunning, at ease with his human prowess, poised to take on the rigors of life with a fearless grace.

Isn’t this the real super-hero we all wish to be? Not imaginary beings, flying around with capes, but humans, contained within ourselves, in touch with the immense power of searching for the truth of our lives?

Michelangelo, a mortal man, created a sublime image of the divine within us, an image whose power is understood by all who stand wonderingly in front of it, if even if for just one moment.

He created the David.

It’s the answer to the question. It is Art.

Note: All images of Michelangelo’s “David” via Accademia.org.