The “Keeper” of the Peace of Karlowitz

“We had one more stop before leaving for Belgrade. I had to find some tangible connection with the Treaty of Karlowitz. I spoke briefly to the local tourist office, whose guide handed me a map and answered absently that there was a church, called Kapela Mira (Peace Chapel), built on the site where the treaty was signed. I, of course, insisted that we find that church.”—Alexander Billinis

Petrovaradin Fortress, seen from across the Danube at Novi Sad.

CLEMSON South Carolina—(Weekly Hubris)—December 2017—Not many are familiar with the Treaty of Karlowitz signed at the town of the same name in 1699. The Treaty ended—for a time—the series of wars between the Austrian-led Christian forces and the Ottoman Empire.

After a second, failed attempt to conquer Vienna in 1683, the Turks’ wave of conquest receded southward and eastward, as the Austrians, Poles, Russians, and various German states pushed the Turk out of Central Europe and back into the Balkans. In 1699, the exhausted combatants sheathed their swords at a small village on the Danube, and ratified a huge transfer of territory out of Turkish hands.

For Eastern Europeans, few dates have greater significance. As I was to find out, for my family, the significance was beyond just the historical.

My now wife Vilma and I were engaged back then, and visiting her family in Serbia. From her hometown, Sombor, a mere 20 kilometers from Serbia’s northern border with Hungary, to Belgrade, Serbia’s capital, was about 180 kilometers (112 miles) as the crow flies. We of course, were a young couple in love, and preferred a more leisurely route and pace hither and yon, with plenty of stops in between. One of those stops, I decided, had to be in Sremski Karlovci (the Serbian name for Karlowitz).

From Sombor, reaching Novi Sad, Serbia’s second city, took us about 90 minutes. Here, we had a quick breakfast and coffee in a bistro by City Hall, in the shadow of a Gothic cathedral. We then headed towards the Danube River to cross over into Petrovaradin, its heights crowned by the fortress of the same name.

The lower village was an elegantly decaying, compact town characterized by 17th-century Baroque architecture, a contrast to the concrete, ten-story apartment blocks lining the Danube in Novi Sad. On high ground here, a fortress stands guard, one of Europe’s largest. Petrovaradin, settled since the Paleolithic Era, was fortified by the Austrians in the 1690s to the era’s most exacting and latest military architectural standards, ensuring that, as our amateur guide later told us, “the Turks would never cross the Danube again.”

We met our “guide,” a history student from Novi Sad University, in a café outside the vaulted, arched entrance to Petrovaradin Fortress. Hearing us speak English, he came forward and volunteered his services. Not for the last time in Serbia, we had a fascinating, historically significant site almost exclusively to ourselves, and a guide well versed in its history and architecture, as well as refreshingly opinionated.

While acknowledging the superior technology of the Austrians, he reminded us that the labor and the soldiers comprised, by and large, local Serbs, or Serbs recruited from farther south. Often enough the glories of empire, both analog and esoteric, are brought forth on the broken backs of forgotten minorities. We need only look to US history for examples. After our tour, we treated our student guide to lunch in the fortress café, and then were off through undulating, vine covered hills to Karlowitz, known to Serbs as Sremski  Karlovci.

Easily one of the prettiest towns in Serbia, Sremski Karlovci has many historical monuments of great significance to Serbian—and European—history. After the Turks were expelled farther south, beyond Belgrade, the town developed as a small riverine port and as a spiritual and intellectual center of the Serbian people. Here the Serbs settled, in Austrian territory, building schools and eventually moving their religious headquarters—the Serbian Patriarchate—to this lovely amphitheater of a town. 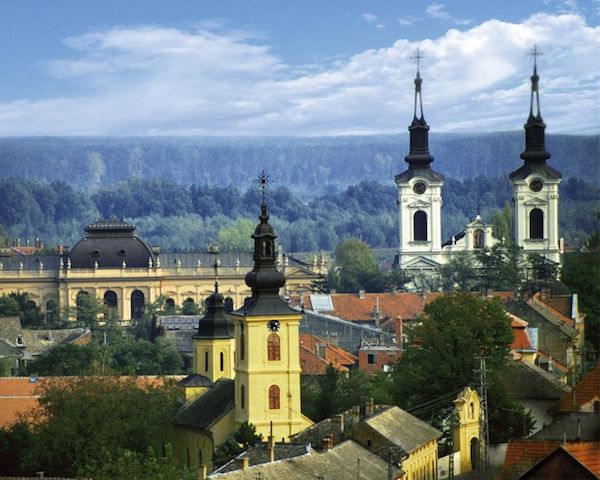 In addition to  romantic strolls and a lovely dinner in a local podrum (literally “cellar” but analogous to a taverna), we visited the former seat of the Serbian Patriarch. Vilma introduced us in Serbian and, as we attended periodically a Serbian Monastery Church in Chicago, we mentioned some of the clerics we knew there, and the doors were opened wide to us. Our guide was a well-traveled Serbian priest who knew the community in Chicago. He guided us through elaborately ornamented chapels and chambers, but the most moving part of the tour by far was an exhibit housed in a long, arched, whitewashed hall.

Here were icons and frescoes hundreds of years old, rescued in haste from Serbian churches and monasteries in Croatia as the Serbians fled in 1995 from lands they had lived in for generations. Fragments of iconostasis rescued from the chaos of war saddened me, as the work was priceless and expressed in graphic form the spiritual and temporal yearnings of a fellow Byzantine people.

When I remarked on the Baroque style of painting and decoration in Serbian churches in the formerly Austrian-controlled parts of the country, so different from the Byzantine style more typical of Serbian and Greek Orthodoxy, the priest not so gently reminded me: “The Byzantines—your people and ours—brought the Renaissance to the West. This art is ours, returned to us.” His was a theory of cultural or artistic recycling that I could not help but like and, though I was not totally sure of its accuracy, there seemed more than a kernel of truth to it.

We had one more stop before leaving for Belgrade. I had to find some tangible connection here with the Treaty of Karlowitz. I spoke briefly to the local tourist office, whose guide handed me a map and answered absently that there was a church, called Kapela Mira (Peace Chapel), built on the site where the treaty was signed. I of course, insisted that we find that church.

The tourist map was hardly detailed, and this was the era before smartphones, so we relied on the now defunct arts of map reading, dead reckoning, and asking for directions to arrive, in the high heat of early afternoon, at our destination.

Here, where Central abuts Southern Europe, summer siestas are not that uncommon, so we were arriving at a somewhat untoward hour. That said, the church was supposed to be open, so we knocked on the wood and wire gate and at a nearby cottage. A fiercely sunburned man emerged onto the porch, groggy from sleep, perhaps induced by pivo (beer): there was an empty bottle on the table next to his couch. Vilma, somewhat apologetically, explained who we were and that we wanted to see the memorial church. 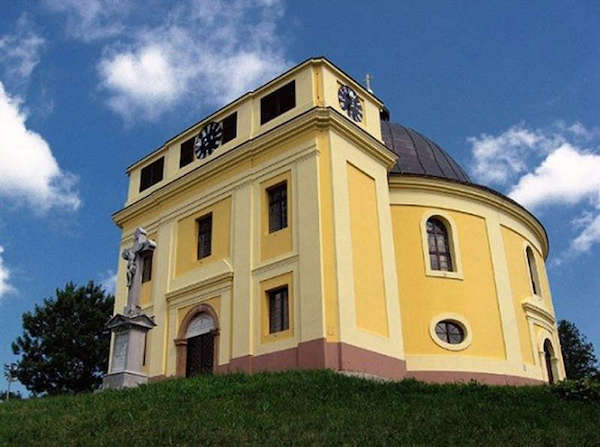 Kapela Mira (Peace Chapel), a memorial on the site where the Treaty of Karlowitz was signed.

Leading us up a small grassy incline, the man’s humor revived a bit. We entered a small Catholic church, built by the Austrians in gratitude for their victory against the Turk. The circular church had four doors, symbolizing the four signatories to the Treaty: the Ottoman Empire, the Holy Roman Empire, Poland, and the Venetian Republic. Wiping his brow, the man I thereafter referred to as “The Peacekeeper” told us that, a few months before, the Turkish Ambassador had come to see the church, and asked to open the “Turkish door,” which was locked. Showing that disdain and peppery anger towards the former oppressor which all Balkan peoples possess, The Peacekeeper said, “I told him to go back to Turkey and find the key!”

The domed Baroque church was stuffy and sweltering in the midday heat, so we left earlier than we might have otherwise. We were expected in Belgrade that evening, and we were running late. Vilma drove; I was lost in thought.

Such a momentous historic event, one of the most important events in European and certainly Balkan history, was virtually hidden in plain sight in Sremski  Karlovci. I thought of the Civil War battlefield parks in the US, English Heritage Sites, or the conveyor belt tourism on offer at any number of global landmarks. Here was no Williamsburg, Gettysburg, or Hastings.

Vilma is, in every sense, a product of this Peace of Karlowitz. From the treaty onward, Serbs moved north into what was called the Military Frontier (which is now the Serbian province of Vojvodina), bolstering the Serbs and other South Slavs then living in situ. These Serbs were proud of their Byzantine Orthodox heritage, yet also served the Austrian Emperor loyally as faithful soldiers, merchants, and farmers for over two centuries. Vilma’s identity as a Vojvodina Serb, a product of both Serbia and the Hapsburgs, was forged at Karlovci/Karlowitz.

Only later did I realize that the Peace of Karlowitz impacted my own family’s history as well.

Farther south on the Balkan Peninsula, the Venetians, smarting from the loss of the island of Crete in 1669 (which they had held for a mere 400-odd years), managed to wrest the southern Peloponnese from the Turks as a result of their alliance with the Austrian coalition. This prompted the relocation of Venetians and Cretans from Crete to the Venetian-held Peloponnese, including some of my paternal grandfather’s ancestors.

As the fortunes of war ebbed and flowed for those at both the head and the foot of the Balkans, the Venetians lost their Peloponnesian fiefdom in 1715 to the Turks, and some of these Peloponnesians, among them one of my forebears, converted to Islam shortly thereafter.

My great great grandfather, a Peloponnesian of primarily Cretan but also possibly Venetian ancestry, with a Greek Muslim father, returned to the Orthodox fold after the success of the Greek Revolution. He too was a product of the Peace signed at the site of a small chapel overlooking the Danube.

The waves of history inevitably wash up on unsuspecting and often impossibly far-off shores. No wonder I felt such a deep intimacy with Serbia, its history, architecture, and varied inhabitants,  an identification independent of my love for my wife and for history in general. For the story of Karlowitz was, in part, my own story.