“The truth of these ‘Brothers Macedonian’ is that they were products of a unified culture, Byzantine Orthodox but not specifically or exclusively Greek or Slavic. Herein lies the not-so-secret complication of the Macedonian Question, about which the vociferously insecure protest too much on all sides of the conflict. No nation is hermetically sealed, and each of us embodies a genetic, cultural, and historical mosaic.”—Alexander Billinis 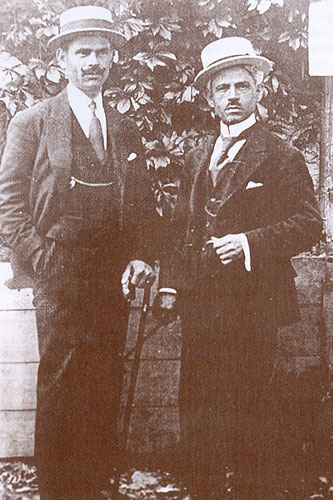 CLEMSON South Carolina—(Weekly Hubris)—March 2018—A centuries-old conflict in a region known for discord has returned, once again, to the headlines. The so-called Macedonian Question—in this case, most specifically, what name to assign to this former Yugoslav republic—is back in many of our news feeds. I have written extensively about this issue over the past two decades and, rather than add my own two drachmas on this matter here (I have said plenty elsewhere over the years) I would rather tell the story of two Macedonian brothers that might provide a common—and contrasting—history to the blacks and whites thrown around by advocates on all sides.

It is easy to harken back to a nostalgic past, which was usually not particularly idyllic. Allow me just a little bit of a rewind to set the scene. I will not, as most Greeks seem to prefer, return to the Age of Alexander the Great to score Hellenic (and Hellenistic) points for Macedonia’s Greekness. Instead, let’s focus on the late 1800s, when Macedonia (all of it) was a congeries of ill-governed Ottoman vilayets (provinces), with a volatile multi-ethnic and multi-religious population.

Under Ottoman rule for nearly half a millennium, Macedonia’s large Jewish population had been welcomed in from Spain in the 1500s. Islam was well-established in the region, represented by Turkish settlers and by locals of all ethnoreligious groups who had converted to Islam, most notably a large proportion of Macedonia’s Albanians. The majority population, Orthodox Christians, alternatively Greek-, various Slavic-, Albanian-, and Vlach-speaking residents, had been in situ from the Byzantine era, which preceded the Ottoman. These Orthodox Macedonians, subjects of the Byzantine Emperor, and the Serbian and Bulgarian Tsars for the entire Ottoman period, had been known by their overlords simply as Rums (Romans, Byzantines). They were, legally, and for all practical purposes, one people.

Certainly, these Orthodox Macedonians had varied customs, and geography, unlike language, did not play a role in divvying up one group from another. Nevertheless, many, if not most Macedonians of the time were bilingual, or multilingual, and illiterate. One village might speak more Greek and another one of the spectrum of South Slavic dialects, or Vlach (a series of dialects related to Romanian), yet there was enough cultural interchange that everyone spoke enough to understand everyone else. Further, as any speaker of several of these languages knows, the Balkan languages, despite their differences, comprised what is known as the “Balkan Sprachbund (language union)”, whereby the languages “bent” towards each other and their grammars enabled a word-for-word translation.

As a speaker of Greek, Serbian, and Bulgarian, I can attest to this interchangeability, even though the Greek language is considerably different from the latter two Slavic languages.

Regardless of mother tongue, all Macedonian Orthodox in the early 1800s went to church listening to the Greek liturgy and, to the degree that they had a national identity, it was as Rum, that is, ex-Byzantine subjects of the Turkish Sultan.

There were, of course, Macedonians who had emigrated to Central Europe, or to Russia, where they were exposed to the novel ideas of nationalism and revolution; then sought to bring these concepts home.

Orthodox Macedonians eagerly participated in the Greek War of Independence, though the Turks managed to suppress the revolution in the area. They were also involved in the armed struggles that birthed Serbia and Bulgaria, particularly the latter, but even though all three states sought to bring all or part of Macedonia under their control, the province, and its fruit salad (or Macédoine) of ethnic groups, remained under Turkish hegemony, to be liberated another day.

Into this milieu were born two brothers in the town of Avdela, in what is today the western part of Greek Macedonia. 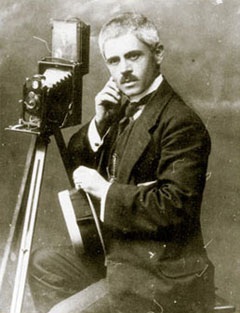 Yiannis “Yannakis” Manakis was born in 1878, and Miltos four years later. In 1902, the two moved to the town of Monastir (today’s Bitola in the Former Yugoslav Republic of Macedonia, hereinafter “FYROM” or “Slav Macedonia”).

Like many Macedonians, the Manakis brothers spoke Vlach as their mother tongue but grew up with Greek and Slavic dialects spoken all around them. Then as now, Monastir was an important town, with its human mosaic of Orthodox, Muslims, Armenians, and Jews.

The Manakis brothers were photographers and cinematographers; in fact, they were the first cinematographers in the Balkans, recording with an imported British camera the seminal events of their tumultuous era. Their first reel, of the Manakises’ grandmother spinning thread, is widely thought to be the oldest film strip in the Balkans and later became the subject of an acclaimed Greek film, “Ulysses’ Gaze”.

To the Manakis brothers, we owe the primitive moving pictures of the First Balkan War, when the Serbian Army, moving in from the north, threw down the hammer on the Turks just outside the city, and then linked up with the Greek Army mopping up from the South. When the guns fell silent, the brothers transitioned from being Rum subjects of the Sultan to subjects of the Kingdom of Serbia.

Quickly enough, another war broke out and, once again Macedonia, and the Manakis brothers were caught up in the maelstrom as Greeks and Serbs fought Bulgarians to retain their portions of Macedonia from Bulgarians who wanted more of the region. After four bloody years, the Manakis brothers continued documenting the era, now as subjects of the Kingdom of the Serbs, Croats, and Slovenes, soon enough to be known as Yugoslavia.

Just a couple of years later, a huge wave of refugees entered Greek Macedonia, about half a million Greek refugees from Turkey, often as not penniless and lacking a head of household; at the same time, about 300,000 Macedonian Muslims—Turkish-, Slavic-, and Greek-speaking—left for Turkey.

The mosaic of Macedonia on all sides of the intra-Macedonian border—Greek, Yugoslav, and Bulgarian—was plastered over by primary national colors. The Asia Minor Greek refugees remained nostalgic for their lost homelands, but also quickly became proud Greeks and Macedonians, determined never to be evicted again.

All through this time of upheaval, the Manakis brothers continued to take pictures and make films, chronicling the transformation of the Macedonian mosaic. They also won high accolades for their work, from the Ottoman Sultan to the Romanian and Yugoslav Kings, and even from Marshal Tito.

Before the start of the World War Two, Yannakis Manakis returned to Greece, working periodically as a photographer and cinematographer in Thessaloniki until his death in 1954.

Miltos remained active in Yugoslav cinematography, providing a vast archive of movies and prints for posterity. A Manakis Film Festival is celebrated annually in Slav Macedonia to honor the brothers’ legacy to Balkan (and Yugoslav/Slav Macedonian and Greek) filmography.

In the ideology of today, Yannakis is a Greek and Macedonia has been Greek since before the Age of Alexander the Great. Miltos, who died in Bitola in Slav Macedonia, is considered the “Father of Macedonian Cinematography.” Two brothers, from the same family, and not even linguistically Greek or Slav in their mother tongues, have suddenly become symbols of national division and ethnic mythology.

The truth of these “Brothers Macedonian” is that they were products of a unified culture, Byzantine Orthodox but not specifically or exclusively Greek or Slavic. Herein lies the not-so-secret complication of Macedonia, about which the vociferously insecure protest too much on all sides of the conflict. No nation is hermetically sealed, and each of us embodies a genetic, cultural, and historical mosaic.

In Macedonia, the story of the Manakis brothers is repeated thousands of times, and the descendants of other “Brothers Macedonian” may be protesting, under different banners, in places as varied as Skopje, Salonika, New York, Toronto, Dusseldorf, and Melbourne, not realizing, not remembering, that they are, not so far down the shared family tree, likely as not protesting against their own.

4 Responses to The Brothers Macedonian