The Chain of Events After the Dance

“As a kid, studying Haitian history made me proud to be born in a country that was such an example of our greatness as Black people. Haiti managed to defeat the French army, one of the most powerful and ruthless armies in history. Our victory was due to Dutty Boukman, a voodoo priest who helped lead the troops and figured out ways to best the French army, whose forces outnumbered them greatly.”—By Ricardo J. Josué 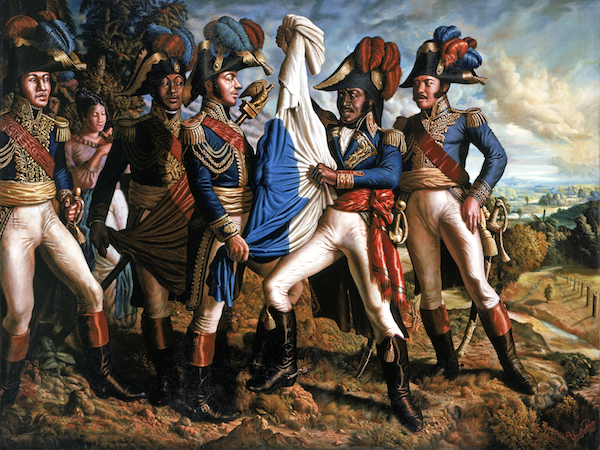 “Creation of the Haitian Flag,” by Ulrick Jean-Pierre.

BOSTON Massachusetts—(Weekly Hubris)—1 August 2020—As a kid, studying Haitian history made me proud to be born in a country that was such an example of our greatness as Black people. Haiti managed to defeat the French army, one of the most powerful and ruthless armies in history. Our victory was due to Dutty Boukman, a voodoo priest who helped lead the troops and figured out ways to best the French army, whose forces outnumbered them greatly. Boukman guided the Haitian soldiers spiritually and was a great leader. His aura made people respect him, and the opposing military feared him. All of those factors led to the defeat of the French army and Haiti’s eventual independence in 1804.

I would strongly encourage anyone who doesn’t know about Haitian history to do some research into it because we achieved arguably the most crucial milestone in modern Black History, giving other colonized countries the courage and, sometimes, military help to fight for their independence.

This piece is related to how we obtained our independence and how Haiti has progressed throughout time as a country. Other nations, especially France, were trying to prevent us from taking off and being the great nation that we were on pace to be. We had to pay a total of $21 Billion (in today’s dollars) to be recognized as a country. This payment and many other impediments, some self-inflicted, across time, have turned us into one of the world’s poorest countries.

I wrote this piece in the voice of an ancestor who was part of the 1791 Revolution. It describes him talking to Haitians about how we are in the present time and how embracing our roots will help us figure out the best way to make the country the best that it can be.

Another inspiration for this piece was a conversation I had with a friend who said Dutty Boukman cursed us as a nation, saying that it is why we’re where we are currently. I believe that we have lost our identity in all aspects and become more Americanized over time. Deeming our situation cursed greatly diminishes our ancestors’ contributions to our existence as an independent nation. I also remember telling my friend emphatically that his position expresses a form of self-hate. As Black people, I feel strongly about embracing our positive culture more instead of taking up certain aspects handed down and forced upon us by our oppressors. Embracing the authentic Haitian culture and making a conscious effort to grow internally in every aspect as a country will diminish systematic global oppression and help us become the best version of ourselves.

“Why do the rhythms of these drums scare you?”

Could it be that you were conditioned to hate yourself so much that even the ways of your ancestors are pushed aside?
Conditioned to even change your complexion in and out, changing your appearance to conform and look like them
Losing the pigment that gave you all the knowledge and strength to gain that same freedom
Could it be that you’re running from yourself, running from the same society that couldn’t even bear to understand or hear you?
The same society with no mercy, used you as mercenaries and the payment was absolutely nothing
You were just forced to conform without even realizing that along this same road that a part of you is slowly dying
And forgetting the symbols written in that very flag that we’re always flying (L’Union fait la force)
It’s time to Remember that You’re a product of the Haitian revolution, Dutty Boukman’s evolution
A Z-O-E, the first ones to ever do it and still had to pay the fee
Pain over cowhide percussions about the present-day repercussions
Perfect example of how freedom ain’t really free
A product that made them give you economic castration and constant adjustments to misery
Turning you against your own, using their same tactics
You keep falling for the same tricks, feeling sorry for yourself how free could you really be?
They’ll laugh and throw dust in your eye before you could see the real picture that was photoshopped to resemble their own image
They made you forget where your history started and where you really came from
They have you Ignoring your culture and blindly moving along
The healers get demonized to further the “agenda,” “manipulation,” or whatever label you desire
Positivity’s neglected, the negatives become as repetitive as those catchy songs
That same rhythm that gave birth to our nation, and that same night they had the cradle lit on fire which is ironically all smoked out
Ashes and ruins, the remnants are just beautiful painful reminders
You were set up for failure from the start, now ask yourself why do they fear you
So much that they go through lengths to suppress your influence on the world
Why do the rhythms of these drums scare you?
Maybe it’s the fear that if you tapped into your roots, all your greatness would finally unfurl
Don’t let them keep your spirits jailed,
You have to get up, get educated and relight the fire that died
Get up and motivate the others that don’t care to
It’s time to embrace them, don’t you let the rhythm of these drums scare you.

Born in Haiti, Ricardo Josué is a Miami- and Boston-raised human and part-time spoken word artist. He is a slightly introverted young old soul, on a constant search for knowledge. Josué is a lover of everything creative, but hip hop holds a very special place in his heart. His style of poetry is heavily influenced by the likes of Gil Scott Heron, Fela Kuti, and Lupe Fiasco. If he’s not somewhere boxing with writer’s block or working the regular 9 to 5, he may be found at his local gym working up a sweat; trying to reach his goal of being holistically healthy.
View all posts by Ricardo Josue →
This entry was posted in Uncategorized. Bookmark the permalink. Follow any comments here with the RSS feed for this post. Post a comment or leave a trackback: Trackback URL.

6 Responses to The Chain of Events After the Dance