Posted by Elizabeth Boleman-Herring on December 1, 2019 |

“Though Steadman and I—on those so very rare occasions when we meet—are more or less overcome, for the duration of our time together, and all but speechless, remembering our mutual losses, we also comprise, for one another, unique reservoirs of memory. At 68 and 85, respectively, Steadman and I have been actors in the family drama, coming onstage in different scenes, but supporting the same cast of characters, and then standing, together, beneath the lights, for much of the same tragedy and comedy.”—Elizabeth Boleman-Herring 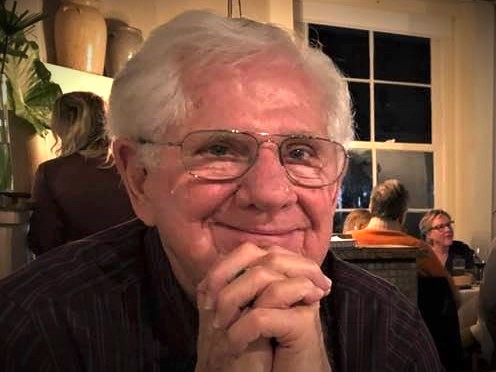 Author’s Note: This column first appeared in Weekly Hubris in January 2013. The author and her cousin Steadman most recently met, in November of 2019, for a too-brief visit in Pendleton, South Carolina.

PENDLETON South Carolina—(Weekly Hubris)—December 2019—Michael Mann’s 1992 film, “The Last of The Mohicans,” despite Daniel Day-Lewis’s performance as Hawkeye, is deeply flawed. It makes no difference, though: I cannot watch it, especially the last 15 minutes or so, when Chingachgook stands (outrageously, for James Fenimore Cooper fans) atop a mountain in the Great Blue Ridge, his only son, Uncas, having fallen in combat . . . because I, too, am the last living member of a very small tribe, now left upon the planet without grandparents, parents, siblings, or offspring.

The film was made in 1992, just after my mother (the next to the last of my Mohicans) succumbed to cancer.

Very much in Chingachgook’s moccasins, I am the last, now, of the Boleman-Herrings.

In mid-January of this year [2013], for the first time in decades, I managed to visit, in the flesh, for just one precious afternoon, a first cousin on my paternal side.

Steadman, a paleontologist and now-retired university provost, is the only living member of my rather vast Red-State clan of cousins with whom I have anything truly in common. I may share some DNA with other cousins, but Steadman and I are the only two to get past our Master’s degrees (Steadman being the only PhD in the family), give up any and all organized religion, travel the world, and embrace Liberalism with a capital L.

The second son of my late father’s only sister, Steadman too has now lost both parents, an older brother, Ron, and his wife, Shirley, though he, unlike me, has three half-siblings, and can look forward, ahead, and beyond through the eyes of his son, Danny, and Danny’s son and daughter, Daniel and Victoria.

Though Steadman and I—on those so very rare occasions when we meet—are more or less overcome, for the duration of our time together, and all but speechless, remembering our mutual losses, we also comprise, for one another, unique reservoirs of memory. At 68 and 85 [in 2019], respectively, Steadman and I have been actors in the family drama, coming onstage in different scenes, but supporting the same cast of characters, and then standing, together, beneath the lights, for much of the same tragedy and comedy.

We are still standing on stage, together, I find, in Act Three. (Leonard Cohen claimed that Tennessee Williams said, “Life would make a pretty good play, if it weren’t for that third act.”)

I believe Steadman and I would meet more often were it not just so painful to look into one another’s eyes. I remember, he remembers, beautiful faces, idiosyncratic turns of phrase (just the way my father pronounced the word “jaguar,” for example; or called Steadman and Ronnie “knuckleheads”), graceful, long-limbed gestures, and shared, echoing witticisms . . . that live on now in only two minds.

Whenever I visit Florida, I recall most vividly my father, who grew up on the then un-tamed coasts of that state, South Georgia, and South Carolina, back when “The Sunshine State” had a population of under 3 million.

I remember my father, the third-generation son of north-German immigrants, as he was when I was growing up, of course, between the years of 1951 and 1972; but I also “remember him” as Steadman knew him, in the years before his marriage and my birth; as well as when he was a young man (in that First Act, before either Steadman or I came onstage), through the oral history Steadman carries in his head. 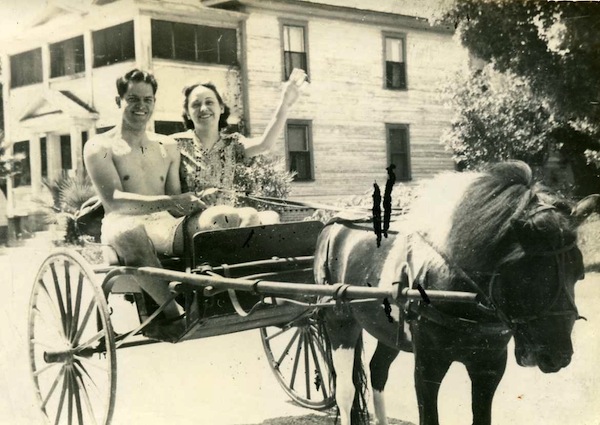 My father and mother, just before the war, in Florida.

My paternal grandfather, Frederick Henry Herring, was one of those hardy descendants of Germans—Prussians, really—who brought The Panama Canal into being, and then went on to run The Florida East Coast Railway.

Steadman knew our shared grandfather as “Nanny,” and tells me “Nanny was a store-keeper for the railway; one who kept and catalogued the various parts for the steam locomotives and rolling stock.”

He recalls: “I visited his office many times, and he would let me wander through the building where all the pieces of the steam locomotives were neatly arranged. It was like visiting a natural history museum where the disarticulated bones of the great dinosaurs were stored before being assembled into complete skeletons for public display. Perhaps that’s how I first became interested in paleontology.”

While in Panama, the skilled American workers—paid in gold, as opposed to silver, Steadman tells me—were also offered classes in photography and fine woodworking. My father’s father, obviously gifted in all right-brain skills, excelled in both fields, and almost every moment of his life after those days in Panama, where he hunted wild game and, famously, at night, shot two deer through their eyes with a single bullet, was documented in beautiful black and white photographs he shot, developed and printed, himself.

I took my own first slides with my grandfather’s last field camera, a 1949 Nikon brought back to “Nanny”—the man I knew, briefly, in toddlerhood, as “Dad”—from Korea.

When I visited Steadman earlier this month, in New Smyrna Beach, he shared with me an album of early photographs of my father, and the extended family, that I had never before seen. I have had some of Dad’s stills all my life, but Steadman has almost the entire family archive.

For me, sitting there on the sofa with my cousin, with Hilda’s brilliant second child, leafing through those family photographs was tantamount to viewing, for the first time, a Director’s Cut of my father’s early life, almost to the moment I entered it, and my grandfather exited it.

Due to the vicissitudes of Steadman’s own early life, and the tumult in my aunt’s first marriage, both Steadman and his brother Ron, as well as their much younger half-sister, Sandra, also spent time with my father and mother, as parents . . . before they became my parents.

In Steadman, a son of the true, forever lost now Florida, I see so very much of my father, Steadman’s “Uncle Bubba” (no one in the South can, it seems, pronounce the word “Brother” in infancy). And Steadman remembers my father as uncle, but also as I remember him, as “father.”

When we drive out together now to find a place that serves up peel-and-eat shrimp and hush puppies, Steadman casually drapes just his left hand over the steering wheel, at 11 o’clock, precisely as my father did, and tears well up in my throat.

How can I bring these basic, wordless emotions into speech for you; you, too, who have lost loved ones, who know what it is to have lights go out, all of a sudden, never to be re-lit?

Or, primary colors vanish from the palette, forever; everywhere?

My father was that. A primary color. Like orange. In Steadman, I see again a flash of bright orange, something I never thought to see again. 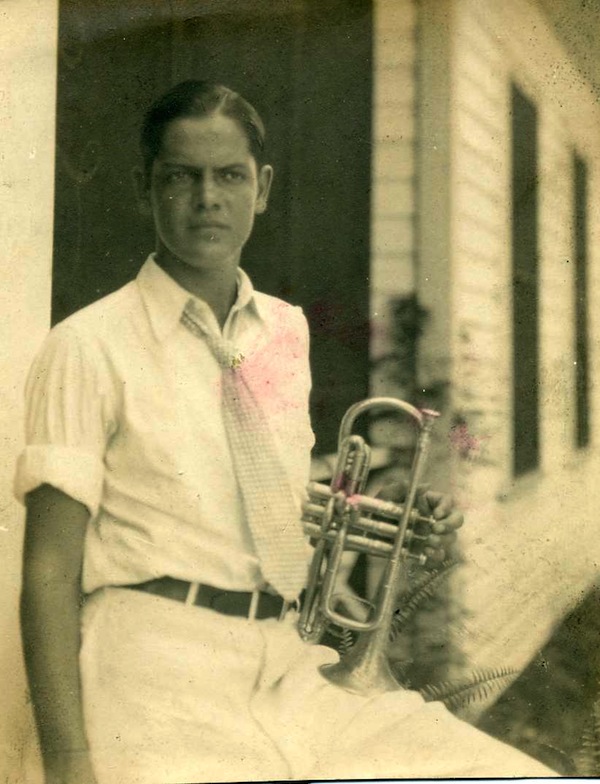 Frederick Jackson “Jack” Herring, as a young man in Florida.

When his granddaughter, Victoria (and children are thin, thin on the ground in this barren field of the family) displayed an early talent for the violin, Steadman thought about what to make for her.

Not what to buy for her, mind you. What to make.

Dusting off our grandfather’s fine woodworking skills, acquired in Panama, Steadman also called upon our shared ancestral talents as “artificers,” and set to work.

He went up to the Smithsonian Institution to study the works of Antonio Stradivari. He procured blueprints. He researched properly aged woods, and went to the Amish for a block from which to carve . . . his own Stradivarius. He studied glue. For a very long time, he studied glue. He approached fine violin-makers and procured specialized tools.

“Victoria started out playing a quarter-sized instrument,” my cousin told me. “I figured that, by the time she was ready, I’d have completed a full-sized violin.”

Two years later, in The Great Blue Ridge, where Steadman and his wife Shirley had bought a summer home, a master fiddler strung Steadman’s carefully made instrument, played it, and pronounced it a thing well-done. 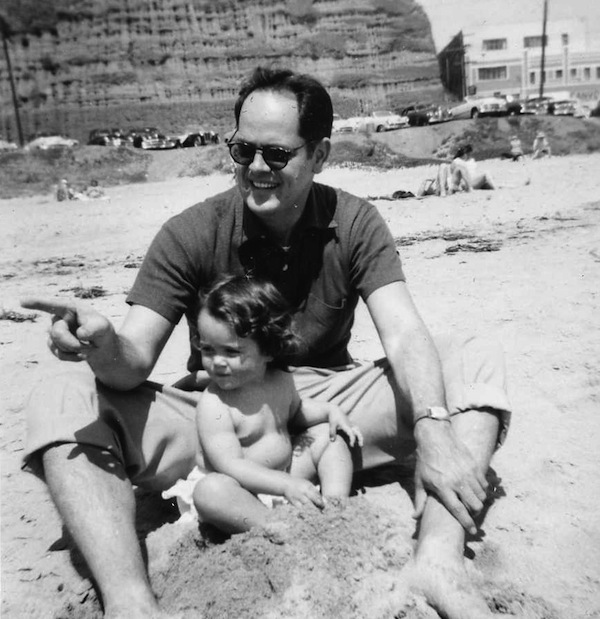 My father and I on the beach in California, early 1950s.

My father was one of the most physically beautiful men I have ever seen in my long life. He was a graceful athlete, a masterful teacher, a child-therapist brimming over with love and compassion, a husband and father who took Ashley Montagu’s teachings about “touch” to heart . . . and a major goofball. His face, in repose, was too beautiful to be true, but he was so seldom in repose: his wide smile and wild laugh resonate still in Steadman’s and my memory.

I have all around me here the gorgeous things he carved from wood; the photographs he took of Greece in the early 1960s, when he went to Athens as a Fulbright Scholar; the many tangible gifts he left my mother and me.

And, when I hug my first cousin Steadman good-bye, for one fleeting moment, I also have around me, once more, my father’s arms . . . and the bright color orange.

Note: In the 1970s, when my cousin Steadman’s PhD dissertation in paleontology was making its way to wider publication, he discovered, named and published two unique species of fauna in Florida: one, a flying squirrel; the other, a ground sloth. Both had been extinct for millions of years: there are no lasts yet living of their Mohicans.

3 Responses to The Color Orange & My First Cousin Steadman