The Devil, You Say! Musings on a Persistent Supernatural Character

“The devil, in fiction and drama, presents a subject worthy of close study, and that has indeed been the case with Dante’s Satan, Marlowe and Goethe’s Mephistopheles, Milton’s Satan, Mark Twain’s, Mysterious Stranger, and Golding’s Lord of the Flies, to list but a few of works in which Satanic figures appear in the canon.” John Idol

BURLINGTON North Carolina—(Weekly Hubris)—5/7/2012—So firm were they in their belief that the devil hid in dark corners, that the congregation of a small Baptist church between Boone and Blowing Rock, North Carolina, placed windows in all four corners of the sanctuary, an act that earned the church a photo in Ripley’s Believe It or Not.

The church has long since vanished, due to the widening of US 321 but, if recent polls are trustworthy, the congregation carried that firm belief in Satan to their new church.

A Gallop Poll dating from 2007 revealed that over 70 percent of Americans believed in the existence of the devil. Only in Northern Ireland does belief in Satan range so high, according to a 1991 poll.

I have no way of knowing how church members of that North Carolina Baptist church nor those persons responding to the 1991 poll pictured the devil but, most likely, they saw him as red in hue, with cranial horns, pointed tail, cloven hooves, and horrid facial features—just the way he’s often depicted in popular literature and pamphlets we try to avoid being handed at our front doors.

From the Middle Ages on, he’s been conceived as a vulgarized version of the Greek god Pan, as may be seen in many of the illustrations gathered in Robert Hughes’ Heaven and Hell in Western Art—a book well worth seeking out. For from simple woodcuts to grand sculptures and paintings, he’s been a powerful force in the imaginative life of artists (http://www.alibris.com/booksearch?qwork=2855022).

But he’s not just a hideously ugly demon, and for good reason. As head of the Archangels, Satan was one of God’s supreme creations, a fact that John Milton seized upon in depicting him. But hubris and disobedience proved his downfall. (Hubris, by the way, is a Greek term much beloved of my editor, Elizabeth, who—obviously—chose to name this publication “Weekly Hubris” for good reason.)

Such was also the case with Iblis, a rebel angel in Islam. The Koran account of the fall of Iblis is moralistically detailed. 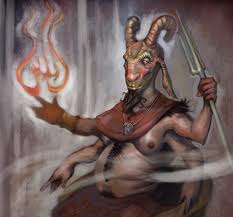 Iblis: as scary as his opposite, Judeo-Christian number, Satan.

When Allah created Iblis, he used smokeless fire, not clay. When he later created Adam and other humans, he ordered Iblis and others in his band to prostrate themselves before Adam, a command that Iblis argued against, to no avail. The fact that he had priority in the order of creation and comprised superior material (fire ranking above clay) did not sway Allah. Bow Iblis must or be cast out. His hubris would not be brooked by The Almighty. In Islamic art, he comes to resemble the devil.

Both Iblis and Satan begrudged the favored position of Man and set as goals for themselves leading mankind away from the paths of righteousness. If heaven were closed to them, it would not be open to humans if their wiles succeeded. Hence, they were tireless in their efforts to lead men and women to commit unpardonable sins.

An American short story illustrating how this might be accomplished is Nathaniel Hawthorne’s “Ethan Brand.”

Here, the titular character hubristically sets out to discover what no one has ever been able before to learn—what is the unpardonable sin? From his workaday job as a lime-burner, Brand devotes himself so wholly to his intellectual quest that he rises to stand with “star-light eminence” among the learned philosophers of his time. Along the way, he breaks the heart of a woman who pines away for him and comes, at last, to realize that, as her beloved’s intellect burgeoned, his heart withered, causing him to fall away from love and empathy, and his connection with the “magnetic chain of humanity.” His end, a fiery one, comes as he joins that fiend, the devil, with whom he had often conversed before beginning his quest.

Like Satan and Iblis, Ethan Brand suffers a devil’s fate, though his is self-selected. An interesting question is raised by his choice—is that final leap into the fiery furnace motivated by an act of contrition or by hubris? On the face of it, the leap seems to be the most rebellious human act of all, brought about by an unwillingness to admit that God’s mercy and love can indeed pardon the greatest of sins.

The devil, in fiction and drama, presents a subject worthy of close study, and that has indeed been the case with Dante’s Satan, Marlowe and Goethe’s Mephistopheles, Milton’s Satan, Mark Twain’s, Mysterious Stranger, and Golding’s Lord of the Flies, to list but a few of works in which Satanic figures appear in the canon.

Wherever he appears, the writers drawing upon his thought and delineating his conduct, seek, in their individual depictions of him, to explore the nature of evil and its impact on humanity. As tempter, in Marlowe, Goethe, and Milton, as tester, as in the “Book of Job,” as deceiver, in a host of works, the devil puts human characters on trial. We become witness to their struggles, failures, and hard-won victories.

Outside the Islamic and Judeo-Christian traditions of Satanic figures are many other evil powers, far too many to cover in this brief essay. Perhaps I can later examine the role of Mara in Buddhist culture or take flight into Star Wars and peer behind the cloak and helmet of Darth Vadar.

Just now, I wish to return to my roots in the Blue Ridge and relate a story about an image of Satan “graven” on my high school class ring.

A good many fellow students came to class sharing tales of how upset their parents were to see the devil’s face opposite that of the facade of Appalachian High School.

“Don’t you know we are expressly forbidden by the Bible to have graven images?” parents asked their high-schoolers. “Take that ring off and get your money back. You’re not going to wear that in this house!” Some parents went to the trouble of coming in to the principal’s office to complain.

The principal calmed them by explaining that, like Duke University, Appalachian High had chosen to call its athletic teams the Blue Devils and assuring them that no Satanic worship was afoot at the school.

“That’s merely the hideous face of their mascot. Nothing more.”

When the school combined with other high schools in the county, the devil was cast out, and the mascot for the new, enlarged school, Watauga, becoming a pioneer. I haven’t seen a recent class ring, but if it has a graven image, I’d guess it would look something like the face of Daniel Boone, topped by a coonskin cap.

Wherever found, however depicted, though, Satan seems not to enjoy a good press, except among Satan worshipers.

In the Baptist church I attended in childhood, he took it on the chin practically every Sunday, and he got hammered really hard during revivals. If the Mourners’ Bench* had been cleared of hardened sinners, the preacher proclaimed a victory over Satan. “Thank God,” he would shout, “the Devil’s been routed, praise be to Jesus. Now let us pray that these new lambs of God will tramp him underfoot when he tries to tempt them back into sin. He will surely try his best to lead them astray, for he is God’s eternal enemy.”

*Mourners’ Bench: A bench, seat, rail, pew, etc. set aside for mourners and repentant sinners that is usually found at the front of a revival meeting or southern evangelical church.