The Power of a Good Swear Word

“Ben is not even three and his brain will soon reset much of the information he has already learned. But impressions are being made. Confidence and life experiences are being formed. His personality is developing before my eyes and every time I place a truly nasty word in his vocabulary, I run the risk of it becoming an ingrained part of his dialect and him.”—Annie Carroll Maffeo 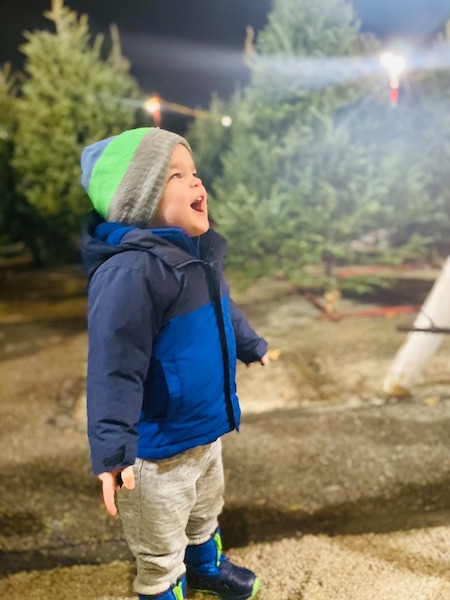 At this point, no one could extinguish this kind of joy.

BATAVIA Illinois—(Weekly Hubris)—January 2020—I love to swear. There. I said it.

I grew up with an incredibly smart mother and father who, despite their extensive vocabularies, never discounted the importance of a well-placed swear word. This is not to say that they walked around dropping F bombs regularly, but they appreciated a good Fuck yelled out at a stubbed toe or a dropped Bears pass.

When I was pregnant, my husband, a rather mild mannered curser, joked repeatedly that he was going to start a swear jar for me and we would fund our son’s college before he was three.

I just knew he was correct. That I would be the one to teach our son his first swear word at some comically young age and it would be a story for the ages in our family lore. But, 2.5 years in and I have found not only some very interesting alternatives to swear words, but an awareness of language in general that I had never really understood until I had a child.

We are very lucky that our son speaks all the time. He loves to talk. He loves to repeat everything and has recently taken up singing. By the way, he thinks its everyone’s birthday and will happily sing you happy birthday at the drop of a hat. Stop by if you’re having a bad day. This, however, makes me acutely aware of what I say and how I say it. What I have discovered is that I have developed a fear of words, none of which are part of a George Carlin skit.

The other day, my husband picked our son up from daycare and whispered to me that on the way home Ben had said he hated someone in school. We understood this was coming out of a two-year-old who has no idea what that meant, but it still threw us for such a loop. More so than if he had yelled shit at the top of his lungs. My brain began to pace. Had I said I hated someone? I didn’t think so. I am sure my husband had not, as he is far kinder and far more forgiving of humans than I am. I am sure this was simply a two-year-old hearing something somewhere and picking up on it as enticing and interesting and powerful.

What had not occurred to me before this was how much I had edited my speech. How careful I had become of what my son ingested in music, on TV, and through speech, even through the visuals on a magazine. If I am in the company of adults with a few glasses of wine I can swear enough that the sailors my father used to keep time with would blush. But in the company of my son I am painfully aware of how much he absorbs. Words I am careless with; stupid, hate, ugly, fat, dumb, sound like nails on a chalkboard coming out of his mouth.

That is the power of language. Something we undervalue as a society and tend to throw away (although you, Dear Reader, probably do not).

Ben is not even three and his brain will soon reset much of the information he has already learned. But impressions are being made. Confidence and life experiences are being formed. His personality is developing before my eyes and every time I place a truly nasty word in his vocabulary, I run the risk of it becoming an ingrained part of his dialect and him.

As his mother, I have to find a way to teach him the power of not only his physical actions (no hitting, kicking), but also the power of his words and how they impact the lives of those around him. In a world of quick-to-anger political leaders who have been given platforms to tweet whatever words come to mind, I have to give my son the ability to think about his words and what implications they have. How powerful they can be, whether written, spoken or sung.

Recently, Nancy Pelosi gave a very quick synopsis of why she does not hate our current president. Because hate is a very strong word. It carries with it so much. If you carry hate with you, that is a burden for not only the person you may “hate,” but also for yourself. It takes work to hate. And I want my son to stay light. I want him to carry with him happiness and joy. I want him to feel love deep in his soul. If I had my way, he would say the word fuck before he ever understood the word hate.

Annie Carroll Maffeo is many things while she is blow drying her hair in the morning and creating made-up scenarios but, once her hair is dry, she is a mother to a not-yet-two-year-old son and a wife to her husband Mike. Her university major, Political Science, enabled her to pursue her passion for politics (at heated family dinner discussions) but, as she chose to forgo law school, she eventually found her calling in the unusual world of trade shows. Now a director at a trade show association management company, Maffeo travels around the country for work and can tell anyone what city is the best fit for a specific event. After her son was born, Maffeo realized that she was suffering from a pretty overwhelming case of post-partum anxiety and started a blog blog as part of her therapy and to help bring awareness to the many issues women face while trying to balance this thing we call motherhood. (Author Photo: self-portrait; Banner Image: Mike Maffeo)
View all posts by Annie Maffeo →
This entry was posted in Uncategorized. Bookmark the permalink. Follow any comments here with the RSS feed for this post. Both comments and trackbacks are currently closed.

2 Responses to The Power of a Good Swear Word