The Tea Party: Better Than Nothing

“And then there is Obama, an African-American elected only because the country feared a Depression. If he is not re-elected, it will be because he failed to use the old-fashioned ‘liberal catechism’ to rally the country behind an early resolution of the housing crisis, which would in turn have muted the jobs crisis.” Sanford Rose 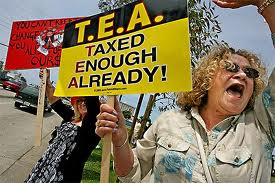 The Rabid Right: better than nothing?

KISSIMMEE Florida—(Weekly Hubris)—8/6/2012—As Thomas Frank, author of Pity the Billionaire: The Hard-Times Swindle and the Unlikely Comeback of the Right, puts it: The Tea Party “is preposterous. It is contemptible . . . . But you know what it’s better than? It’s better than nothing.”

Nothing is what the Obama Administration, one of the most heralded since the time of Roosevelt, has given us.

Called upon to provide a new direction, Obama has proven doggedly vectorless.

The country looked for a New Deal. It got scarcely a perfunctory shuffle.

The country sought a solution to the housing crisis. The crisis worsened.

The country asked for jobs. It got only a fraction of what were needed.

The country wanted relief from financial dominance. The big banks got bigger.

The country sought justice for financial malefactors. None of note has been touched.

Finding pallor and timidity on the so-called left side of political spectrum, the country gravitated to the decisiveness and vigor of the New Right.

It mattered little that the Right spoke gibberish. At least it spoke.

Kennedy benefited from the lackluster growth of the late 50s.

Reagan was swept in by the inflationary shock of the late 70s.

Clinton profited from even one of the mildest postwar recessions.

And then there is Obama, an African-American elected only because the country feared a Depression.

If he is not re-elected, it will be because he failed to use the old-fashioned “liberal catechism” to rally the country behind an early resolution of the housing crisis, which would in turn have muted the jobs crisis.

Then he would have been something; not the perceived nothing that inclines the country toward the meretricious mouthings of a rabid Right.