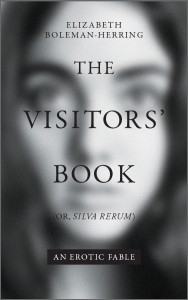 A Novel by Elizabeth Boleman-Herring

In July of 2021, sophisticated, well-heeled travelers from all over the world repair to The Mala, an exclusive  boutique-resort perched atop the vertiginous cliffs of Oïa/Imerovigli, Santorini. Here, in each of the resort’s six stunning, eccentric villas, visitors know they can count on the owner, the mysterious Kírkē, and her expert staff, to provide for their every creature comfort . . . as well as fulfill their long-unvoiced and secret desires. 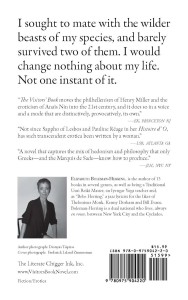 Visitors leave behind not only their hearts at The Mala; they also feel free to record the details of their unforgettable sojourns—in writing, line drawings, and song. For years, Kírkē, the Mala’s American owner (and namesake of the legendary sorceress who enchanted Odysseus), has encouraged her guests to reveal their thoughts, dreams, longings and souls in volume after volume of her villas’ “Visitors’ Books.” Jaded businessmen, naïve honeymooners, would-be suicides, earnest volcanologists (always with an unwilling teenage daughter in tow)—all come to The Mala, and depart, transformed. We also meet the inscrutable staff of the Cycladic resort: a trio of incredibly efficient, discreet, and achingly handsome Albanians—as well as Lars, a nonpareil masseur and artist, whose libido is as formidable as his more conventionally marketable skills. Most important, woven in like a silken weft and woof amongst the musings of her visitors, Kírkē writes her own story, describing an exotic odyssey filled with erotic escapades, bottomless yearning, and unbearable tragedy. Like travelers to The Mala, readers of The Visitors’ Book (or, Silva Rerum) will reach the book’s final page amused, aroused, and deeply altered.

Elizabeth Boleman-Herring is an internationally and prolifically published author of memoirs, travel books, poetry, jazz lyrics, coffee table picture books, children’s books for multicultural children; and thousands of columns, reviews and speculative essays. Foremost among her publications are Greek Unorthodox: Bande à Part & A Farewell To Ikaros; Vanishing Greece; Ruminant With A View; The Crowded Bed: Erotic, Light & Formal Verse (Intro. By Patrick Leigh Fermor); The Other Side of the Road; The First of Everso; and Insight Pocket Guides (to Athens & Environs; Atlanta; Corfu & Paxos; Aegean Islands: Mykonos & Santorini, Naxos & Paros). Boleman-Herring, a former professor of literature, journalism, and creative nonfiction, both at American and Greek universities, and founder, editor, and publisher of myriad journals, has also joined Arianna Huffington’s ranks as a columnist. 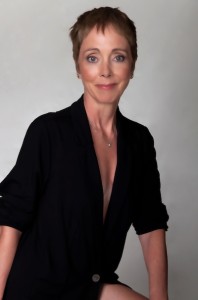 Elizabeth Boleman-Herring, Publishing-Editor of Weekly Hubris, and a columnist for The Huffington Post, considers herself an Outsider Artist (of Ink), a bargain-basement love-child of Lenny Bruce, Sylvia Plath and Erma Bombeck. Of especial note is her recent publication of The Visitors’ Book (or Silva Rerum): An Erotic Fable (purchase the novel below on this page at the Buy The Book heading). Her personal columns (written sans mask) make some readers squirm; her political columns, usually incendiary, make other readers squirm. (Boleman-Herring believes squirming is the 21st century’s antidote to sitting on the sofa watching “American Idol” and “Fixed News.”) Thirty years an academic, she has also worked steadily as a founding-editor of journals, magazines, and newspapers, and is the author of 15 books. Three other hats Boleman-Herring wears are those of a Traditional Usui Reiki Master, an Iyengar-Style Yoga teacher (who, through www.GreeceTraveler.com, leads trips to Greece) and, as “Bebe Herring,” a jazz lyricist for the likes of Thelonious Monk, Kenny Dorham, and Bill Evans. Boleman-Herring would also have you know she’s a dual national, a cook and housekeeper of surpassing mediocrity, a crack shot, one of South Carolina’s few card-carrying Liberal Bleeding Hearts . . . whose astrological sign is Eeyore, with Tigger rising. (Her memoir, Greek Unorthodox: Bande a Part & A Farewell To Ikaros, is available throughwww.GreeceInPrint.com)

Click to view the glossary: The Visitors Book Glossary.

The sample chapter is excerpted from “Kírkē’s Diary.”

To purchase the newest, third edition of the novel on Kindle (via Amazon.com) , click through to The Visitors’ Book/Kindle Version.

To order, signed, personalized, first-edition copies of the limited initial first printing (200 copies; 176 pages) of The Visitors’ Book, click the Add to Cart button to purchase using the security of PayPal. Note: there are very, very few copies of the second edition left in-house.

To order signed, personalized, second-edition copies of the limited second printing (150 copies, 208 pages, including Glossary) of The Visitors’ Book, click the Add to Cart button to purchase using the security of PayPal. Note: Sorry, the first edition is completely sold out.

Elizabeth Boleman-Herring would like to thank the following hoteliers, composers, artists, poets and presses for their generous support of her novel:

Painter and gallerist, Christoforos Asimis, of Phenomenon Gallery, Phira, Santorini, Greece, for the use of his original sketches of Santorini (http://www.greecetraveler.com/index.php?page=shopping)

Composer and big band leader, Cecilia Coleman (lyric by Bebe Herring), for the composition, “After & Before” (www.CeciliaColeman.com)

Poet, author and polymath, Willis Barnstone, for his translation of Ibycus’s poem from “The Greek Anthology” (http://www.willisbarnstone.com/WillisBarnstone.com__The_official_Willis_Barnstone.html)

5 Responses to The Visitors’ Book