“I’d been ferreting out recipes in the medieval inner town, founded by the Venetians in the 13th century and still full of atmosphere. Here, Latin emblems or Ottoman inscriptions crown massive wooden doors set in arched stone portals. Sometimes, they open onto flowering courtyards, where you half expect to see a hansom carriage instead of a pair of battered motorbikes or jumble of children’s toys. In one square, cafés encircle a Venetian fountain of spouting lions’ heads; others look onto mosques and minarets that haven’t heard a muezzin since 1922. And, of course, there are shops, some no bigger than a closet, where curious foods vie for attention with old-fashioned underwear and high-end bikini displays, hardware, and souvenirs.”—Diana Farr Louis 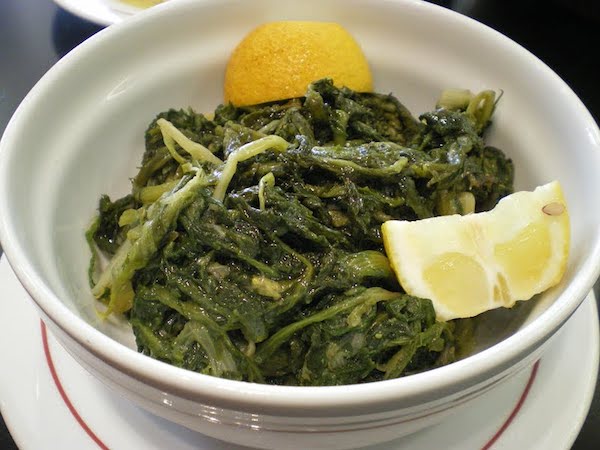 ANDROS Greece—(Weekly Hubris)—(First Published on August 1, 2011)—The other night, we were sitting in a taverna when one dish leapt out of the menu: Vlita sauced with tomato and garlic. Vlita, usually transliterated as Blite (or even Blight—though it is anything but), goes under the name Amaranth in English. But I have never eaten it outside Greece.

Until the past decade or so, it has been the only leafy green hardy enough to grow in our blistering summer heat. Everything else—spinach, lettuce, cabbage—either wilts or bolts, and so we resign ourselves to a steady diet of tomatoes, peppers, cukes, zukes, and eggplant, with an occasional helping of string beans, from June to October.

Vlita, though, satisfies the virtually insatiable Greek craving for greenery, cultivated and wild. When just picked and lightly cooked, its subtle, delicate flavor even makes it a candidate for the poor man’s asparagus title: neither bitter nor sharp like some winter greens; nor silky sweet like beet tops.

Plain, boiled, drenched in oil with lemon or vinegar, it’s a staple at almost every taverna. But I hadn’t seen it dressed up with tomatoes and garlic in over a decade, and had forgotten what a difference those small additions make.

Although perfectly happy in my balcony seat above the lights of Batsi—the island’s fishing port turned tourist center—seeing that dish on the menu took me back to Rethymnon, Crete, where I first tasted it.

I’d been ferreting out recipes in the medieval inner town, founded by the Venetians in the 13th century and still full of atmosphere. Here, Latin emblems or Ottoman inscriptions crown massive wooden doors set in arched stone portals. Sometimes, they open onto flowering courtyards, where you half expect to see a hansom carriage instead of a pair of battered motorbikes or jumble of children’s toys. In one square, cafés encircle a Venetian fountain of spouting lions’ heads; others look onto mosques and minarets that haven’t heard a muezzin since 1922. And, of course, there are shops, some no bigger than a closet, where curious foods vie for attention with old-fashioned underwear and high-end bikini displays, hardware, and souvenirs.

While the flesh-colored girdles and ZZZ-cup bras were worth a long stare, naturally the edibles captured my interest.

There were cheesemongers with a small selection of cylindrical spools of well-aged graviera, honey purveyors, and dozens of bakeries. Some hid behind pyramids of paximadia (rusks)—savory and brick-sized or spiced and bite-sized; others had perfected the liknari, a sweet cheese tart in the shape of an ancient oil lamp; and one window even held a whole menagerie of animals created out of bread dough. Down in her cellar, the baker showed me other works—crèches and zoos—for which she’d won prizes. Who knew there were competitions for bread sculptures?

Wandering on, I followed a couple of dowagers past the mosque/conservatory through a Renaissance doorway into a cavernous, dimly lit hall. There a man and a woman, dressed all in white from shoes to white skullcaps, were making phyllo (Greek “strudel” leaves) by hand. The dowagers bought a couple of packets of the pastry and left. I stood and gaped.

The couple were working on either side of a solid table that must have been about seven feet square. Improbably, they pulled and stretched and flapped the dough as casually and as vigorously as if it were a linen sheet being readied for the laundry line. When, in a few minutes, the elastic stuff matched the size of the table and was even thinner than the finest percale, they covered it with a damp burlap “blanket” and started on another until they had a tall stack of sheets. Eventually, the dough being finished, they sliced each sheet into pan-sized rectangles and wrapped them for sale, mostly to hotels and restaurants. One sheet produced a packet of 16 leaves.

The surreal scene must have been repeated for centuries all over Greece, Anatolia, and the Middle East, wherever cooks turn pastry as fragile as onion skin into a thousand and one kinds of layered pies, triangles, circles, cigars, sultans’ turbans, coils, and crescents . . . .  I felt as though I’d slipped back to pre-industrial Ottoman times. (Sadly, when I revisited Rethymnon last year, the phyllo fabricators had gone the way of the Dodo.)

That evening, I prowled the tiny port for a place to eat. Though charming and romantic—just fine for an ouzaki or a nightcap—its restaurants advertised their fare on billboards plastered with lurid photographs. Worse, hustlers stood outside, like spiders trying to entrap unsuspecting prey. “Good evening, Lady! Come please! Here best food in Rethymnon.”

I ran their gauntlet and escaped to the far end, where I came to the base of the Venetian fortress. Just beyond it, a few lights betrayed the existence of a taverna. Reassuringly ordinary, it had a Greek clientèle, a printed menu, and a welcoming owner. I sat down in relief, ordered a jug of white wine, and asked for the chef’s specialties. One was roast lamb finished off with a yogurt, egg, and honey sauce—which has not stayed in my memory—but the other was a sublime plate of vlita.

As I write this, I remember more and more about those days and nights in Rethymnon: the Ottoman prison-archaeological museum, the ceremonial breads exhibit, tales of the bordello that used to liven up the ruined castle, the cooking lessons with a sophisticated Grecotel chef who had cooked a gala dinner for Hillary Clinton, learning to make fish with okra in a seaside taverna, and stirring grape must into pudding with a woman named Kalliopi in the simplest of mountain eateries.

As long as I uttered the passwords, “DMK* sent me,” all doors opened to me, and everyone—without a single exception—let me into their homes, shops, and restaurants, and gave their secrets. Their favorite recipes, tips, and stories became mine.

And now, years later on Andros, they sometimes surface unexpectedly. That taverna above Batsi, called Aerides, if you happen to visit, might well awaken other memories. Its menu is gleaned from all over the Cyclades, as well as Crete, so I’m looking forward to reliving moments from Sifnos and Milos, Santorini, Naxos, and Folegandros . . . with bites that are far more tasty than that rather boring Madeleine of Proust’s. 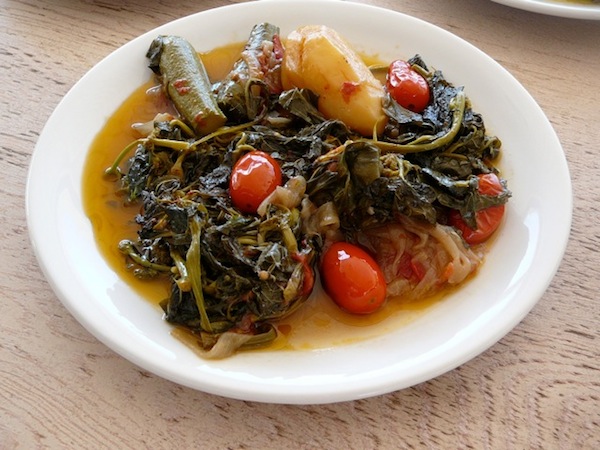 The vlita pictured here was enjoyed in another Cretan taverna by the sea at Akrotiri several years ago.

I can’t promise that this simple salad will stimulate anything beyond your taste buds, but it may be the starting point for a whole new set of memories. If amaranth cannot be found in your market, I suggest you substitute green leafy Swiss chard, which has a similarly mild taste, though its texture is smoother. (Residents of Astoria, Queens, New York City, may well find true vlita at their Greek green grocers’.)

Trim the greens of very thick stalks and any weather-beaten leaves. Bring a large pot of water to the boil and cook them for about 10 minutes or until they are tender but not mushy. Overcooking will ruin them. Drain well. In a separate pot, boil the zucchini and beans until al dente and drain. Place the vegetables in a bowl with the zucchini and beans surrounding the greens, add the tomato puree and crushed garlic, and dress with as much olive oil, vinegar, and seasonings as you like. Serves 4.

This is the deluxe version. The other night, I made it without the added veg. But do remember to mix the garlic properly. It has a tendency to clump together so that one person may get too much and the others not enough.

Also, if you do find vlita, don’t limit yourselves to this dish. It may be mixed with almost anything, from chicken and meat to assorted summer vegetables, and potatoes, as you see in the photo. Just add it when the other ingredients are almost ready.

*Author’s Note: This column is dedicated with gratitude and appreciation to Dimitris M. Kalaitzidakis, a connoisseur of good food with a special fondness for and intimate knowledge of the best his region can provide.

Diana Farr Louis was born in the Big Apple but has lived in the Big Olive (Athens, Greece) far longer than she ever lived in the US. She was a member of the first Radcliffe class to receive a degree (in English) from Harvard . . . and went to Greece right after graduation, where she lost her heart to the people and the landscape. She spent the next year in Paris, where she learned to eat and cook at Cordon Bleu and earned her first $15. for writing—a travel piece for The International Herald Tribune. Ever since, travel and food have been among her favorite occupations and preoccupations. She moved to Greece in 1972, found just the right man, and has since contributed to almost every English-language publication in Athens, particularly The Athens News. That ten-year collaboration resulted in two books, Athens and Beyond, 30 Day Trips and Weekends, and Travels in Northern Greece. Wearing her food hat, by no means a toque, she has written for Greek Gourmet Traveler, The Art of Eating, Sabor, Kathimerini’s Greece Is, and such websites as Elizabeth Boleman-Herring’s www.greecetraveler.com. A regular contributor to www.culinarybackstreets.com, she is the author of two cookbooks, Prospero’s Kitchen, Mediterranean Cooking of the Ionian Islands from Corfu to Kythera (with June Marinos), and Feasting and Fasting in Crete. Most recently she co-edited A Taste of Greece, a collection of recipes, memories, and photographs from well-known personalities united by their love of Greece, in aid of the anti-food waste charity, Boroume. Her latest book, co-authored with Alexia Amvrazi and Diane Shugart, is 111 Places in Athens that you shouldn’t miss. (See Louis’ amazon.com Author Page for links to her her titles.) (Author Photos: Petros Ladas. Author Head Shot Augment: René Laanen.)
View all posts by Diana Farr Louis →
This entry was posted in Uncategorized. Bookmark the permalink. Follow any comments here with the RSS feed for this post. Both comments and trackbacks are currently closed.