“On the day we left Andros in mid-October, I was convinced no olives would be clinging to the trees two weeks later. They were prematurely ripe, already littering the ground—wrinkled as raisins, hard as goat droppings—and the weather seemed to be mocking us. Thunderclouds rose and billowed to the southeast, lightning forked to the south and west, and I rushed to bring in the canvas chairs (no doubt causing the rain to stop). Only a few drops fell, just enough to furrow the dust on the car. Earlier, we’d had nights of heavy dew, far wetter than the drizzle, which created puddles on the marble table deep enough for a minnow to survive for an hour or two.”—Diana Farr Louis 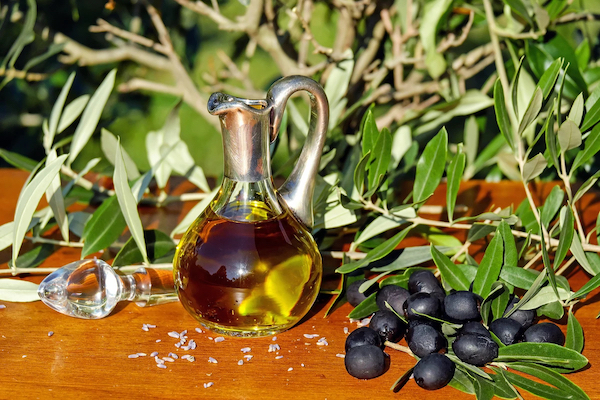 ANDROS Greece—(Weekly Hubris)—(First Published on November 12, 2012)—In Greek, there is a saying, a rather rude one, that seems to sum up where Joy-of-the- People (my husband) and I were last week: “O kosmos hanetai kai to mouni ktenizei,” which, somewhat loosely translated, might read, “With the world collapsing, she combed her puss.” A more genteel version might aim a little higher and call it “navel gazing.”

After a two-week break from island life, we returned to Andros on October 29th, just as the innocuously named Sandy was tearing north to wreak havoc on America’s East Coast and the Greek Parliament was wrangling over how much more to squeeze us pensioners. An Athenian reporter made headlines worldwide for releasing the so-called Lagarde List of 2,000-plus Greeks with Swiss bank accounts, which the previous Ministers of Finance had “forgotten” for two years in their desk drawers—the equivalent of saying “the dog ate my homework.” Mitt and Barry had just one week more of campaigning, the Syrians were still bombing each other, and our Golden Dawn fascistas were out bashing migrants.

But we were almost oblivious . . . preoccupied by a more immediate imperative: how to get our olives picked and to the press in just five days.

For anyone living in the “butter zone,” this enslavement to the olive must be difficult to understand. But those of us with our own trees feel a responsibility towards them. They put up with wind and drought, they need a minimum of care, and yet they keep producing their miracle fruit. It would be churlish not to relieve them of it, when they’re giving it to us for free. 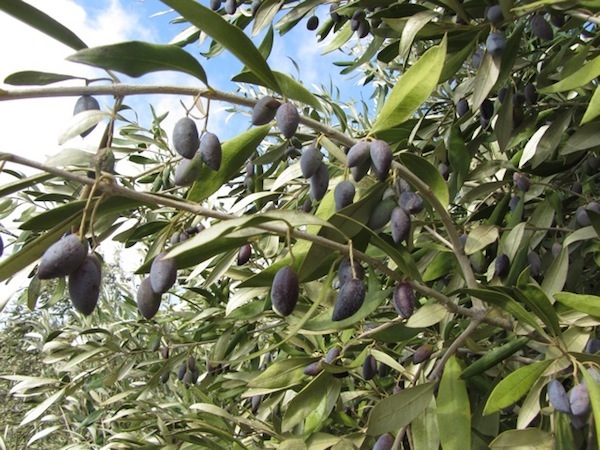 One of our lovely Kalamata olive trees, with its ebony fruit.

But oh, the anxiety this fall which, even as I write (on November 6th), has been too summery for peace of mind. The mercury last week was higher than in late August, and the much anticipated autumn rains have not materialized despite being heralded in every long-range forecast. Our corner of Andros has not had a decent deluge since May, and the land boasts a mere gauzy film of green, about as significant as the down on a 14-year-old’s cheek.

We would gladly receive an infusion of moisture from Britain, never mind New York.

On the day we left Andros in mid-October, I was convinced no olives would be clinging to the trees two weeks later. They were prematurely ripe, already littering the ground—wrinkled as raisins, hard as goat droppings—and the weather seemed to be mocking us. Thunderclouds rose and billowed to the southeast, lightning forked to the south and west, and I rushed to bring in the canvas chairs (no doubt causing the rain to stop). Only a few drops fell, just enough to furrow the dust on the car.

Earlier, we’d had nights of heavy dew, far wetter than the drizzle, which created puddles on the marble table deep enough for a minnow to survive for an hour or two.

I’d already picked some olives for eating, velvety Kalamata “tears,” round Amphissa balls, smaller than usual but free of the dreaded olive fly or dakos. Ironic, I thought, more olives than ever before; far healthier than usual, and we can’t pick them because the press doesn’t open until St Demetrios’s day on October 26th. Old Dimos Mamaïs (who I’ve discovered is three years younger than I!) said there’d be no point in pressing them before then; they needed some rain to plump them up.

And so, with heavy heart, I forsook my laden trees, and read with dismay on Facebook a few days later that it was “raining olives as well as water” on Andros.

But when we returned, the trees were still heavy with ebony pendants and the weather was benign. Reading through last year’s story, I saw that we’d had to fight cold and wind to get the crop in back then, assisted by friends lured with a bibulous lunch. This year, we sweated and worked alone, though the dawg supervised closely, so closely that she was occasionally pelted by a flurry of falling olives.

Picking olives is no easy task. We use a hand rake that looks like a child’s beach toy, but it’s like combing matted hair when the leaves and branches are as tangled and dense as ours. I’ve read somewhere that after the harvest you must cut back the inner branches so that a bird can fly through them, and ruthlessly chop those that aim straight at the sky. Every winter, I follow these orders and the trees repay me by thrusting out new shoots to replace them. There were times I felt as though I was hacking my way through the Amazon. 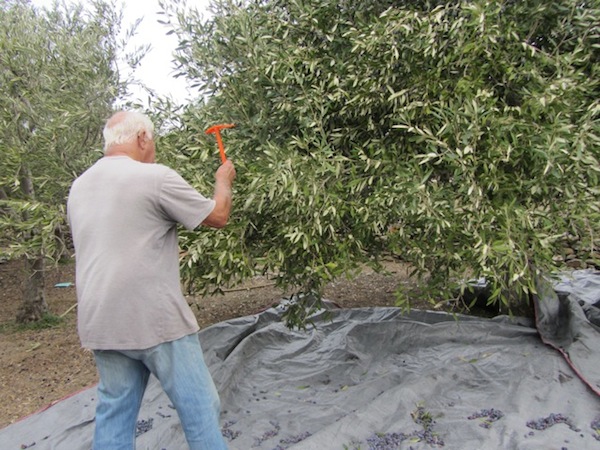 Though it’s true that olives appear on new growth, some of our trees that saw no pruning last year were just as bountiful this year. But they too resisted the rake. In a way, it was like war, but I kept apologizing for our brutality and thanking them, praising them for their beauty and abundance.

At the end of four days, we’d collected and bagged about 120 kg and, on Saturday morning, bright and early, hoping to be first in line, we delivered them to the oil press . . . which indeed was empty because they start work at 5 p.m. We stashed our hoard in a corner and went to town for a celebratory ouzo.

Mistake. Socializing has its risks. We learned of the next round of strikes, which included seamen and, worse, that the patronne of Gavrio’s prettiest café, our deputy mayor, and reference point for both locals and foreigners, had died suddenly at 62.

Katerina Tzouannou will be missed by so many—the poor she took food to and helped in unseen ways, the better off who gathered at En Gavrio day and night, and the cats who knew they could count on her for a saucer of milk. She had intelligence and style, loved fresh flowers and good music and, even at 40, when I met her, had the dignity that usually comes with age. She leaves a huge gap.

Shaken and subdued, we went home for a nap and returned to the oil press at the appointed time . . . only to find that our place in line had not been respected. But the atmosphere, busy and noisy as the engine room of a steamer, left no room for sorrow. We made loud small talk with two builders from Thrace, an old British friend, and the owners, and took time out to check the progress of our olives from bags to washer to crusher. We watched as two men spread round mats with the thick paste and piled them onto the press as though they were flapjacks. And finally, after hanging about for two hours, we saw our own gleaming oil start trickling into the stainless steel vat. 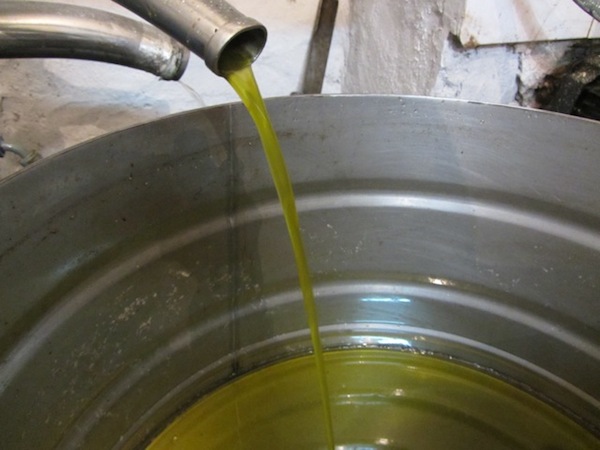 Our very own oil, a reward that lasts all winter.

Can there be anything quite so satisfying? This year, we only got 18 liters, a ratio of about 1:6, as compared to last year’s 1:4, but it will last the winter. And as I slather it on my bread, pour it over our salads, and drizzle it onto just about everything, I’ll remember that week in Andros, with its joys and sorrows.

There are worse things than to be a picker of olives.

In Greece, there are dishes called laderá, sometimes badly translated as “oily,” which are typically vegetables of any kind sautéed with plenty of lovely olive oil. I find them delectable; the oil brings out the taste of the veg and is fabulous for mopping up with good bread. Almost any veg or combination may be used in this recipe from Corfu, taken from my Ionian cookbook, Prospero’s Kitchen. Although on the mainland, láchano means cabbage, on Corfu it is simply a generic term for vegetable. The Corfiot word for cabbage is krabí.

Heat the olive oil in a large saucepan and sauté all the vegetables until they are well wilted. Add the tomato paste and about ½ cup (120 ml) water and simmer until all the vegetables are tender and most of the liquid has evaporated, leaving the luscious seasoned oil. Season to taste. Serves 6.