“Drew Faust, the distinguished American historian, recently alluded to the paradox that it is the very unintelligibility of war that fuels historians’ interminable attempts to explore it. But is war so unintelligible? Stupid it may be, but perhaps not inexplicable.” Sanford Rose 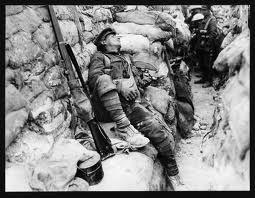 Solider asleep in the trenches, WW I.

KISSIMMEE Florida—(Weekly Hubris)—5/27/2013—Drew Faust, the distinguished American historian, recently alluded to the paradox that it is the very unintelligibility of war that fuels historians’ interminable attempts to explore it.

But is war so unintelligible? Stupid it may be, but perhaps not inexplicable.

Certainly the line separating the human from the inhuman is relatively fuzzy, and many cynical theorists argue that what we view as the essence of humaneness—social interaction—is merely a fig leaf to disguise the need to create alliances with which to attack other social groupings.

Man, in this view, is no better than the chimpanzee, though perhaps a bit more manipulative.

Man may be inherently bellicose, but I am partial to the notion that what triggers this bellicosity are threats to exaggerated feelings of self-esteem.

These feelings can be either individual or collective.

Sometimes, the individual merges with the collective. Thus, George Bush was motivated to go to war in Iraq to prove to his father and the country that he was not an ineffectual lightweight. His ability to take the country into that war, however, depended to no small extent on the view of many Americans that the Muslim world contemptuously scorned America’s undoubted values and achievements.

This interplay of individual and national bruised egos is strikingly evident in the run-up to World War I, the conflict that I have been studying intensively for the last three months.

Count Berchtold, the hugely wealthy and influential Austrian foreign minister, had been accused ever since the First Balkan War of 1912 of indecision and want of manliness. He therefore resolved to use the occasion of the assassination of the Austrian heir to the throne in 1914 by a Serb to silence his critics. In the cultural conflict between Germandom and Slavdom, Berchtold was determined to champion his “volk,” even if that meant plunging the world into war.

On the Slav side was Sergei Sazonov, the Russian foreign minister. He too was taxed with ineffectualness and lack of firmness in defending the interest of Russia’s southern Slavic brethren, the Serbs. Though Sazonov had no affection for the Serbs, he used their plight to resurrect his image with his sovereign, the tsar, and the status-hungry Russian people.

To be sure, in both the Iraq War and in World War I, there were so-called objective causes. America had indeed been attacked on 9/11, though not of course by Iraqis. Serbia was a threat to Austro-Hungarian survival, though not as much a threat as the monarchy’s own discrimination against all but two of its eleven constituent nationalities. Russia’s grain exports could have been cut off by an Austrian ally, Turkey, which was poised to receive several British-made dreadnoughts, but this danger was substantially overblown.

Those who argue that man creates alliances to give effect to his bellicosity may have it wrong.

Bellicosity may be the consequence of these alliances rather than their cause.

Alliances, social or political, may create unreasonably stringent standards of behavior. When individuals and states find that they cannot meet these standards, they often respond with violence.

2 Responses to The War Drive