“What a great-looking group! So many beautiful women . . . a few maybe not so beautiful, but generally a good-looking crowd. Good evening. Thank you for asking . . . me to attend this, the first . . . annual #MeToo convention. Now, more than ever before, women are speaking up about what they consider sexual assaults . . . and it’s costing me a fortune!”—Ross Konikoff 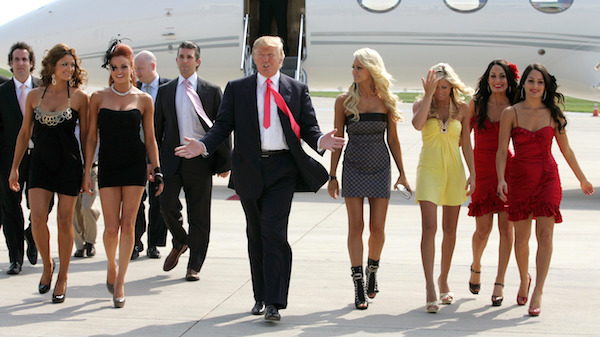 MANHATTAN New York—(Weekly Hubris)—December 2018—The Scene: Trump mingles with the multi-national crowd of women in attendance, making small talk and being himself at his most charming.

Kellyanne Conway: “Mr. President, this is Paula Yaacoubian. She’s running for a seat in the Lebanese parliament.”

Trump: “Hello, Paula. What country are you from?”

Trump: “Paula, it’s alright. We have many queers in my country. I love the queers. Many of them are great people so, if you don’t like men, that’s OK.”

Trump: “Honestly, I can’t keep track of you people.”

Conway: (quickly jumps between them) “Enjoy the conference, Paula.” (Paula stands, speechless, as Kellyanne tugs on Trump’s sleeve, leading him away.)

Conway: “Mr. President, you should say hello to the Ugandan Ambassador to India. I’d like her to meet you.” (Conway hustles Trump away.)

Trump: “Isn’t Uganda one of those shithole countries?”

Conway: “Yes, it is, Mr. President. I can see you’ve been doing your homework! Her name is Grace Akello.”

Trump: “That fat one over there?”

Conway: “That’s the one.” (He walks up behind Ms. Akello, putting his hands over her eyes from behind)

Trump: “Don’t tell me: Grace, is that you?” (She pulls his hands away and turns around, ready to kill.)

Grace: (Tears his hand off her hip) “TAKE YOUR DIRTY PAWS… . . . (Calms herself) Now, now, behave yourself, Mr. President. You and I met at a dinner party at the Indian Embassy. We discussed your lovely daughter Ivanka, and her work for women’s advancement in the workplace.”

Conway: (interrupting) MR. PRESIDENT, time for your speech! (Hustling him away from Ms. Akello) Let’s get you up on stage.” (She leads him up the stairs and off to the side as the Chairwoman announces him. He walks to the microphone to a light smattering of applause, smirking at the women in the audience, most of whom are glaring back at him.)

Trump: “What a great-looking group! So many beautiful women . . . a few maybe not so beautiful, but generally a good-looking crowd. (A collective gasp reverberates through the hall. Trump looks at his teleprompter and begins reading, haltingly.) Good evening. Thank you for asking . . . me to attend this, the first . . . annual #MeToo convention. Now, more than ever before, women are speaking up about what they consider sexual assaults . . . and it’s costing me a fortune! (He waits for a laugh, but his remark is met with dead silence, followed by murmurs of disbelief. He looks over at Kellyanne and shrugs. She smiles and waves for him to go on. He looks back to his teleprompter.) I didn’t expect that reaction, but OK. The #MeToo movement . . .has been active for over . . . a decade, thanks to the inspired and dedicated work of . . .Tar . . . ana Burke . . . an activist and advocate for young women of color. Where are you, Tarana? Are you out there tonight? Where is she? I guess she was too busy to make it tonight. I think I saw her at the hotel bar last night. She probably overslept. (The murmur from the crowd grows louder and more sustained. Trump goes back to the teleprompter) This movement is far more . . . ambitious in scope and . . . scale and it extends beyond one political actor or even one political party. By the way, Harvey Weinstein is a good friend of mine and I wish you gals would lay off him. (back to script) We’re all human beings and . . . have a right to say, ‘This is how I want to be spoken to. I don’t . . . want to be spoken to, as though you own me, as though you think you can touch me when I say you cannot . . .  (stops reading and looks out at the crowd.) Ladies, it’s just not going to happen. Men are men and when we spot a piece of ass we’re going for it. (A few remarks, yelled from the audience begin punctuating the steadily growing murmur as there is now a growing sense of danger in the dark auditorium.)

Trump: “But by and large, as an organization . . .hey . . . that’s funny. Bi and large describes a lot of you plus-size gals out there in the audience tonight!”

Suddenly, a bottle whizzes just past his head, thrown from the audience. Trump, at first startled, now goes white with fear. Then, another bottle comes at him, missing him by inches, knocking over one of his teleprompter stands, as he ducks down behind the podium. Kellyanne screams for security but many of the guards are women and they merely stand in place, watching the escalating attack. Kellyanne begins frantically punching numbers into her phone until it’s grabbed from her hand. Another woman socks her solidly in the jaw and watches as she crumples to the floor like an empty burlap sack. The Secret Service men find themselves suddenly surrounded by large groups of women, preventing them from running to the stage. They draw their firearms and hold them out, spinning in place threateningly, but the women will not move away. Soon, dozens of bottles, glasses, books, and assorted fruit are launched toward the podium as Trump cowers behind it, trembling and whimpering for help. Seven women from the Pro Wrestling Women’s Alliance walk out onstage, pick him up by the arms and legs, and carry him offstage as he flails and struggles to get away, screaming pathetically for help. Thousands of women begin cheering as the president disappears through the curtains. The women release the Secret Service detail to run up on stage, chasing after the wrestlers, but they and the president have been whisked away after piling into a waiting limo, being transported to parts unknown. The crowd begins to disperse, filing calmly from the theater, many hugging each other, while tears of joy stream down their faces.)

The next morning, as the sun rises, Don Trump finds himself standing on the port side deck of a large private yacht, registered to one Laurene Powell Jobs. Dressed in a fresh white terrycloth robe, he stares out at the vast Pacific Ocean, long strands of his grey hair hanging down from both sides of his head, moving slowly in the warm breeze. A pretty, young ship steward wearing a very revealing bikini approaches, holding out a tray of with coffee, croissants, and a bowl of fresh fruit.

The President’s beady eyes roam her perfect body as he waves away the food. Then he snaps out of it.

“Never mind all that. You really should eat something. You have a busy day today,” she says, smiling.

“What does that mean?” he asks.

Claire pulls out her clipboard and begins dictating his schedule.

“In one hour, at 7:00 a.m., you’re to be in the exercise room for 15 minutes on the treadmill, and then 30 more minutes of weight training. We need to knock 75 pounds off you. After your shower, a breakfast consisting of grapefruit, scrambled eggs and coffee will be served in the dining room. At 10 o’clock, you have Etiquette class, followed at noon by two hours of American History. A light lunch will then be served. At 3, you have English Literature, followed by 90 minutes of Economics. You are then free to roam the ship for an hour before dinner, following which you have a two-hour Humanities lecture, and then right off to bed. This will be your schedule for the foreseeable future, six days a week, with one day off to do as you please. There will be no television, no cellular service, and no Internet . . . oh, and you’re getting a roommate, starting tonight, for the remainder of your captivity.”

“A roommate? In that tiny cabin? There’s only one bed! Where’s he going to sleep?” he asked.

“Is it you?” asks Trump, looking up and down her luscious body.

“Melania? Ha! That’s a laugh! Did you kidnap her, too? She wouldn’t go for that in a million years! She hates my guts. There is nothing you could say that would convince her to stay with me in that small room, much less sleep with me in that bed! We’d kill each other the first night!” says Trump, now getting nervous.

“Oh, no? As a matter of fact, this entire mission was her idea. She called us a month ago and arranged for a discreet meeting where she explained that when she married you she thought she was getting a real man, not the vulgar, petulant two-bit Julius Caesar you turned out to be, and that you have a maturing son who needs a good father, a decent role model, and she was damned if she would just stand by, letting him grow up to be like you. In other words, Don, we’re going to make a man out of you so you can make a man out of Barron. And, by the way, if it makes any difference, she says she still loves you.”

Trump is stunned, and stands, slack jawed for a moment. He reaches over, picks up a croissant and takes a large bite.

“No kidding? She said that?” says Trump, spitting bits of food while flakes of the croissant cling to his lips and cheeks.

“How about you? Could you love me?” he asks, turning toward her and allowing his robe to open, exposing himself to her.

She laughs out loud, shaking her head in disbelief.

“How long do you plan on keeping me here?” he asks.

“Don, I have a feeling we’re going to be on this boat for a long, long time.”

8 Responses to Trump Speaks at The International #MeToo Convention