“I believe it means Western capitalists. I learned it from my friend Aaron, a fighter from a land called Haifa. He blew himself up for the Taliban, although it was not intentional. He was vaping in the supply room when a spark caused the Clorox fumes to ignite a pile of missiles, but we were assured he still gets his 70 virgins, 70 wives, AND that their veils will be sparkling clean and white.”—Ross Konikoff 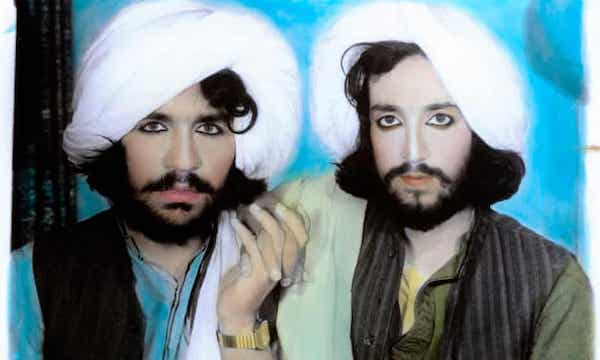 A photo Thomas Dworzak came across in the backroom of a studio and offered to buy. (Photograph: Collection T Dworzak/Magnum.)

Asad: Blessings to you.

Saad: And to you. I am Saad, which means happiness. I bring happiness.

Saad: Promises, promises. Are you staying in Kabul or will you be fleeing?

Asad: I’m here all week. My people will rule Afghanistan now that we have conquered the American hazarai.

Saad: Hazarai? What is that word?

Asad. I believe it means Western capitalists. I learned it from my friend Aaron, a fighter from a land called Haifa. He blew himself up for the Taliban, although it was not intentional. He was vaping in the supply room when a spark caused the Clorox fumes to ignite a pile of missiles, but we were assured he still gets his 70 virgins, 70 wives, AND that their veils will be sparkling clean and white.

Saad: I am not certain that’s true, since you and your habibs are so liberal. Our Isis is much stricter than you Taliban sandflakes.

Asad: Are you being ironic with me? We’re very much less tolerant than you camel jockeys.

Saad: What you say is a large quantity of dromedary droppings. We don’t allow women to work.

Asad: Oh yeah, well we don’t let them go to school or get an education.

Saad: Well . . . we make them cover their faces in public.

Asad: We don’t allow them to shower.

Saad: We allow them one per year, fully garbed, and only with cold water.

Asad: We make them wear two pairs of underpants.

Saad: We don’t allow them to take off their clothes ever, for their whole life.

Asad: If they speak without permission, they must suffer ten lashes.

Saad: We don’t allow them to eat with men in the room.

Asad: We ban them from eating altogether.

Saad: We’re in discussions regarding yawning restrictions and blinking limitations.

Saad: So, what do you like to do, come a sunset Thursday into a holy Friday?

Asad: I like art, with an eye toward Mughal miniatures, so I try to see as many as I can before we blow up each museum. And you?

Saad: I prefer paintings of Muhammad, but most have been shown wearing a veil hiding his face. Many earlier miniatures were overpainted to use this convention so there aren’t a lot up on walls lately.

Asad: How about sports? Do you have a preference?

Saad: I like boxing, but our bodies are gifts from Allah so it’s not lawful. Muslims should not hit each other in the face. We go straight for the genitals, which serve no purpose other than the pleasure of rape. Muslims must be careful that our exercise does not lead us to what is impermissible.

Asad: Yes, that impermissible thing is troubling. Like that teenage soccer player being hung from a crane in Iran last week, or those men being stoned to death around the corner yesterday for playing a round of the Junior Quran Challenge Game.

Saad: Sharia law says that if you have sex with someone of the same gender, you’ll go blind.

Asad: Can we just do it until we need lashes?

Saad: I’m hoping my fellow Issy-boys will ignore that mishegas.

Asad: Such a word! What is this word, mishegas?

Saad: I learned it from a boy named Aleph, who fought with us. He came from a distant land called Borough Park, Brooklyn, somewhere in the United States. He said it means insanity, silliness, and craziness. Hey, what the hell, what happens in Kabul, stays in Kabul!

Asad:  I’m verklempt over your level of tolerance for our desires. I want to kiss you on the lips and then hurt you severely.

Saad: But that is love. Man upon man love is the only pure love. And then afterward I want to kill you.

Asad: Do you really mean it?

Saad: Yes. I’ll light your fuse and you mine. Let’s blow ourselves up, killing as many women and children as we can.

Saad: What can I say? When it’s right, it’s right!

Saad: This is the end of a beautiful friendship!

Asad: It ended a moment ago!

Note regarding the illustration for this column: For more about Thomas Dworzak’s serendipitous find of photos of Afghan warriors in make-up, read: “Thomas Dworzak’s Taliban Glamour Shots.”