Wild Thing, I Think I Love You

“I am able, remarkably, to celebrate both the unmatched offerings of nature on its own terms as well as the joys and challenges of trying to make a garden. The close presence of nature, however, does make some aspects of gardening more challenging than I would like; the reality of caring for the garden (however ineffectually) constantly affronts my affection for the natural world surrounding it.”—William A. Balk, Jr. 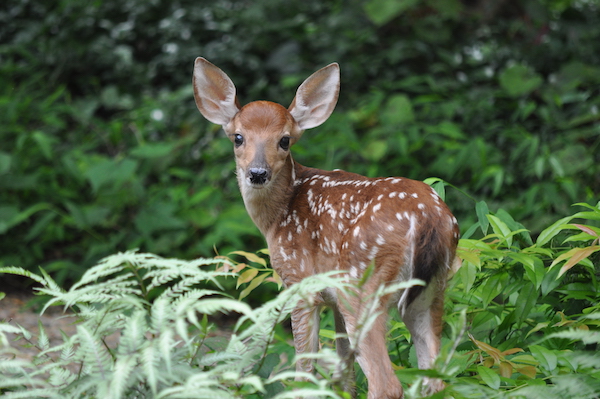 Deer in the garden.

ELKO South Carolina—(Weekly Hubris)—May 2018—I am able, remarkably, to celebrate both the unmatched offerings of nature on its own terms as well as the joys and challenges of trying to make a garden. The close presence of nature, however, does make some aspects of gardening more challenging than I would like; the reality of caring for the garden (however ineffectually) constantly affronts my affection for the natural world surrounding it.

Take the deer— please!  Whereas I often find their tracks close by in both the garden on the creek and at the farmstead, usually I don’t find their damage too significant. Most years, they confine themselves to nibbling one or two plants which appeared along their path that day. Usually, the plants recover fairly quickly and return to good health. Even if I lose a few plants one year, I usually figure there are plenty more left untouched, and there is excellent fodder out in the woods adjacent to the gardens to attract the deer before they get to the garden. So, in general, we all sort of live by an unspoken agreement not to do any major harm to each other.

One year, though, I foolishly placed a couple of potted hydrangeas by the driveway, which runs through the woods at the property on the creek. These were my beloved “Ayesha” hydrangeas, grown large and handsome and just coming into bloom. There were some smaller hydrangeas, also in pots, placed nearby—General Foch, Painter’s Palette, and Lady In Red—which had just started to form their bloom-heads, too. 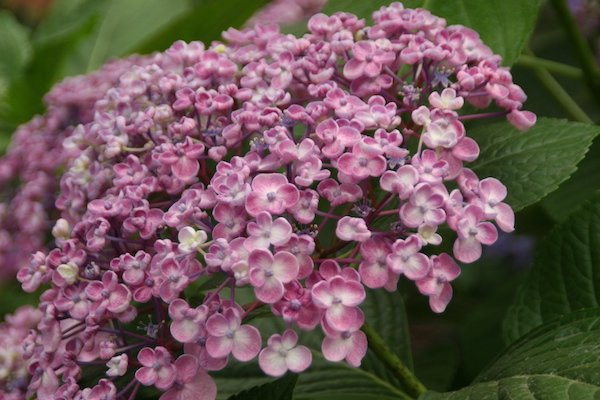 The first to be attacked were the large “Ayeshas”; the deer simply sheered off the ends of every flowering stem about two feet down. I’m sure they were delicious. I knew, of course, that the plants themselves had not been harmed; in fact, they’d grow back even bushier and fuller. But I deeply regretted having to miss all those gorgeous blooms that particular year, the lilac-like flower heads that make “Ayesha” so unique among her mop-head cohort.

Within the week, the others had similarly been gnawed down to stubs. As they are smaller plants by nature, the loss of substantial new growth on these less vigorous plants could significantly stunt their ability to regrow at all. So, all these treasures were summarily removed and taken up to the farmhouse garden. While they’re still in their pots, we’ll see if we can find suitable places for them, but I just noticed that the planting bed—the one I’m re-making beneath the old Kieffer pears and the giant Camellia sasanqua—revealed a cloven hoof print in the soil the other morning. No damage from deer in that bed, yet, thankfully; but it is a reminder to be cautious in plant placement and selection.

Far more of a nuisance than deer in the farmhouse garden are the squirrels. Actually, we have two distinct types of squirrels, the ubiquitous grey squirrel (Sciurus carolinensis) with which everyone is familiar; and the fox squirrel (Sciurus niger) which far fewer people seem to have encountered. The fox squirrel is a ground squirrel, preferring foraging on the ground for the most part. They are two or three times the size of the grey squirrel, and they appear in blacks, whites, greys, browns, solids, spots, and patches. I find them delightful to watch and they interfere only rarely with my gardening or with keeping house. 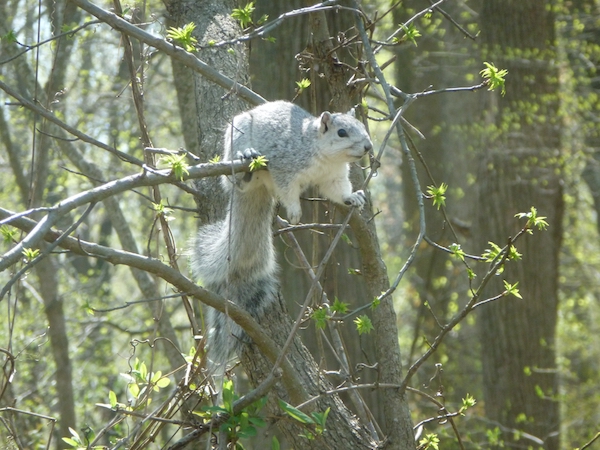 Grey squirrels, on the other hand, daily turn over dozens of my potted plants. Those they don’t turn over, they dig up; whatever is planted is thrown out to see if they have buried a nut in the soil beneath the plant. Sometimes, they have buried a nut there and, a year later I discover I have a large pecan seedling growing in a pot of dainty Dancing Ladies Ginger (Globba winitii).

Before the ice storms took out so many of our trees, I noticed that my father’s apple tree, which hadn’t managed to set a single fruit because of bad timing for its blooming and late frosts, did, in fact, have one branch of apples so high in the tree as to be nearly impossible to get to. Gorgeous big green apples, which would eventually ripen to a rich red. Because there were only a dozen or so, I was watching them closely. And for three days that week I watched as, one by one, several apples were nibbled by a squirrel, found to be unripe (duh!), and thrown to the ground. By the third day, every last apple had been thrown to the ground. This is the tree that I immediately decided needed to be removed, as it was beneath the power line and reaching toward it. Take that, squirrels!

On one of those too infrequent occasions when I made an effort to move several quite large potted plants to suitable planting spots, I was taking to the farm a 15-gallon potted double-file viburnum (Viburnum plicatum var. tomentosum). This wonderful small tree had sat ignored in the woods in the Beaufort County garden, had lost much of the soil around its roots in its pot, and was in serious need of loving attention.

I got the viburnum into the truck and unloaded by the garden shed at the inland farm. A day later, I was removing the pot from the root ball of the tree and discarding the depleted soil when, suddenly, a snake—about a foot and a half long—scurried away into the nearby shrubbery and disappeared.

This spectacular creature was striped red, black, and yellowish white. Though my encounters had been few, somehow I knew immediately the snake was a scarlet king snake—not the non-poisonous scarlet snake, nor the very poisonous coral snake. This is testimony in support of seeing and learning about as many snakes as you can. A gardener never knows when an encounter might occur, and recognizing one’s natural companions can benefit both snake and gardener. 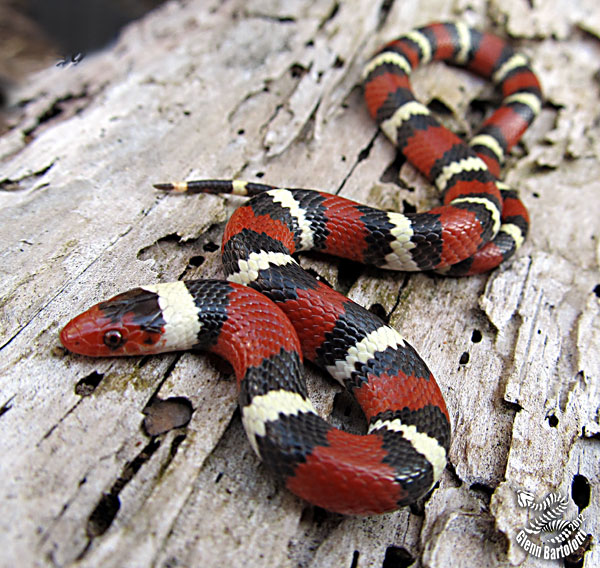 All kitchen gardeners, from Peter Rabbit’s Mr. McGregor to back porch herb gardeners, know well the inevitable interaction between the wild and the carefully maintained. My parsley always draws a horde of swallowtail butterfly larvae, who become as large as mariners’ ropes, engorging themselves on all the leaves in short order. Rabbits proliferate whenever we plant peas and beans, cabbage and lettuce.

And the damn squirrels! I’m convinced they plot with the raccoons and the possums while they watch the corn grow as high as an elephant’s eye. As soon as the kernels in an ear reach a certain size, this gang of marauders scales the fence, climbs up chosen stalks of corn, picks the ripening ears—shucks and silks and all—and carry their bounty back over the fence. There, they peel back the shucks, gnaw the kernels down to the cob, and leave the denuded mess for the field mice to glean the meager morsels left behind. 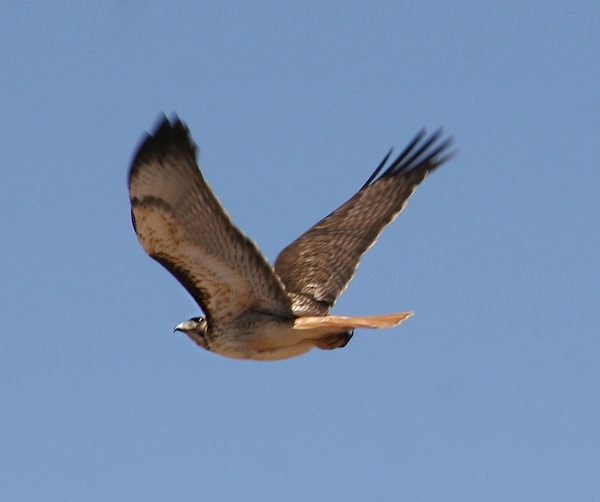 It pleases me enormously to share my space with nature, to be allowed to witness and participate in the always-changing life that the natural world is. (Except, perhaps, the squirrels.) But my gardens and I know how to rejoice when nature takes its course and our resident red-tailed hawk swoops from on high and removes one of these grey rodents from the population.

Even the hawk knows how to celebrate then, and I join in its cries of victory.

2 Responses to Wild Thing, I Think I Love You