Your Heart May Belong to Daddy, But Your House Belongs to Wall Street

“Your neighbor is no longer that millionaire next door. He is quite likely to be a renter whose house, sold on a ‘short sale,’ was bought by real estate speculators with money borrowed from one of Wall Street’s gigantic ‘shadow banks.’” Sanford Rose 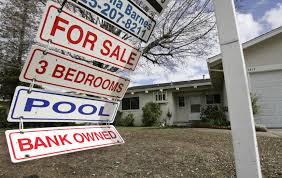 Foreclosed, bank-owned, and for rent.

KISSIMMEE Florida—(Weekly Hubris)—6/3/2013—This is one of those ubiquitous “Yes, but” pieces. I try to avoid them, but I’m often unsuccessful.

“Yes,” the economic outlook has improved. But “No,” it can’t be described as buoyant, what with lackluster growth threatened still further by fiscal cliffs, sequesters and a global economic slowdown.

“Yes,” there is more money in the economy. But “No,” it isn’t being spent and re-spent fast enough. The ratio of income to money languishes at its lowest point in 50 years. Every dollar of readily spendable cash creates less than a measly $1.40 in output.

“Yes,” the official unemployment rate is down to around 7.5 percent. But “No,” that number is not representative. If you add workers employed part time who want full-time jobs and workers who have just stopped looking for jobs, the rate hovers at around 14 percent.

“Yes,” housing has bottomed and even turned up in many parts of the country. But, “No,” the improvement may not prove sustainable. Starts are faltering; lumber prices are down; and the cancellation rate on house purchase contracts has risen substantially.

“Yes,” homes are much more affordable than they were in 2007. But, “No,” there is no mad rush to buy, at least by individual households. Home ownership is now widely viewed as a risky investment. The big push in demand in the last couple of years has come from corporate buyers of foreclosed properties who have promptly turned them into rentals.

Your neighbor is no longer that millionaire next door. He is quite likely to be a renter whose house, sold on a “short sale,” was bought by real estate speculators with money borrowed from one of Wall Street’s gigantic “shadow banks.”