Posted by Elizabeth Boleman-Herring on September 1, 2020 |

“Maya Lin, we need you once again, it seems. But, this time, you will not be memorializing some 58,000 lost souls, but, rather, in America alone, by the time of Biden’s inauguration, over 300,0000. Ms. Lin, you’re going to need more granite. A lot more granite. And, if we are ever to heal from the outrages Trump has perpetrated against this nation, the wound in our earth that symbolizes our casualties in the pandemic must needs be set far, far deeper and stretch far, far wider.”—Elizabeth Boleman-Herring 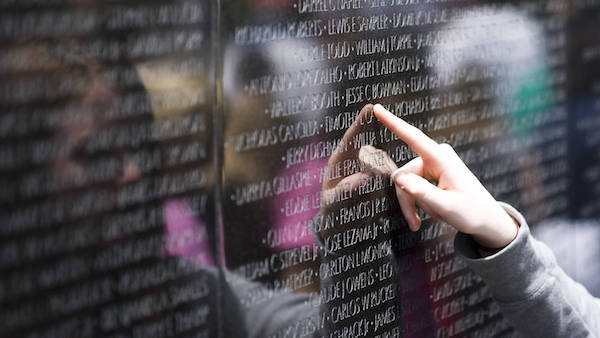 “A person who thinks only about building walls, wherever they may be, and not of building bridges, is not Christian.”―As quoted in “Pope Francis: Donald Trump ‘is not Christian’” (18 February 2016), by Rebecca Kaplan, CBS News.

PENDLETON South Carolina—(Weekly Hubris)—1 September 2020—Over the past four years, I have been compelled, of necessity, to contemplate walls and, more specifically, the wall on the United States’ southern border, that chimera of smoke, mirrors, and grift erected in the disordered mind of Donald Trump to keep out his bogeymen and bamboozle his base.

The border between the United States and Mexico stretches some 1,954 miles, or 3,145 kilometers. To quote Wikipedia: “On December 17, 2019, acting Commissioner of US Customs and Border Protection (CBP) Mark Morgan stated that 93 miles of barriers had been built during the Trump administration; according to CBP, at least 90 miles of that replaced existing structures. By May 2020, only 16 miles out of 194 miles of wall constructed under the Trump administration was not replacement fencing. According to CBP, 275 miles had been completed by August 10.”

So, Trump’s wall is, like all Trump’s works, a figment, a contrivance, a will-o’-the-wisp.

In passing, let me say that I adore that word, will-o’-the-wisp, which derives from ignus fatuus, the Latin for “giddy flame.”

Trump, and all his works, are giddy flames, ignes fatui—what we know now to be swamp gas, or chemiluminescence, caused by the oxidation of phosphine (PH3), diphosphane (P2H4), and methane (CH4) produced by organic decay.

One day, unlike COVID-19, like a miracle, Trump will disappear.

And, when he goes, I should like no monument whatsoever to memorialize him and his enablers.

What I would like, fervently, is a monument to those of us who have died and who will yet die on Trump’s watch due to the raging pandemic Trump could have mitigated had he cared to do so, or had he cared to emulate his predecessors in the Oval Office, who set up systems to address such national calamities.

America needs a place to grieve her dead; a pilgrimage site for us all, once we can gather together to mourn. We need a vast gravestone set in American soil upon which all the names of those we have lost may be written, a monument that will stand as a caution against any future Trump, a wailing wall for all those who need not have been lost.

I have never visited the Vietnam Veterans Memorial Wall, one of whose great, black arms points towards the Washington Monument; the other, towards the Lincoln Memorial, but, back in the early 1980s, when a very young, Asian-American woman won the “blind competition” to design the memorial to the war dead of Vietnam, I followed with great interest the controversy surrounding both sculptor and sculpture.

Maya Lin, born in Athens, Ohio, the daughter of Chinese academics, both immigrants, has said that the intention of her design, her wall-of-names, “was to create an opening or a wound in the earth to symbolize the pain caused by the war and its many casualties.”

She said, “I imagined taking a knife and cutting into the earth, opening it up, and with the passage of time, that initial violence and pain would heal.”

That the design of a 21-year-old Yale undergraduate, the daughter of Asians, the child of immigrants, should be chosen from 1,422 submissions created an uproar at almost every level in America of the 1980s. Eventually, though, after the initial brouhaha, most came to embrace Lin’s concept, her vision of what a monument to the dead of America’s lost war in Southeast Asia should be.

Lin says all her work “originates from a simple desire to make people aware of their surroundings, not just the physical world but also the psychological world we live in.”

She states: “I feel I exist on the boundaries. Somewhere between science and art, art and architecture, public and private, east and west. . . .  I am always trying to find a balance between these opposing forces, finding the place where opposites meet . . . existing not on either side but on the line that divides.”

The Memorial Wall (as per Wikipedia) comprises two 246-foot-9-inch (75.21 m) long black granite walls, polished to a high finish, and etched with the names of the service-people being honored in 140 panels. The walls are sunken into the ground, with the earth behind them. At the highest tip (the apex where they meet), they are 10.1 feet (3.1 m) high, and they taper to a height of 8 inches (200 mm) at their extremities. Symbolically, the wall embodies Lin’s “wound that is closed and healing,” and exemplifies the Land Art movement of the 1960s which produced sculptures that sought to reconnect with the natural environment.

The memorial originally listed 57,939 names when it was dedicated in 1982; however other names have since been added and, as of May 2018, there were 58,320 names, including eight women. (The number of names on the wall is different than the official number of US Vietnam War deaths, which was 58,220 as of May 2018.)

Maya Lin, we need you once again, it seems.

And, if we are ever to heal from the outrages Trump has perpetrated against this nation, the wound in our earth that symbolizes our casualties in the pandemic must needs be set far, far deeper and stretch far, far wider.

This wound—the loss of hundreds of thousands of innocents, gone up in Trump’s ignes fatui—will take far, far longer to heal.