Confessions of An Absent Columnist

“But the wonderful thing about being on Andros was the fact that all this was normal. We always expect a few disasters after a winter away, so this year’s was no surprise. But in town, tavernas were open, we saw friends, had delicious meals, even exchanged a few hesitant hugs, and felt free.”—Diana Farr Louis 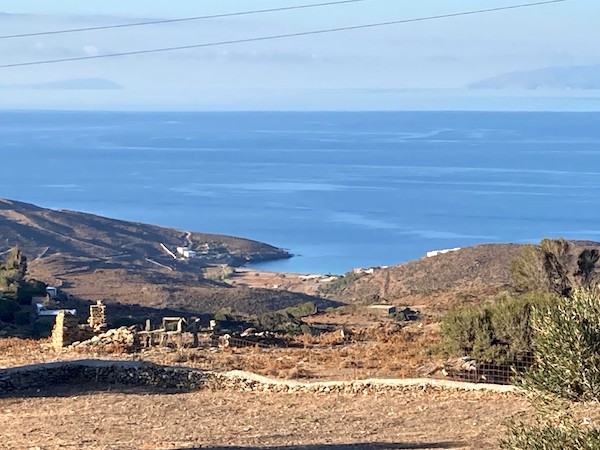 ANDROS Greece—(Weekly Hubris)—1 January 2021—Country life and writing do not mix. After a full six months in the Andros outback, I can’t manage to sit at the laptop long enough to eke out more than a few emails a day, sometimes not even that. There’s always something I’d rather be doing or that demands instant attention.

At first, I could blame the house. When we arrived in mid-June, the whole place was a disaster area. No electricity in half the house due to a fire in one room that had carbonized a plug and a socket but had been extinguished by damp so heavy and pervasive that everything in the room was sodden. One wall was soot black, the bed even had a puddle in the middle of it, and everything—cushions, books, paintings, a 60-year-old trunk, and the bed—had to be trashed. Added to that, the pergola was rotten, and the usual thistle army seemed more ferocious than usual, marshaling troops closer to the house.

Tackling half a room a day, we managed to make two bedrooms and the living area clean and spider-free within a week, but the third bedroom took far longer and required several visits from the electrician who ended up boring a window from our storeroom into the adjacent bedroom to install a new fuse box. (He did leave the rooms almost as dust free as he found them.) Meanwhile, other workmen were leaping on and off scaffolding as they demolished and erected a new pergola, while my husband was trying to hack pathways through the thistle thicket with a hoe.

Of course, time had to be made for the daily swim and trips to the port for groceries.

But the wonderful thing about being on Andros was the fact that all this was normal. We always expect a few disasters after a winter away so this year’s was no surprise. But in town, nobody wore a mask, except for one eccentric fisherman who sat all alone on the waterfront next to his caique, with only a few felines for company. Tavernas were open, we saw friends, had delicious meals, even exchanged a few hesitant hugs, and felt free. 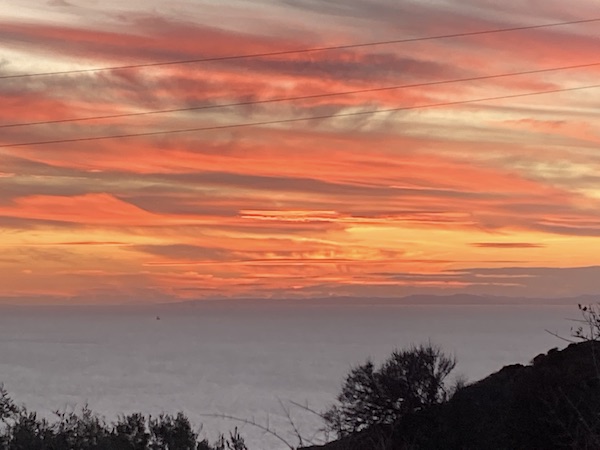 Greece had done so well during the first wave of Covid that we thought our safety would last forever. We had houseguests, our beaches—never terribly crowded since our roads are so appalling—remained comfortably unfrequented, and people did keep their distance (no more clustering at the choice spots with a modicum of shade).

By August, though, as foreigners and Athenians swarmed to this and other islands, we became more wary and did not eat out. We were indignant when tourists—sometimes even “middle-aged” Italians, whom we thought should know better—did not keep their distance in the supermarket or bakery; we called them Coviders under our breath. Upsetting reports aired on the news of beach parties and rave nights on Mykonos, even though the government warned against them and cancelled the popular saints’ days celebrations. We became increasingly apprehensive that Greece’s immunity would not last.

And we were right. But, on the first day of September our island emptied, as though a magician had, with a flick of a cape, eliminated all the outsiders. Bliss returned and so did lots of our friends from the UK, who habitually avoid the summer heat. The wind dropped, the sea warmed up, we held lunch parties, birthday parties, and, in October, olive-picking parties.

And, as if to make up for the deprivations of spring, our failure to enjoy our magnificent irises, wild gladioli, and the neighboring fields blanketed with bright yellow daisies, our trees outdid themselves. First, the figs, so many we were giving them away, purple and then green, for almost three months. Then came the almonds (mostly worm-free) little apples, and pomegranates, all in greater numbers than ever before, while the olive trees were so laden with untainted fruit that we gave up trying to harvest them all, and still feel guilty and ashamed we could not do them justice, even with help from friends.

But carefree though we were on Andros, COVID cases were rising alarmingly on the mainland, and we had begun to wear masks again, but only in shops. Then, on November 7, the government imposed a new, and very strict, countrywide lockdown. Tavernas, cafés, nonessential shops, and schools all shut, even in rural areas and on the dozens of Aegean islands without a single case. I managed to get my hair cut and buy a pair of slippers just in time. 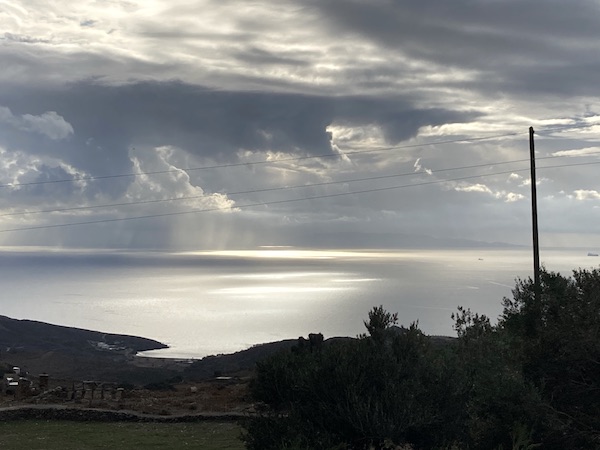 We decided to stay on on the island. With the weather still mild, it felt too soon to hibernate in a city flat. Never mind that we had no winter clothes, the house was warm enough with an a/c converter and fireplace, duvets, and electric blankets. Never mind that we have no WiFi. A portable modem works well enough and a friend puts movies on a USB stick for us, which is better than Netflix.

But it’s still a lockdown, and I find it strange that not socializing, not being able to sit somewhere with friends, has also meant that communication, even phone calls, messaging, and emails, seems to be dwindling too. Apart from a few close friends and relatives, we have practically no contact with the outside world, whether on Andros, in Athens, or further afield.

Perhaps it’s the combined effect of COVID-induced physical isolation and, for Americans and Brits, the angst surrounding the election and Brexit, that has reduced most of us to silence? Are we all depressed, melancholy, self-absorbed? Has the proverbial cat got our tongue?

Some enterprising people have turned the lockdown(s) into creative projects, energetic decluttering, organizing old photos, gardening or have watched all the Metropolitan Opera and National Theatre streamed archives. Me? I’ve just been communing with nature, from spring flowers in Athens to our trees and seas on Andros. Content to watch the land finally turn green again, the hills turn pink with heather, the lemons turn yellow, and the horizon as it changes daily from vividly silhouetted islands to glorious streaky sunsets to fog-bound white-flecked gray water.

I don’t feel that I should have been doing something more productive, but this winter, locked down by weather as well as COVID, I’m determined to mine these months of nonverbal communication for inspiration, to get back to the written word, and reflect on having somehow reached the age of 80 and passed my expiry date. Perhaps my only regret will be not having spent the past six months learning how to speak with the sheep and goats, our closest neighbors. 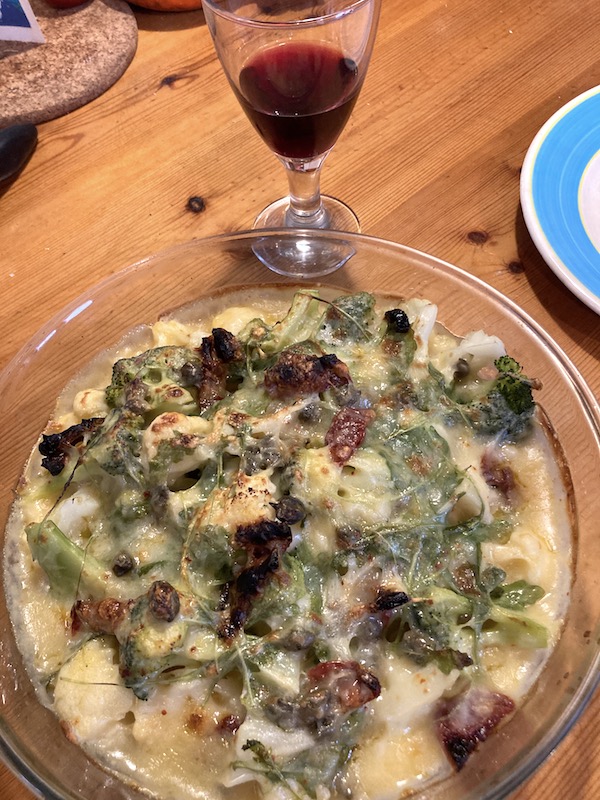 Cauliflower and broccoli are among our favorite foods. Somehow, we never tire of them and eat them, one way or another, all winter at least once a week. One staple recipe is this gratin, which uses the broth I boil the cauliflower in rather than milk for the bechamel, and to which I add extras like bacon or ham, sun-dried tomatoes, capers, and grated cheese. You can vary this with whatever you like or have on hand.

Bring the broth to the boil in at least 2 cups of water, add the cauliflower and cook until al dente. Take out the cauliflower with a slotted spoon, drain, and place in a baking dish. Heat the butter in a saucepan, whisk in the flour, and stir until slightly browned, add the liquid—I always find this is a bit tricky, so I won’t specify amounts. You can always add some more if necessary. At Cordon Bleu, we learned to add the liquid in one go, off heat, so that’s what I do, then put it back to simmer until thick.  Add the grated cheese and stir until melted.

Sprinkle the tomatoes, bacon, capers amongst the cauliflower. Pour the bechamel on top more or less evenly. Sprinkle with more grated cheese and bake in a preheated hot oven for about 20-25 minutes. If it hasn’t browned, switch to grill for 5 minutes.

(Coincidentally, the day I was writing this column, I had decided to make a pizza with some leftover phyllo pastry. However, it was obviously more past its expiry date than I, myself, and would not come unstuck. So, I had to fall back on this staple. This time, I only had half a cauliflower and half a broccoli, so both went into the broth. Having no bacon, I threw in a handful of arugula. It was delicious, so feel free to experiment!)

One Response to Confessions of An Absent Columnist