“Advent in general, and in the year 2020 more specifically, arrived with an unimaginable—not imaginable—host of negativities: skepticism, bitter certainties, despair, and cynicism nipping at the outer flanks of what we hope is true. We pondered these bitter convictions: that certain mistakes can never be unmade, that loneliness is the final word, that death is the end, that vindictive self-righteousness dwells where forgiveness used to reign, that peace is an unattainable ideal, that injustice and elitism and greed and oppression are the rules by which the world plays. Not impossible. Not impossible. Not impossible. I feel as though I am saying it over and over and over like a mantra.”—The Rev. Robin White 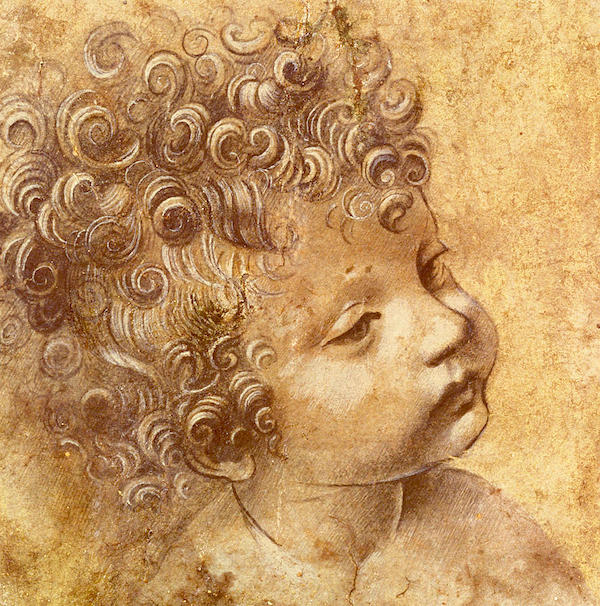 “Study of a Child,” by Leonardo da Vinci.

I didn’t know what this “wedlock” thing was, but I knew it was something serious. As I half-listened to their conversation, I was able to deduce that having this baby was a perilous affair and that Shirley’s life had been ruined. I can still recall the sick feeling in my stomach—sadness, despair, hopelessness—as they spoke of her impossible situation.

And then, Michael was born and Shirley’s decision to raise her baby on her own rather than heeding the advice of so many who had urged her to give him up for adoption actually seemed appropriate and even unremarkable. Not remarkable. Mother and baby attended church regularly and he not only became the shining light of Shirley’s life, but also the life of the church, his extended family. With blue eyes, a halo of sandy curls, and skin the color of the peonies in my mother’s garden, Michael mirrored my favorite baby doll and I longed to claim him as my own. Now that I am fully grown and looking back on those days, I suspect that I was not alone in my yearning to embrace this golden child: Michael was adorable and adored by all.

I remember the year he was twelve and played the angel Gabriel in the church Christmas pageant. At the dress rehearsal, where I assisted with the production, Michael grinned at me and asked, “Am I supposed to walk up to Mary or should I fly?

He was such a gift to our community, I almost believed that flying was not impossible for this love child. 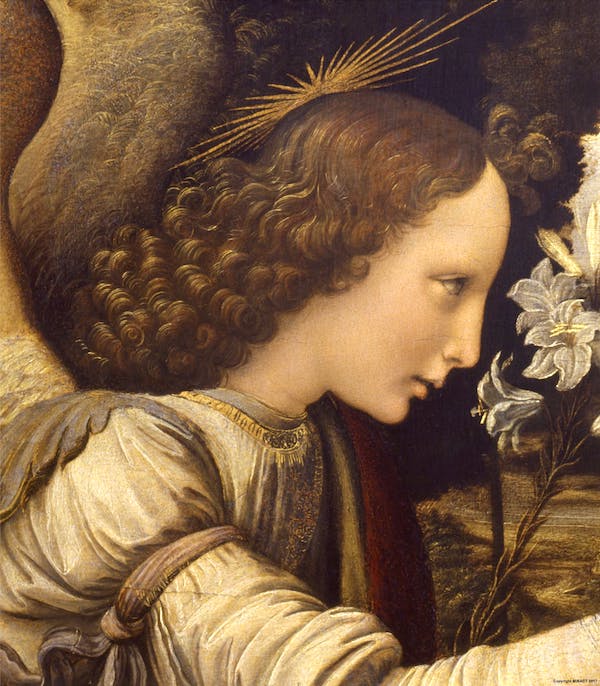 Detail from “The Annunciation,” by Leonardo da Vinci.

Soon after that Christmas, Michael’s mother was diagnosed with terminal cancer and Michael spent the next year watching over Shirley as her body succumbed to the disease. While most adolescents are consumed with negotiating issues such as peer pressure and self-determination, Michael was ever-present, attending to his mother, who was in and out of the hospital with a prognosis that was dire. Shirley lived much longer than any doctor thought she could or would and we all knew why. When she finally died, Michael’s mother left behind her a beautiful, strong, brilliant trail of light.

You know, there were many people in that narrow-minded town during a narrow-minded time, who referred to Michael as a mistake, as something immoral. Not moral. It was in reference to Michael that I first learned the meaning of the word “bastard.” But Michael was no mistake. In the midst of what many called an impossible situation, the Divine interrupted, intervened, and lavished with favor something, someone labeled bad, unscrupulous, or perverse. Once again, God picks the wrong people, chooses the wrong situation, and breaks through to make an appearance.

We find, in our text for today, the angel Gabriel interrupting what would appear to be normal, everyday life in order to deliver a message that changes the course of a young girl’s life; a message that, if we let it, will change the course of our lives as well.

Mary finds herself in questionable circumstances—poor, unmarried and pregnant—when Gabriel delivers what (it would seem) is God’s answer, God’s solution: “With God nothing will be impossible.” Preacher and biblical scholar Fred Craddick calls this verse “the creed behind all other creeds.” He writes, “The church should recite it often, not only at the manger, not only at the empty tomb, but on any occasion of reflecting on its own life, joy, and hope.”

Because I believe the purpose of any creed is to startle us back into belief, I like New Testament scholar Raymond Brown’s literal rendering of this verse: “Because not impossible will be every word with God.” 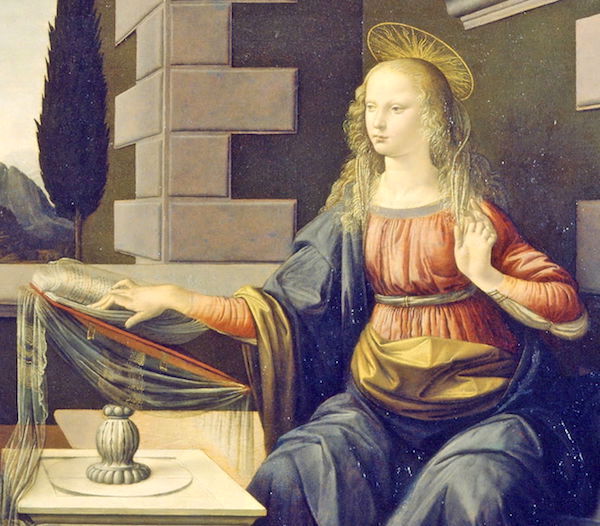 Detail from “The Annunciation,” by Leonardo da Vinci.

Not impossible—not and the prefix im- stacked one on the another—a weirdly powerful double negative. These two negatives cancel each other out with gusto and trumpet the positive. But why wouldn’t the writer simply have said, “All things are possible with God?” Why use two negatives to communicate an affirmative? Why bother? It seems just a little unnecessary. Not necessary.

Advent in general, and in the year 2020 more specifically, arrived with an unimaginable—not imaginable—host of negativities: skepticism, bitter certainties, despair, and cynicism nipping at the outer flanks of what we hope is true. We pondered these bitter convictions: that certain mistakes can never be unmade, that loneliness is the final word, that death is the end, that vindictive self-righteousness dwells where forgiveness used to reign, that peace is an unattainable ideal, that injustice and elitism and greed and oppression are the rules by which the world plays.

“The Annunciation,” by Leonardo da Vinci.

In the middle of an argument, a seemingly endless argument with the person with whom you had planned to spend the rest of your life, looking into that cold face, wondering if the relationship is over, you whisper: “Not impossible . . .”

You visit the doctor one cold afternoon and learn that the lump in your breast is malignant, and you whisper, “Not impossible . . .”

You look at the pile of bills, knowing full well that you can’t begin make the payments, and you whisper, “Not impossible . . .”

In the middle of the night, when you are up, grieving the loss of someone you have loved dearly; inconsolable, you whisper, “Not impossible . . .”

You watch or read the evening news, which teems with death and violence and madness, and you whisper, “Not impossible . . .”

Why am I here knowing what I know about myself? Because, Not Impossible.

Why are you here knowing what you know about yourself? Because, Not Impossible.

How many of us are burdened this day with nots and im-s?  Perhaps if we take time to set aside the seasonal cheer, let the holiday carols subside, we might hear the monumental clanking together of not and impossible, beating against each other, beating out an anguished lament of the seeming reality of despair, beating out the injustice that aches for reversal, beating out of the arrogance that cries to be brought low, beating out old resentments, the unfinished things that squeeze the life out of us, beating loneliness against loneliness until they companion each other . . . beating it all into ploughshares to furrow the barrenness so that life may spring forth. 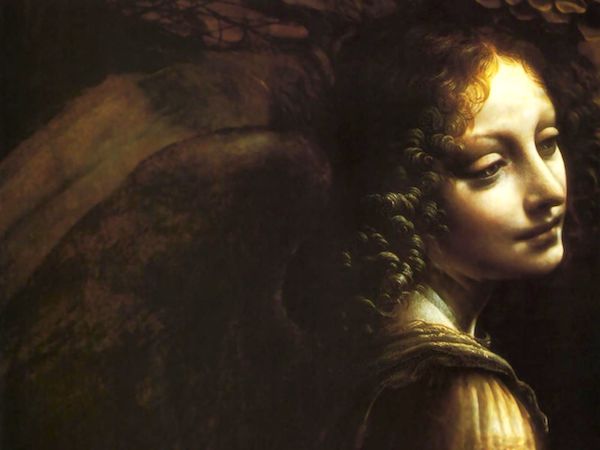 “An Angel,” by Leonardo da Vinci.

On Christmas Eve many years ago, I called the children forward for the children’s sermon. The story I had chosen for this particular night was a Christmas tale about a little lamb whose legs did not work and, so, was range-bound . . . relegated to the barn floor. The story ended with the lamb wrapping her body around the baby Jesus with a gift of warmth.

As nearly 50 children gathered around me on the sanctuary floor and I was just about to begin reading when I heard a strange clanking noise. Clank . . . clank . . . clank . . .  I looked up from the book, and there, coming up the center aisle, was tiny Lizzy MacDonald, struggling to maneuver her toy-like walker.  Lizzy was the granddaughter of longtime members, elders of that church.  She had been born with dwarfism among multiple other medical issues.  The prognosis given by the expert medical staff at A. I. Dupont Children’s Hospital in Wilmington, Delaware was grim. Immediately after she was born, in the hospital where she spent the first ten months of her life, Lizzy would code, and require emergency resuscitation several times a day. Her mother reported that, as soon as she was stabilized, Lizzy would start to giggle.

As she made her way to the front of the sanctuary that Christmas Eve, the little girl who was never supposed to walk, we all knew: Not Impossible.

As I read the story of the gift of the paralyzed lamb, we all sighed in our hearts—as Mary did when she heard Gabriel’s message and responded, “Let it be.”

If Mary sings as though the future is already so, the impossible is already possible, perhaps we too will finally know that in her song is the song of God’s future, and God’s present. Not Impossible. Whisper it . . . again and again. Not impossible . . . until that whisper becomes a song which all heaven and nature sing.

“Not Impossible,” by The Rev. Robin K. White.