“When I had fallen asleep, I could not tell, but sometime in the hush of darkness, coyote came. His glowing eyes staring at me through the glass woke me, their silent intensity captivating. I sat up slowly, not wanting to frighten him away. He remained very still, examining me intently. We gazed at each other for some time.”—Helen Noakes 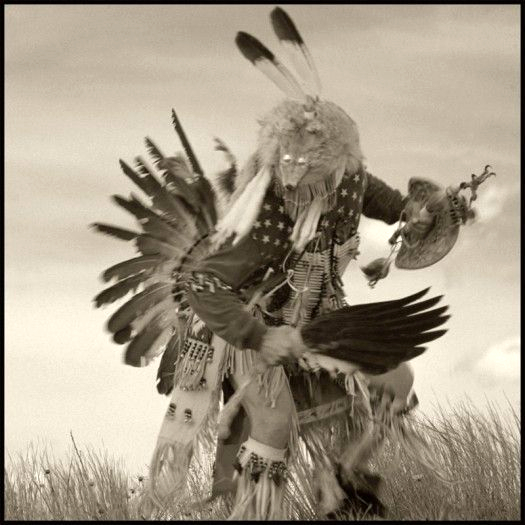 SAN FRANCISCO California—(Weekly Hubris)—February 2020—It was the mountains, Georgia O’Keefe blue in the distance, the light, as relentless as Greek light, the scent of wild grasses, dry earth, the strange sense of belonging—it was all that and something else, something beyond definition—it was love at first sight. It was Santa Fe. And it was the sky, big and blue one minute, petulant with gathering afternoon clouds and growling with thunder the next.

With the ease of an expert lover, Santa Fe seduced me. I decided then and there, without hesitation or reason, that this would be the America of my return.

My ten years in Europe had come to an end. It was 1991, and time to come home. But on my journey back, in the quiet of the British Airways flight to San Francisco, I knew that “home” was an unknown place, a question mark on the map of my suddenly empty life.

Having spent the last two years in London, I longed for the vast expanses of the American West, made tantalizing in the Technicolor dreams spun by the films of my childhood, by cowboy poets, and due to my urgent need to escape pavements and high rises.

So, I went to Santa Fe, just for a visit, and found myself driving directly to the house on Calle de Leon. The house that would become mine sat on open land surrounded by enormous pinions and fragrant Russian olives. It nestled peacefully on soil too wild to cultivate, soil that would burst into bright rose blooms every spring, marking the thousands of tiny cacti hiding in its tan and thirsty skin. This house, offering unfettered views of the mountains and the ever-changing sky, claimed me.

Was it chance that compelled me to roll out my sleeping bag that first night in its living room? Earlier, in the late afternoon, I wandered through the empty rooms, planning the changes I would make to open its small rooms up to the acre of land that surrounded it. I chose my sleeping place because of the large window which allowed uninterrupted views of the Sangre de Cristo Mountains in the distance. Mesmerized, I gazed out at them until an indigo night hid them from view, but I was soon rewarded by a breathtaking display of a star-spangled sky.

When I had fallen asleep, I could not tell, but sometime in the hush of darkness, coyote came. His glowing eyes staring at me through the glass woke me, their silent intensity captivating. I sat up slowly, not wanting to frighten him away. He remained very still, examining me intently. We gazed at each other for some time.

So many thoughts flitted through my mind in that wordless exchange. I recalled the Native American myths of coyote. In those legends, he is always male, and endowed with the wisdom of a trickster, teaching humans to see the humor in adversity. Having gone through an extremely difficult few months in England, I marveled at the perfect message in coyote’s presence. Why he reminded me of Hermes, I do not know, but my myth-loving mind saw similarities. Coyote could be as vulgar as Hermes, and as cruel in his manipulation of humans. I suddenly realized that my idealized version of Santa Fe was being challenged. Whatever lay ahead, I was to pay attention and not disappear into a myth of my own making.

As if acknowledging my epiphany, coyote gave a little nod, turned, and trotted down to the arroyo.

Why I wept, I cannot say. I sat watching the night for coyote’s return, feeling touched by that something indefinable that drew me to this place, and realized that it was indefinable no more. It was the wild, the untamed reality behind the façade of control. It was life with no pretense. It was here if I chose it.

I had felt this once before, on a rough mountainside in Greece, at an ancient site called Lykosoura— the place of wolves—where Zeus himself was given the honor of donning the aspect of the wolf.

Wolves and mountains sang to me then, as they did on that first night in my first home of my return. And, although coyotes are not strictly wolves, they have the spirit of unrestrained freedom for which I’ve always longed.

Coyote never looked in on me again, but I would hear it howl and yip at night. 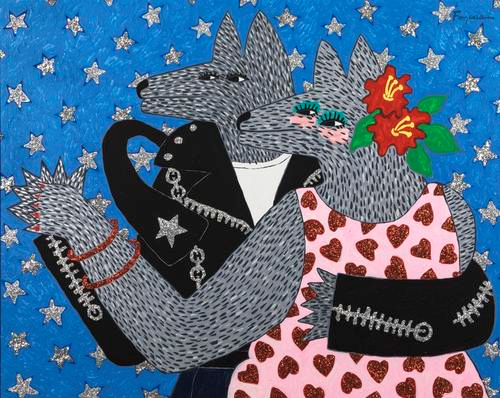 “Coyote and Rose,” by Harry Fonseca.

A couple of years later, coyote made his presence felt through a great friend I met in Santa Fe, Harry Fonseca. A remarkable artist, Harry loved coyote, portraying him in comic macho stances, entwined with his female counterpart, Rose, she of the femme fatale mode. Harry played with the trickster aspect of coyote’s reputation, pointing out the absurdities in the little dramas we humans take so seriously.

Harry’s work went far beyond coyote. True to his Native American heritage, he painted several series of subjects: St. Francis, crosses and what they really mean to Native Americans, abstracts. Series, he said, were not only part of his cultural heritage, but explorations of the many aspects of a subject.

In 2003, he joined me in Paris. We stayed on the Rue de Seine, a mere walk across the Pont des Arts to the Louvre, and made a day of the museum. He wanted me to walk him through the Greek antiquities so that he might pick my brain. I wanted him to walk me through his favorite painting collections, so I could pick his. It was that kind of friendship. We talked endlessly, found humor in much, sat quietly listening to each other’s more serious thoughts. It was as real and solid as any relationship could be. 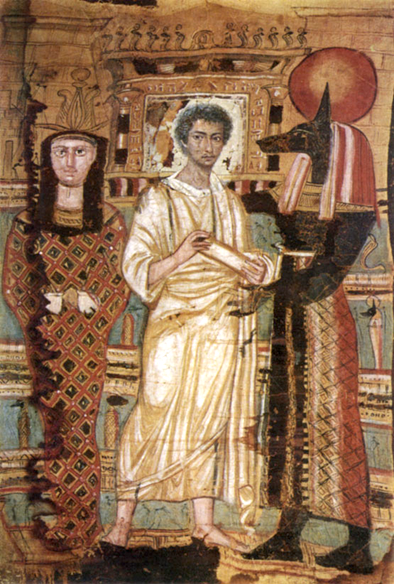 Fayoum Portrait of a man being led into the afterlife flanked by Osiris (left) and Anubis (right).

On that visit to the Louvre, I took Harry to the Fayoum portraits. I needed to show him one specific painting of Anubis leading a soul into the afterlife. We stood before the image, silent for a long time before I said, “Is this coyote’s true self, do you think? After he drops his costumes and attitude?” Harry responded by turning to me and smiling. We talked about the fact that these funerary portraits expressed hope rather than sorrow, looked forward rather than away.

Later, Harry chose to sit before an El Greco crucifixion. He pointed out the nuances, the play of light, the gossamer feel of El Greco’s palette, with their obvious allusions to the Resurrection.

As we crossed the bridge back to our apartment, minds filled with art, eager to get out of the October drizzle, put up our feet, have some tea and—what else—talk, Harry said that he wanted me to join him and his partner on a trip to Greece. He wanted me to take them to Lykosoura, in the wilds of Arcadia, to the half-buried sites on Delos, so many places we’d discussed. We made plans over our mugs of tea in that beautiful apartment on a rainy afternoon in Paris. Such plans!

But Harry had a greater journey in store, one that did not include his partner or me. Harry died a few months later, unexpectedly, of an aneurism. To this day, I wonder why I felt the urgent need to introduce him to Anubis, to take him to the Fayoums.

While I could not follow him just yet, his taking that journey impacted my voyage through this thing I call my life. His art, his words, his spirit, taught me to look at my reality with coyote’s sense of humor, and a reverence for exploration.

It isn’t easy, but if I think of Harry’s studies in paint, I can look at my life as a series of experiences—divergent views interlocking into one multifaceted story. He taught me to be fearless in peeling away the costumes, to trust my intuition. If I hadn’t, those many years ago when I moved to Santa Fe, we would never have met, and what a loss that would have been.