“Whichever head you listen to, the bark may be slightly different but the bite is the same: vote Republican in 2016 and you’re voting for the whole Tea Party megillah. It’s a nativist, racist, imperialist, misogynist, and supremely Luddite platform that conflates church and state, and it’s based on the fear of a small, loud bloc of the US electorate that’s been left behind by 21st-century realities.”—By Elizabeth Boleman-Herring

“We will carpet-bomb them into oblivion. I don’t know if sand can glow in the dark, but we’re going to find out!”—Ted Cruz, December 2015

“I could stand in the middle of Fifth Avenue and shoot people and I wouldn’t lose voters.”—Donald Trump, January 2016

“[Regarding climate change] “I am just saying that I am concerned about it, but I am not laying (sic) awake at night worrying the sky is falling.”—John Kasich, November 2012 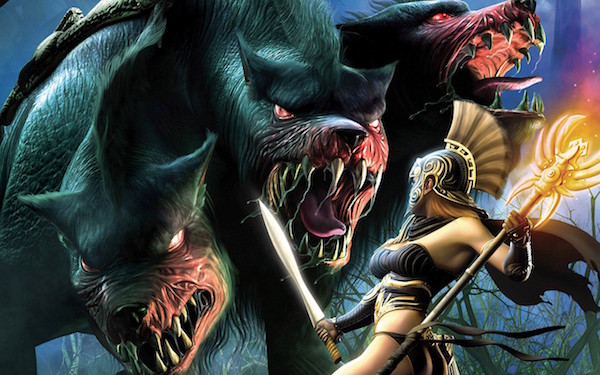 PETIT TRIANON Florida—(Weekly Hubris)—3/21/2016—Cerberus, the Ancient Greeks’ hound of hell, guardian of the underworld, is usually depicted as three-headed, making him the ideal metaphor for Trump, Cruz, and Kasich, who are all equally terrifying as avatars of Republican-base madness and mayhem in the fraught lead-up to the American presidential election of 2016.

Whichever head you listen to, the bark may be slightly different but the bite is the same: vote Republican in 2016 and you’re voting for the whole Tea Party megillah. It’s a nativist, racist, imperialist, misogynist, and supremely Luddite platform that conflates church and state, and it’s based on the fear of a small, loud bloc of the US electorate that’s been left behind by 21st-century realities.

Of the three talking heads comprising the Republican Cerberus, Trump’s is the loudest and Cruz’s the most lunatic . . . but don’t discount Kasich, who’s as fringe as his two brethren, if more canny: his platform is as Tea Party as they come, but the man’s savvy enough not to have adopted (at least recently) the frothing-at-the-mouth rhetoric of Trump and Cruz.

He continues: “It’s the moderates who fly under the shadow of extremists you have to watch, because it’s people who are perceived as moderates who are much more likely to get things done—and standing right next to an extremist who’s clumsy and brazen enough to come off as extremist is the best way for another extremist to look moderate.”

Only on a dog like Cerberus, where two heads are those of snarling, steroid-enraged, bred-to-kill pit bulls (Cruz and Trump—though I do pit bulls a grave disservice here) does a rabid spaniel’s head such as Kasich’s appear . . . moderate.

Continues Chu: “But try selling Kasich’s ‘moderate’ record to a pregnant woman in rural Ohio who would need to drive for two hours to find an abortion clinic—with her counselor legally barred from talking to her about how to do so—but only five minutes to buy a gun and ammunition. Or tell that to one of the teachers ‘complaining’ in the teacher’s lounge because of his cuts to public schools in favor of an online charter school push that turned out to be a giant scam—a scandal that his underling David Hansen has been tarred and feathered for in the Ohio press but that somehow hasn’t stuck to Kasich nationally at all.”

When Trump trumpets, “Make America great again,” it’s code for: 1) make whites the undisputed over-class and return people of color to “their place”; 2) dumb down women and send them back to the kitchen, barefoot and pregnant as opposed to taking uneducated white men’s jobs (and being uppity); 3) erect walls, both literal and abstract, to keep out all the wetbacks and, somehow, stop all evil foreigners (like the Chinese) from stealing our jobs; 4) dismantle anything with Obama’s fingerprints on it (i.e. Obamacare), and just erase the fact that a Black man ever became president in the first place, 5) dismantle any and all government and non-government agencies currently interfering with the game plan of the donor class (the EPA, the IRS, all labor unions), 6) prevent the central government from having any say at all regarding education, and teach Creationism from coast to coast 7) reverse Roe vs. Wade and criminalize gay marriage, 8) ban all Muslims from entering the country, 9) beef up the already bloated military and, somehow, carpet bomb ISIS, and/or capture them and incarcerate them in Guantanamo, waterboarding them or, preferably, worse, for the duration, 10) recall all of Obama’s Supreme Court nominees and ensure that future justices are clones of Antonin Scalia, 11) tear down the wall between evangelical so-called Christianity and the State, and 12) deny Climate Change, as US policy, once and for all.

Trump and Cruz, at least, don’t speak in code, bless ‘em: their shared platform (see paragraph above) is pretty much spelled out, in block letters, in their speeches. Kasich, on the other hand, is a fellow traveler of the first water, but just the smartest dog in this race.

Stated baldly, Trump, Cruz, and Kasich would have us turn back the clock to 1955, and tread water there for the duration (which, in Cruz’s case, would only last till The Rapture).

Again, I quote Arthur Chu: “. . . it pains me to see people who don’t know any better saying nice things about John Kasich he doesn’t deserve. It bothers me to see Trump’s open extremism scare people so much that even the appearance of moderation is enough to make people enthusiastically run to someone’s side—even when Trump is, in fact, more ‘moderate’ on the issue of abortion than Kasich is. I have no faith in Donald Trump’s future consistent support of Planned Parenthood in that I have no faith in Donald Trump’s future consistent behavior in anything. But John Kasich’s record on abortion is consistent, and it’s bad. Kasich, unlike Trump, is a seasoned, effective and competent leader—he is effective and competent at achieving bad goals [italics mine].

“All the things that ‘moderate’ GOP leaders like about Kasich and hate about Trump—the fact that they can rely on Kasich to incrementally, successfully push forward a right-wing agenda without rocking the boat or sparking a backlash—are exactly the things that make Kasich and his ilk a more insidious long-term threat than Trump.  . . .  I’m not interested in a debate over whether Kasich or Trump is ‘worse’; they’re two heads of the same hydra.”

Well, I prefer my analogy—to Cerberus—than Mr. Chu’s hydra. (Ye gods, hydras have innumerable heads, and three are about all I can deal with right now!)

But imagining that we’re going to be finished and done with this tripartite hound by November is, I believe, a pipe dream. My worst nightmare is that the Tea Party, and bad hats such as Cruz, Trump, and Kasich, are with us for the foreseeable future. At a brokered convention, it’s even conceivable that we might get two of them on a Republican ticket or, perhaps worse, end up with a Ryan/Kasich ticket.

At that point, Mr. Chu, your hydra will have trumped my three-dog-night of the soul.

In researching this short op-ed, I was astonished not to find more direct quotes attributed to John Kasich in the media. Arthur Chu, of Salon.com, was the exception but, then, being a Clevelander, he’s seen the damage Kasich has done, up close and personal. I excerpt his March 16, 2016 Salon.com piece at length, and commend him for his reporting and analysis.

6) For a fascinating disquisition on a current meme: “literally Hitler.”

2 Responses to Cruz, Trump & Kasich: The Three Heads of Cerberus