Posted by Sterling Eisiminger on November 4, 2016 |

“Exactly what is this abstraction that haunts us? The literature is vast and complex. Augustine thought a man’s erection was a revolt against God. Eighteenth-century Shakers decided intercourse had been Eve’s original sin. Nineteenth-century Scottish Presbyterians thought eating potatoes was sinful because they’re not mentioned in the Bible.” —Skip Eisiminger 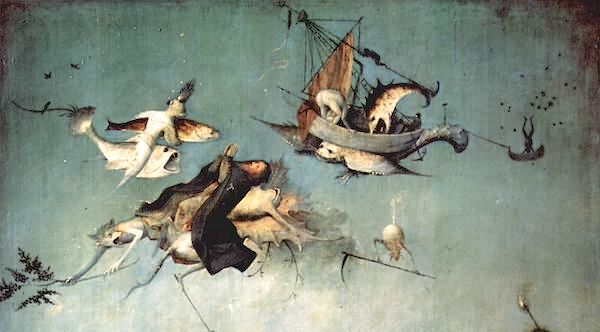 “The Temptation of St. Anthony” (detail), by Hieronymus Bosch.

“The Catholic Church holds it better for sun and moon to drop from heaven, for the earth to fail, and for all the many millions who are on it to die of starvation in extremest agony . . . than that one soul, I will not say should be lost, but should commit one single venial sin . . . .” —Cardinal Newman

CLEMSON South Carolina—(Weekly Hubris)—November 2016—My father used to say that just because three lefts make a right downtown, I shouldn’t assume that two bads make a good everywhere else. This was his military-engineer way of saying that the moral arithmetic of sin is complex.

In the first century, St. Paul counted 17 sins that would rule out heaven for the Galatians but, by the 4th century, that number had dropped to eight in a list which now included “sorrow” (at another’s success) and “boasting.” In 590, Pope Gregory subtracted these two late-comers and added “envy,” leaving us the “Seven Deadly Sins.”

Today we enjoy all of Paul’s sins and a passel he never dreamed of. (Neither Paul nor the Pope has recognized the failure to vote as a sin, which I promise to rectify as soon as I am appointed to the pontificate.)

So, what are the seven that made the cut? As a self-imposed exercise to illustrate some points in Dante’s Inferno, I once wrote a quiver of crotchets; however, the question was not “what,” but “who are the prototypes of sin?” 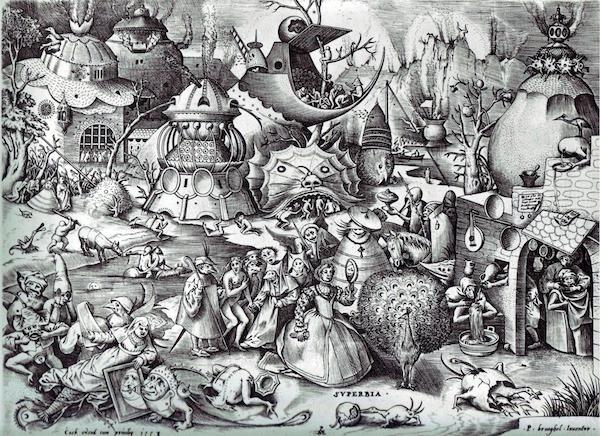 “The Seven Deadly Sins or the Seven Vices,” by Pieter Bruegel the Elder.

Pride, who struts at the head of the perp walk, is my only non-fiction character: “King Henry the Eighth,/who left six wives sour,/has the largest codpiece/in the Tower.”

Henry is followed by Avarice or Greed, the sole insect: “Should J. D. Leech lodge/in a client’s crease,/he can suck at both ends/without surcease.”

Greed is accompanied by Lust: “Jack is wanton/as pollen in a breeze/seeding each moist crease/before Jill can sneeze.”

Behind this cute couple stumps Wrath: “Lay a word across Sue/and start a fire—/the insulation is stripped/from her wire.”

And last comes Sloth, surpassingly slow: “Though Joe was stillborn/right up to his ears,/last rites were postponed/for sixty-eight years.” 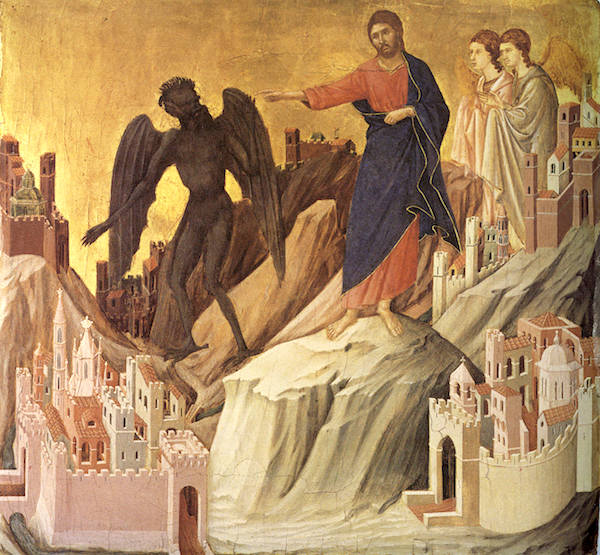 “Cain and Abel,” by William Blake.

For many church goers, sin is a close companion of evil. However, the first death recorded in the Bible was caused by Cain, who murdered Abel out of jealousy and rage. But nowhere does the author of Genesis suggest that Satan, evil personified, influenced Eve’s eldest to kill his brother the way the serpent had tempted her.

Cain, therefore, is not “Evil,” but the murder of his brother is.

In 2007, after a psychopath killed 32 Virginia Tech students and faculty, Dr. David Shi, the President of Furman University, wrote a guest editorial for the Greenville News in which he stated: “There are to be sure, no easy explanations for heinous behavior, but what is usually missing from the media’s sound-bite analyses is an awareness that evil still flourishes in this supposedly enlightened world . . . .”

Despite what dictionaries say about nouns representing ideas, I still urge students to use “evil” in most cases as a modifier, not a word meaning “causal agent.” Treating “evil” as a substantive (as Melville did in Billy Budd, as Steven Spielberg does in The Duel, or as Shi did in his op-ed piece), overlooks its causes and implies that there are simple fixes such as ritual and prayer.

An objectified “Evil” or personified “Satan” may appear like something that can be controlled just like the hurricane Pat Robertson and his minions “steered” off the Virginia coast into Long Island. Alas, neither the church nor the pharmacy has a fix for acts of God or the wrong that men do.

The devil, of course, is a metaphor or scapegoat for evil, not an invisible but tractable force like magnetism or gravity. To make “evil” any more than the descriptive it properly is in most cases, is to grant it more power than it deserves, or what Lance Morrow calls “the prestige of the absolute.” Time’s former editorial writer once advised that we “keep our metaphysics manageable” lest they “get dressed up as a big idea and come to the table” on cloven feet.

Though the Justice Department’s list of crimes is longer than Paul’s, neither sin nor evil is any more of a problem today than it was for Jesus or Melville. It’s just that our classification system is more refined.

What was at work in Blacksburg, Virginia were medicines that failed the shooter, alienation, bullying, the gun culture, brain and personality disorders, distant families, and a host of other verifiable causes. “Evil” did not kill those innocents; it was done by an angry, disturbed person who committed evil acts. To blame some metaphysical monster is to skirt our responsibility in this crime. 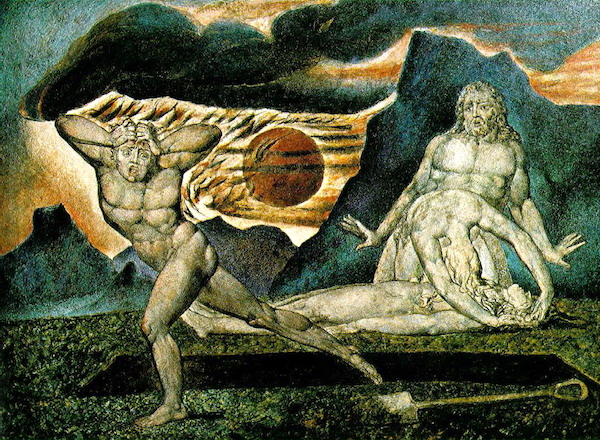 “The Temptation of Christ on the Mountain,” by Duccio di Buoninsegna.

When my mother had a heart catheterization years ago, my father estimated that about half the people who called after the procedure sounded disappointed that there was nothing seriously wrong. Emily Dickinson attributed this lack of charity to our “freckled human nature.” The Germans call it Schadenfreude, the joy begotten by the misfortune of others. But no one should call it “Evil.”

A Baptist woman with a nose for sin once scolded my wife for washing the car on Sunday. Replied my wife, “But your husband sometimes drives through the carwash before church. Isn’t that a form of working?”

On another occasion, this woman said her church didn’t allow make-up. “But aren’t you wearing make-up?” Ingrid inquired.

Ingrid was left wondering whether speed and visibility have anything to do with sin. I told her of a surgeon who thought he’d discovered the source of “evil” when he lanced what he thought was a boil and found himself face to face with the squirming larva of a botfly. If only metaphysics were as easy as medicine.

Exactly what is this abstraction that haunts us?

The literature is vast and complex. Augustine thought a man’s erection was a revolt against God. Eighteenth-century Shakers decided intercourse had been Eve’s original sin. Nineteenth-century Scottish Presbyterians thought eating potatoes was sinful because they’re not mentioned in the Bible. And in our own time, Mother Teresa admitted that the first time she saw lepers, she wanted to kill them for insulting divine benevolence. No wonder Frederick the Wise was both Luther’s patron and the owner of enough relics to reduce his time in purgatory by nearly two million years.

Deliver me from “Evil,” Great Spirit, but I’d like to check in with it once in a while. If Eve had not sinned, the species we call “human” would be little better than the social insects, programmed or predestined from the start, so I’ll abide with the freckled Earth. Even Eden had its serpent.

To order copies of Skip Eisiminger’s Letters to the Grandchildren (Clemson University Digital Press), click on the book cover below or contact: Center for Electronic and Digital Publishing, Strode Tower, Box 340522, Clemson SC 29634-0522.