“For reasons of my own, when I think of the Swedes, when I put aside the fact that they gave the Nobel Prize for Literature to Bob Dylan, I think of meatballs, nightingales, massages, smorgasbords, and Volvos.”—Skip Eisiminger 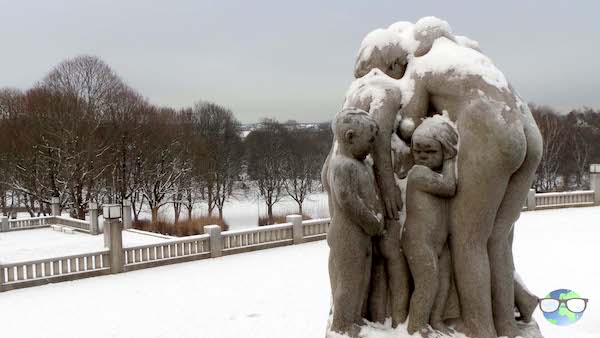 I. “There’s no bad weather, only bad clothing.”—Nordic proverb

CLEMSON South Carolina—(Weekly Hubris)—January 2020—Cold and blue. That’s the way I remember Scandinavia 68 years after a two-week, three-legged tour with my parents when I was nine. In the late 1940s, we were living in West Germany, where my father was part of the occupation forces charged with rebuilding the country he’d helped to destroy. In the spring of 1948, Dad announced that he wanted to photograph the relatively undamaged north before he was reassigned to the States. In a light rain, Mother, Dad, and I headed to Copenhagen, where all I recall is The Little Mermaid shivering in the harbor set against a cobalt-blue sky, but I may just be recalling Dad’s photograph of her. Next, we took a ferry to Malmö, Sweden, drove north to Stockholm, west to Oslo, and then caught another ferry to Copenhagen. I recall a naked forest of sailboats in the Stockholm harbor but little else. The most lasting image of the entire trip was that writhing stone column of naked humanity in Oslo’s Frogner Park. While I shivered looking up at this “Viking Maypole,” dozens of Norwegians were sunning themselves in unlined swimsuits. Like I said, cold and blue. 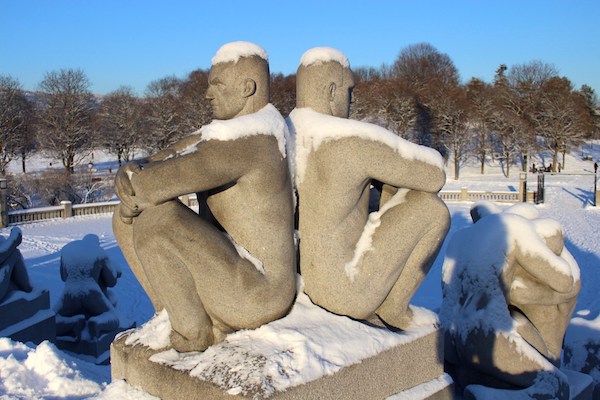 More of Gustav Vigeland’s work, under snow, in Frogner Park.

Abraham Roback, author of A Dictionary of International Slurs, opens his section on Scandinavia, “There is not much to report on Scandinavian slurs.” When Scandinavians speak of each other, Roback says, their talk boils down to “good-natured banter.” When Norway, for example, took the medal-count lead in the 1952 Winter Olympics, one headline in Oslo read, “Norway leads; Swedes tied with Fiji.” The rivalry, however, hasn’t always been gentle. The Vikings held cruel sway for centuries over that cold-blue region, and the Germans have not forgotten Gustavus Adolphus, “The Lion of the North,” and his blond avengers. Almost four hundred years after the Swedes withdrew from what is today Germany, descendants of the Angles and Saxons still use “something the Swedes left behind” for a worthless leftover. It seems the retreating Swedes in the 17th century like the Russians in the 20th left nothing but the cobblestones.

Today, peace-loving but irritated Swedes may use the phrase “surly as a Finn” to personalize their criticism. To the east, the Russians refer to Finland (“fen-land”) as “the devil’s country” because they’ve never conquered those stubborn fens and the hardy folk who live there. To the west, the Swedes might joke that a Finn with 20 girlfriends is a reindeer herder. Healthy Swedes still refer to rickets as the English disease, and the porn-loving Danes claim syphilis is the “French disease.” Finally, a Norwegian might tell an absent-minded colleague, “Don’t make a Swede of yourself,” meaning, “Don’t be late.” Ironically, when Germans refer to a missed date, they call it a “Swedish appointment.”

Dueling stereotypes are dangerous because very often they are inaccurate. After Donald Trump’s grandfather immigrated to America in 1885, his children were so ashamed of their German heritage, they claimed to be from Sweden. Likewise, one of their sons, currently the US President, openly prefers the blue-eyed, blond immigrants from Nordic regions. But the stereotype of “big Finns” (burly woodcutters) using “Norwegian steam” (muscle power) wielding “Swedish fiddles” (crosscut saws) is mild compared to the stamps we’ve placed on African Americans and the Jews.

III. “Necessity teaches a naked woman how to spin.”—Nordic proverb

For reasons of my own, when I think of the Swedes, when I put aside the fact that they gave the Nobel Prize for Literature to Bob Dylan, I think of meatballs, nightingales, massages, smorgasbords, and Volvos. I won’t soon forget entering a friend’s Volvo on a snowy night in Germany. Before we’d gone two city blocks, my wife in the backseat was asking the driver to turn the heater down. Another friend owes his life to various safety features that were standard equipment on the Volvo he’d totaled in 1978. But when the writer Bill Bryson thinks of the Swedes, he thinks suicide is their “national sport.” It’s a common misunderstanding that I have heard much of my life. Recent statistics (WHO, 2016), however, reveal that Guyana leads the world with 30.2 suicides per 100,000; Russia comes in at third with 26.5 per 100,000, and Sweden is 51st with 11.7 per 100,000. Norway (74th) and Denmark (89th) follow their neighbor at 10.1 and 9.2 per 100,000, respectively. Though homogenous Japan has surpassed the average life expectancy of slowly diversifying Sweden in recent years, all Scandinavians can expect to live over 81 years. Thus, socialized medicine appears to be working on the macro-scale despite American claims it isn’t. 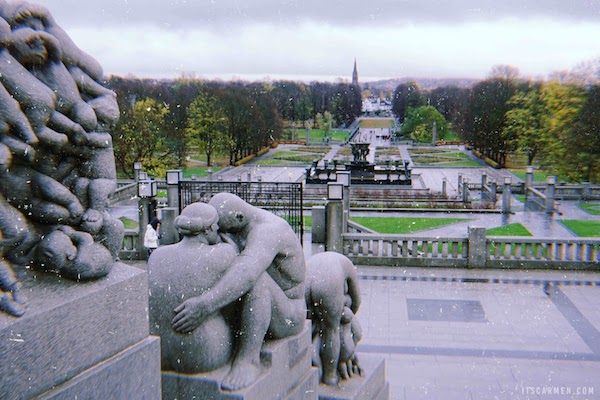 IV. “There’s something rotten in the state of Denmark.”—Shakespeare

Clearly Shakespeare never had a Danish pastry, relaxed on some Danish-modern furniture, laid Lego bricks, or crossed the magnificent ten-mile bridge-tunnel complex that now links Sweden and Denmark. Possibly influenced by his Danish wife, the American writer Garrison Keillor dubbed Denmark, “The Most Nearly Perfect Nation.” A few examples of this perfection drawn from World War Two must suffice: four million Danes went to bed on April 8, 1940, and though they were occupied when the sun came up, no lives had been lost in what would have been a futile resistance. But that’s when it gets interesting. When the Nazis ordered all Danish Jews to wear a yellow star, most Danes wore them, including King Christian. Meanwhile, hundreds of Danes were smuggling thousands of Jews into neutral Sweden.

In 2000, to acknowledge their insularity and to “disarm people of their prejudices,” Danes began a unique experiment among the world’s lending libraries. Today, if a Dane wishes to know something about Sri Lanka, for example, before traveling to Columbo on Lego business, he or she may consult a librarian in Copenhagen’s Living Library and select a local Sri Lankan, who has volunteered to be “checked out” and taken to coffee.

The egalitarianism of the Danes even extends to their judicial system. Speeding fines, for example, are scaled to the speeder’s annual income, but the richest Dane will not have to pay more than $98 for his/her first offense. The richest Finn, however, will pay thousands. 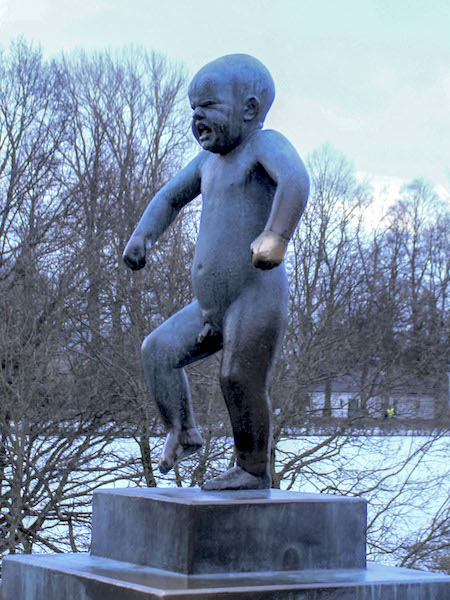 V. “Too clean has no taste.”—Nordic Proverb

When I heard a British neighbor refer to her foyer as her “mudroom,” I soon adopted the term for our tiled entrance. Likewise, when the Vikings (“fjord-men” or “sailors”) and the Normans (“north-men”) invaded England in 793 and 1066 respectively, their strange tongues were partly comprehensible to speakers of Old English thanks to their common Germanic root. Soon, coarse-grained words like skin and sky, scrub and scrape, snub and snare, muck and freckle, and ransack and knife (pronounced with two syllables) merged with Old English to produce Middle English. I like to think that when saunas became more affordable and the Nordic mouth finally relaxed, Nordic speakers had longer, more complex words to offer the world: words like quisling, ombudsman, slalom, and the charming fartlek.

VI. “Fewer have too much, and fewer still have too little.” —Nordic proverb

“Ask not what you can do for your country. Ask what’s for lunch.”—Orson Welles

Vermont’s Senator Bernie Sanders has often said that America would be better off if it looked more like Scandinavia. He and other progressives admire the Nordic free-market economies, their strong trade unions, and their gender equality. Sanders and his supporters think that Americans would be wise to darn the gaping holes in our “safety sock.” He’s not a communist looking to privatize American industry, but, as a Social Democrat, he has proposed Medicare for all, raising the minimum wage, heavily taxing the wealthiest, offering free education at all levels, and forgiving student debt. His supporters point out that the World Happiness Report ranked the Finns as the happiest people on the globe in 2017 and 2018. In 2018, the Organization for Economic Cooperation and Development ranked the Finns first in “life satisfaction” followed closely by the Norwegians, Danes, and Icelanders even after returning over 45 percent of their income to the government and paying a 25 percent sales tax at the grocery. Apparently, those burdens are offset by a 37-hour work week and six weeks of paid annual vacation among other benefits.

I’m old enough to remember Barry Goldwater and Ronald Reagan attacking Presidents Kennedy and Johnson for the “socialism” inherent in their views of Social Security, Medicare, and most forms of welfare. But I also recall Republican Senator John McCain saying, “When you reach a certain level of comfort, there’s nothing wrong with paying somewhat more.” I’m not an economist, but I doubt that the “dismal scientists” will ever agree on how much “somewhat more” properly means. Nevertheless, let me offer a rough estimate: when in 2018, Harper’s reported that in 99 percent of US counties, the daily food-stamp allotment did not cover the cost of three meals, this was not enough. And when the elderly well-to-do in Denmark receive free maid service at the taxpayer’s expense, this is too much.

George Lakey, Quaker economist and author of Viking Economics: How the Scandinavians Got It Right, and How We Can, Too (2016), has argued that, “Americans imagine that ‘welfare state’ means the US welfare system on steroids. The Nordics scrapped their American-style welfare system at least 60 years ago, and substituted ‘universal services,’ which means everyone—rich and poor—gets free higher education, free medical services, free eldercare. Universal totally beats the means-testing characteristic of their dreadful old welfare system that they discarded and that the United States still has. So, properly speaking, in the US context, the Nordics should be regarded not as ‘welfare states’ but as ‘universal services states.’ Nobody has gotten rid of poverty through charity, philanthropy and welfare, whereas poverty can be abolished through universal services.” However, when wealthy Danes can look forward to free maid service in retirement, I wonder where the incentive to be frugal is. As far as ‘universal services’ abolishing poverty, just Google <images Scandinavian poverty>.

To educate myself when teaching American Transcendentalism, I read about various socialist and communal-living experiments from East Germany to the Israeli kibbutzim and the Nordic “nanny states” in between. All these experiments were initially successful but ultimately failed as the membership grew larger and more diverse. For it seems that when all the communards are poor, like-minded, and striving to feed themselves, the commune works fine, but as it grows more prosperous, the veterans tire of sharing their pocketknife with the inevitable parasites, and they go off to whittle in comfort and solitude.