Grieving in Advance: The Sixth Extinction

Posted by Elizabeth Boleman-Herring on December 6, 2015 |

“I have asked, I have begged, all of you to read Elizabeth Kolbert’s book so that at least we will be on the same page. We are on the same planet and if you, as I, are able to read critically and take on board even the most ‘inconvenient truths,’ you should, you must now investigate, along with me, what is coming for your grandchildren’s generation. Otherwise, truly, we no longer have anything to say to one another.”—By Elizabeth Boleman-Herring 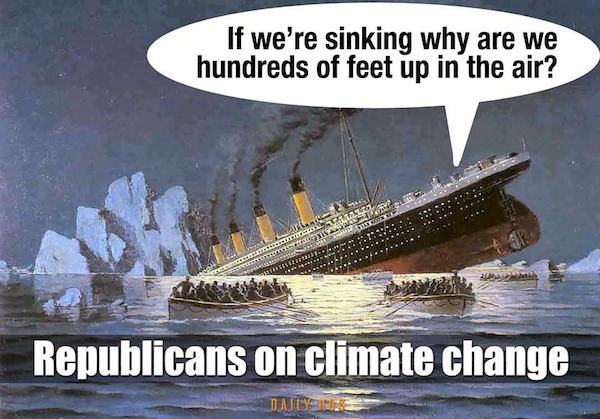 On the stern deck, grieving in advance.

“We are the first generation to feel the impact of climate change and the last generation that can do something about it.”―Governor Jay Inslee

“Right now, in the amazing moment that to us counts as the present, we are deciding, without quite meaning to, which evolutionary pathways will remain open and which will forever be closed. No other creature has ever managed this and it will, unfortunately, be our most enduring legacy.”―Elizabeth Kolbert

“We are now faced with the fact that tomorrow is today. We are confronted with the fierce urgency of now. In this unfolding conundrum of life and history, there is such a thing as being too late.” ―Dr. Martin Luther King, Jr.

PETIT TRIANON Florida—(Weekly Hubris)—12/7/2015—Usually, grief follows loss, and I know of no fellow adult who, by late middle life, has escaped grief and mourning.

Over the course of a human lifetime, we all lose friends, we lose parents (my own died so early), siblings, children, even pregnancies (and that last loss, which I have suffered, myself, is one of the most private, the least shareable, of griefs).

But, in 2014, after reading Pultizer-Prize-winning science writer Elizabeth Kolbert’s The Sixth Extinction: An Unnatural History, I was compelled—once I had taken on board the science and then read widely in the field of climate change—to grieve in advance for my entire species.

Yes, over the course of the year my mother’s Stage Four cancer took her life, it is true I grieved her death in advance. After my father’s stroke, I grieved in advance for three long days, until he was removed from life support. That “grieving in advance” is a torment vouchsafed to most of us now and, even if we stand by as those we love most suffer and die in medically predictable ways, heretofore our losses have been of individuals. We have had the consolation of believing that our species, which some of us persist in hoping is worthy of redemption, would continue, though individuals might, must, die.

We would all die, one by one, beloved and mourned, but homo sapiens would prevail. The species that produced Gandhi and Rumi and Mozart and Shakespeare and President Jimmy Carter would prevail.

I now know that this is not going to be the case.

And knowing that this is no longer the case has cast me into an outer darkness from which I cannot find a way back to anything resembling hope as I once knew it; the hope that some of you, my readers, still cleave to.

If a consensus of the world’s scientists, speaking from all the disciplines, is correct, The Sixth Extinction, occurring during the Anthropocene Epoch, is already well upon us.

I have asked, I have begged, all of you to read Elizabeth Kolbert’s book so that at least we will be on the same page. We are on the same planet and if you, as I, are able to read critically and take on board even the most “inconvenient truths,” you should, you must now investigate, along with me, what is coming for your grandchildren’s generation.

Otherwise, truly, we no longer have anything to say to one another.

If, at Auschwitz, those condemned to die had not borne witness for one another, to one another’s shared suffering, keeping faith with one another until those last moments in “the showers,” the Mozarts and Gandhis and Carters amongst us have truly lived in vain.

We stand together on “the commons,” and the end, for us, though not the planet, is quite near.

I would hazard that, once the bow of The Titanic sank and the great ship stood on its head, so to speak, with its stern in the air, no one on board imagined passengers on the stern end of the ship would suffer a different fate than those already in the water. The passengers, though scrambling for rafts, knew their destiny was a common one.

How is it, I ask myself, that my first cousin, Darwin Professor of Evolution (UFL, Jacksonville), and I can walk the sands of New Smyrna Beach discussing the eminent demise of our species, but no one else in my extended family, and precious few among my closest friends, is willing to face this incontrovertible music?

Many of my cousins are, in fact, looking forward to the so-called “end times,” the utterly impossible “second coming” of a long-dead Jewish rabbi from Nazareth, and the so-called “Rapture.”

I, on the other hand, am looking down the double barrels of climate change, and at the extinction of homo sapiens by some time about two-thirds of the way through the 21st century. Before that time—think Aleppo, Syria, but on a massive scale—life for mankind will have waxed ever more brutish and short, but I will not be around to grieve . . . in real time.

No, I grieve in advance.

I grieve in advance and seek more and more information. If I am forced to stand on the stern of The Titanic because homo sapiens’ shared genetic material made of our species a destroyer of planets, I will at least keep my eyes open for the duration, and make every attempt to make life better, in the short run, for anyone I can.

And I will bear conscious witness, even as we sink. Which is what I also ask of you.

“‘The Sixth Extinction’ Looks at Human Impact on the Environment,” by Claudia Dreifus, The New York Times, February 10, 2014.

“Rats as big as sheep? The Anthropocene is no laughing matter,” by Henry Nicholls, TheGuardian.com, February 16, 2014.

“Without a Trace: ‘The Sixth Extinction,’ by Elizabeth Kolbert,” by Al Gore, The New York Times Book Review, February 10, 2014.

9 Responses to Grieving in Advance: The Sixth Extinction