“Back in the late 1970s, I landed what seemed the perfect job for one who likes himself better when hanging out with wild things in wild places than when with others of his own species. That wildlife inventory work took me into remote corners of Jasper National Park, alone, for days on end. More often than not, when I climbed out of my tent or stepped out of a patrol cabin into the pre-dawn shadows to begin another day of field work, there would be a hermit thrush singing somewhere in the cool secret places beneath the trees. And late in the evening, as mystery spilled down from the peaks to darken the world, again there would be a hermit thrush, intoning its wistful benedictions into a stillness we shared.”—Kevin Van Tighem 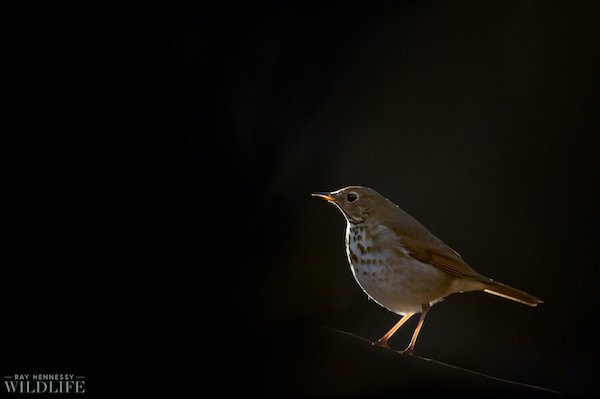 “. . . with thunder, rain and wind, then waiting,/we drop everything to listen as a/ hermit thrush distills its fragmentary,/hesitant, in the end/unbroken music. From what source (Beyond us, or/the wells within?) such links perceived arrive–/diminished sequences so uninsistingly–/not even human–there’s/hardly a vocabulary left to wonder, uncertain/as we are of so much in this existence, this/
botched, cumbersome, much-mended,/not unsatisfactory thing.”―Amy Clampitt, from “The Hermit Thrush”

CANMORE, ALBERTA Canada—(Weekly Hubris)—1 August 2022—Perhaps it’s just natural that a lifelong loner should have an affinity to hermit thrushes. We share a common habitat, after all—that of solitude. But that’s too facile an explanation; my love for those birds is more nuanced than that. Whatever the case, when Gail and I arrived in the timberline forest near the head of a subalpine basin the other day and stopped, as one, to listen again to the wistful beauty of a hermit thrush singing somewhere back in the dim, it evoked a host of memories and associations.

For those who aren’t loners, it might seem that those of us who are like to be alone. Not necessarily. Back in the late 1970s, I landed what seemed the perfect job for one who likes himself better when hanging out with wild things in wild places than when with others of his own species. That wildlife inventory work took me into remote corners of Jasper National Park, alone, for days on end. More often than not, when I climbed out of my tent or stepped out of a patrol cabin into the pre-dawn shadows to begin another day of field work, there would be a hermit thrush singing somewhere in the cool secret places beneath the trees. And late in the evening, as mystery spilled down from the peaks to darken the world, again there would be a hermit thrush, intoning its wistful benedictions into a stillness we shared.

The slow, ethereal flutings back in the woods seemed to speak of their own kind of loneliness, of nostalgic loss and poignant rememberings. I’m sure those birds sang for themselves, but it was a language I felt I almost understood, as I simultaneously savored my solitude and ached with loneliness. Strange days.

Years earlier, when I was religiously memorizing the first bird book I ever bought—the first edition of Birds of Alberta, by Salt and Wilk—I was taken by the authors’ description of the hermit thrush’s song: “Oh, heavenly heavenly . . . ah, holy holy . . .” I had yet to see my first thrush, but I was already haunted. It might have been that description that first made me equate a shy, brown bird with the parable of our exile from Eden.

Years later, when I was discovering the high trails in the Rockies, I sometimes backpacked with a book to read while resting. Tolkien’s Lord of the Rings trilogy was a particularly favored companion; when the larches turned gold or the meadows were brilliant with blooming glacier lilies it was easy to imagine that I was in Middle Earth. In fact, I was—because the tragedy of Middle Earth was the loss of magic from the world of men, but I was discovering the places where it lingers on. Jackson Browne sang of an earth wounded by “men who tried to forge her beauty into power” and that, to me, was the metaphor that linked the Christian story of The Fall to Tolkien’s fantasy novel: the deep human flaw that makes us all lonely strangers in a world of relations to whom we no longer relate.

Magic dies when one ceases to look at the living world with wonder and love, striving to hear its music and to understand how best to relate to the beings with whom we share our existence, and instead simply focus on their utility and how we might possess and use them.

What good is a hermit thrush? Wrong question.

In the story of The Fall, humans eat fruit reserved for God alone; from the tree of knowledge. But it’s not the knowledge that banishes us from Eden; it’s our reason for wanting that knowledge and the fact that it turns everything else into a mere object of analysis. We objectify the world to gain power over it and, in so doing, isolate ourselves from wonder, humility, and relationship. We make loners of ourselves, and wind up alone, on the wrong side of the gate that locked behind us when we stepped through it. To understand the parable of The Fall, the first thing is to know that it didn’t happen once upon a time; it happens every day, like a bad dream that keeps repeating.

In Tolkien’s trilogy, the elves are the ones who love song and mystery, and live in a world infused by magic. “A Elbereth Gilthoniel!” they sing in celebration of a time when all was magic. But at the end, they sail away into the West, taking their magic with them and leaving the world to men. It’s the same story, really.

But I know that the memory of magic, at least, lives on. It lives in newborn creeks that bubble out of flower-strewn meadows and tumble through forests of larch and fir; it lives among the peaks, especially when they are wrapped in storm clouds or caught in the last rays of the sun; it is in the woods, the fens, the wind, and the wild things. There’s a dark magic in the eyes of a grizzly bear when it stands to study a startled hiker, and a bright magic in the way warblers flicker through the willows. Mayflies dance in magic sunbeams. When life emerges out of winter’s icy stillness, that’s magic. When trees crack with the cold and ravens hunch themselves against the hard winter wind, that’s magic, too. It’s everywhere; it’s just hard to see it through the eyes of exiles.

I wonder if hermit thrushes remember the elves? I wonder if they are actually birds of Eden, and that the half-light in which they prefer to sing is that place that lies between the lonely, lost world of humankind and the magic we turned away from? Perhaps when Tolkien’s elves sailed away into the West and left only the memory of magic behind, they also left a humble brown bird to keep that memory alive in sweet, forlorn laments that make mountain shadows sacred.

Hermit thrushes are heard far more often than they are seen. Their achingly sweet, spiraling song, perhaps, is the music that arises from memories of memories of mystery—but they are part of the magic that lives on, too. Back in the sweet, subalpine shadows of forests, small brown birds lament the loss of wonder even as they invite us back into its embrace.

I’ve come to the certain belief that there is no time better spent than that spent listening to the hermit thrushes who sing to us from the edge of Eden, reminding us to remember what most of us don’t even realize we’ve forgotten. “A Elbereth Gilthoniel!” “Heavenly . . . heavenly . . .  holy . . .  humbly . . .  home.”

Editor’s Note of Thanks: I drew much inspiration while editing Van Tighem’s essay above also from a piece by Jack Gedney, Nature in Novato author, co-owner of Wild Birds Unlimited in Novato, and author of The Private Lives of Public Birds: Learning to Listen to Birds Where We Live.

Kevin Van Tighem, a former superintendent of Banff National Park, has written more than 200 articles, stories, and essays on conservation and wildlife which have garnered him many awards, including Western Magazine awards, Outdoor Writers of Canada book and magazine awards, and the Journey Award for Fiction. He is the author of Bears Without Fear, The Homeward Wolf, Heart Waters: Sources of the Bow River, Our Place: Changing the Nature of Alberta, and Wild Roses Are Worth It: Alberta Reconsidered. Van Tighem was born and reared in Calgary, his family roots in what is now Alberta going back to 1875. He graduated with a degree in plant ecology from the University of Calgary in 1977 and went on to work as a biologist with the Canadian Wildlife Service. In 1985, Van Tighem joined Parks Canada and subsequently worked in various national parks before retiring as a park superintendent in 2011. Van Tighem is the author of 14 books on wildlife and conservation, and writes a regular column, “This Land,” in Alberta Views: The Magazine for Engaged Citizens. He lives with his wife, Gail, in Cowley, Alberta. Read more about the author here. Find Van Tighem’s books here. (Author Head Shot Augment: René Laanen.)
View all posts by Kevin Van Tighem →
This entry was posted in Uncategorized. Bookmark the permalink. Follow any comments here with the RSS feed for this post. Both comments and trackbacks are currently closed.