Above & Beyond the Lectionary (Micah 2) 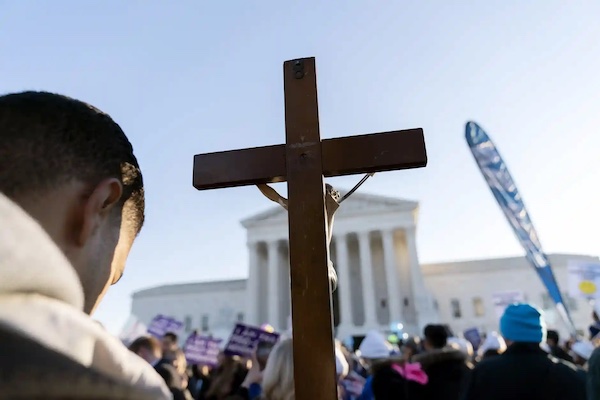 PENDLETON South Carolina—(Weekly Hubris)—1 July 2022—Those of you who know me well, or who are familiar with my preaching, know that I am fairly disciplined when it comes to following the Lectionary: scriptural texts which have been assigned for each Sunday in the Church calendar.

All this week, however, given current events, I have struggled to find meaning in the designated readings.

Theologian Karl Barth urged ministers of the Word to preach holding the Bible in one hand and the newspaper in the other. The headlines of newspapers this week, the accounts filed by reporters on the scene across America, the reports from those in the streets, and the things I have seen with my own eyes have all prompted me to put aside the Lectionary.

As I have pondered and prayed about what to say on this day, the words of the prophet Micah came back to me.

Micah, who is considered one of the twelve minor prophets, was from a small, rural town southwest of Judah. His words, often harsh, rebuked the people of his time for their dishonesty and idolatry. His message was directed squarely at Jerusalem, his people’s “capital city,” denouncing social evil, calling out fraudulence in the marketplace, and railing against corruption in government. Micah was the first prophet to predict the downfall of Jerusalem.

In Micah, Chapter 2, the prophet begins:

Alas for those who devise wickedness
and evil deeds on their beds!
When the morning dawns, they perform it,
because it is in their power.

They covet fields, and seize them;
houses, and take them away;
they oppress householder and house,
people and their inheritance.

What I heard and read this past week as I listened to the men who currently call themselves “Justices,” Justices of our Supreme Court, has been nothing short of wicked, evil, and oppressive.

I know what it is to have sacred texts used as the grounds for white men to interrupt me, ignore me, silence me, and pass off my intellectual property as their own. I know what it is to have the Holy Bible literally brandished against me and I, along with the many others who have been marginalized, bear the indelible marks of abuse, of violence, on my soul.

When Trump held up that Bible—upside down—in Lafayette Square back in June of 2020, so much darkness echoed in my heart; so much evil was unleashed and ramped up in our nation. And this June, when the New-Right “Justices” of the current, Republican-packed Supreme Court voted to strip American women of rights vouchsafed for generations, the wickedness devised in the misogynist and racist hearts of America’s fascist-evangelical fringe finally prevailed in the land. 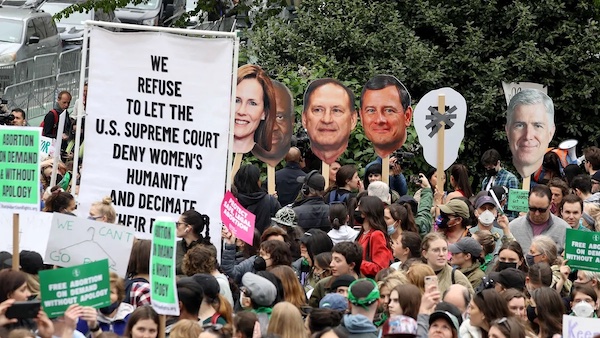 As journalist Katherine Stewart writes in a June 2022 Op/Ed piece in “The Guardian,” following the Court’s ruling in Dobbs v Jackson Women’s Health Organization, “This supreme court has already made clear how swiftly our Christian nationalist judiciary will change the law to suit this vision of a society ruled by a reactionary elite, a society with a preferred religion and a prescribed code of sexual behavior, all backed by the coercive power of the state. The idea that they will stop with overturning Roe v Wade is a delusion.”

Micah’s words are harsh and yet poignant. Those he rebukes caution him against calling out evil. They would prefer he hold his peace: “One should not preach of such things; disgrace will not overtake us.” Micah responds in no uncertain terms. He is not afraid to preach, and sets an example for all the minor prophets of the year 2022: “Should this be said? Is the Lord’s patience exhausted? Are these God’s doings? Do not my words do good to one who walks uprightly? But you rise up against my people; as an enemy you strip the robe from the peaceful; from those who pass by trustingly with no thought of war.”

As a member of the LGBTQ community, I recognize the month of June as “Pride Month.”  Many regard this as a time for parades and parties but “Pride,” for LGBTQ folks, has always been about rebellion and protest; about calling out evil. 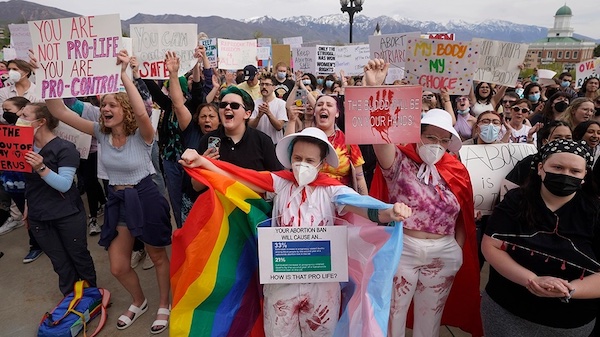 In an article in the publication “Them,” posted on June 1, 2020, journalist and activist George M. Johnson writes about the roots of Pride:

“On the night of June 28, 1969, history was made at a bar in Greenwich Village, New York called the Stonewall Inn.  It was on that night during a police raid that LGBTQ+ people led their first major action against the NYPD and their discriminatory practices towards queer people. During that raid, a biracial butch lesbian by the name of Stormé DeLarverie resisted arrest, screaming out to others there, ‘Why don’t you guys do something?’ It was in that moment that the only response to violence could be violence—the only language the police and state have ever spoken. The surrounding crowd then began to rise up, and the Stonewall uprising was born.

“Led by Black and Brown trans and queer folks, the rebellion that followed lasted six days. There were protests, looting, and violent exchanges with the police the likes of which had never been seen during that era. Though the historical record of Stonewall is often debated, many credit Marsha P. Johnson, a Black transgender woman, with throwing the first brick at Stonewall, and DeLarverie with throwing the first punch. What’s clear is that Black and brown LGBTQ+ folks played an integral role in the uprising.

“Black LGBTQ+ folks have always been on the front lines; we have been organizers and involved in every facet of the movement for Black rights, as well as the rights of those with intersecting identities. We were there every night of Stonewall, every night of the Civil Rights movement, and there, now in midst of a national movement against the police state. As we remain the highest at risk of COVID-19, many of us have set that fear aside, outweighed by the need to once again fight against police brutality in a country built on anti-Blackness.”

Our hope lies in a movement grounded in intersectionality where we all work for the common good—for justice, mercy, and love. The prophet Micah concludes his words of judgement against the leadership structure with these hopeful and energizing words: “I will surely gather all of you, I will gather the survivors of Israel; I will set them together like sheep in a fold, like a flock in its pasture. It will resound with people.”

My beloved survivors, as our sacred and holy scripture, as The Church itself, is used as a photo op prop, as a weapon, as a stage set for denigration, let us hold tightly to the Word we know as truth. In that truth are words of both judgement and saving grace. 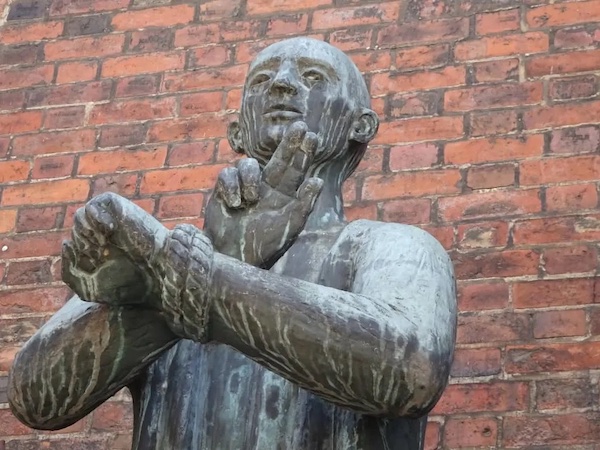 Bonhoeffer, hanged by the Nazis as The Nazi War came to a close, believed that we are faced with an inescapable dilemma when confronted with evil: we who call ourselves Christians have no other option but to oppose it directly. He asserts that there are only two guides for determining the will of God in any situation: first the need of one’s neighbor and, second, the model of Jesus of Nazareth.

The little men (and one woman) in The Marble Palace who have used the word of God to deny American women the right to the sovereignty of their own bodies, the civil right of deciding when and where and how and with whom they will bear their young, must be held accountable and called out for the evil they do in our great hall of justice.  As a people pledged to live by the Book, and followers of the rebellious brown man hanged on a cross, we must open our eyes, see the New Right for what it is—evil—and then act on our knowledge of and our commitment to the light.

Note Regarding Image 4 Above: “Since 1979, there has been a rather inconspicuous memorial in the choir of St. Petri Church for the theologian Dietrich Bonhoeffer, who was murdered in April 1945, in the Flossenbürg concentration camp, shortly before the end of World War. As an upstanding and pugnacious pastor, Bonhoeffer had defended himself under National Socialism as an advocate of the ‘Confessing Church,’ later joining the Resistance. In 1943, he was arrested by the Gestapo. The memorial was created by artist Fritz Fleer and depicts Bonhoeffer barefoot in prisoners’ clothing, his hands tied prior to his execution. The sculpture was donated by the publisher Axel Springer. When strolling along Mönckebergstraße, it is worth making a short detour to the Bonhoeffer monument at the foot of which fresh flowers left daily repeatedly prove that this courageous and straightforward man has not been forgotten.”

The Rev. Robin Kaye White grew up in a farming community in Central New York State: she is descended, on both sides of her family, from dairy farmers, and is most alive, still, in rural North American landscapes. A voice major, she studied Music at Ithaca College; then earned her MDiv at Lancaster Theological Seminary and did graduate work at Princeton Seminary and The Theological Institute of Advanced Theological Research in Jerusalem, Israel. Ordained in the Presbyterian Church (USA), White was recently a Co-Moderator of the National Board of More Light Presbyterians. White is passionate about liturgy—“the work of the people”—and preaching. In her sermons, she strives to illuminate the original context of scripture and tease out its messages for the fraught present. She has had the privilege of “holding space” for the dying and their loved ones and experiences this ministry of presence as a gift: she is most willing to go with people as they journey to desert places. She states: “I have lived my life by adhering to Paul’s words in his letter to the church at Rome, ‘Rejoice with those who rejoice and weep with those who weep.’” She is just as likely, though, to quote Rachel Held Evans as St. Paul: “This is what God’s kingdom is like: a bunch of outcasts and oddballs gathered at a table, not because they are rich or worthy or good, but because they are hungry, because they said yes. And there’s always room for more.” A Lesbian-Pescaterian-Presbyterian, Reverend White is most alive out of doors, whether hiking, biking, kayaking, golfing . . . or just sitting on a rock. (Banner and Author photos by E.B.-Herring, taken at Pendleton SC's Liberty Hall Bed & Breakfast.)
View all posts by Robin White →
This entry was posted in Uncategorized. Bookmark the permalink. Follow any comments here with the RSS feed for this post. Both comments and trackbacks are currently closed.

4 Responses to Above & Beyond the Lectionary (Micah 2)