In Praise of Johnny-One-Note

The right note for the last nearly four years has been housing. Its continued depression remains the economy’s albatross.

Until housing recovers, we won’t recover. 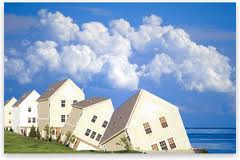 Until we recover, the world won’t recover.

Despite the over-publicized  pending agreement on a trivial amount of mortgage-principal forgiveness, the administration housing policy remains a failure.

Obama’s reliance for most of his term on voluntary bank remediation is almost indefensible.

“Intemperate,” scream the apologists. “The problem was too big to be solved by any president or even Congress.”

The housing crisis and the resulting recession were the handiwork of government. What government made, it could have unmade.

The excess borrowing that fueled the housing bubble, facilitated, encouraged and connived at by government, was a de facto shift in the distribution of national wealth.

Those who had an insignificant piece of the pie were given the transient illusion of having a more fulfilling piece.

The way out of this crisis is to make de jure what was de facto.

That can be done only by effecting a $700 billion transfer of funds from taxpayers to those whose total negative mortgage equity approximates that figure.

The sum would never have gotten so large had we acted promptly four years ago.

In fact, the costs would have been nugatory if we had done what was then being proposed—immediate re-mortgaging at current market values with lenders recouping part of losses, which would be recognized on a deferred basis, by sharing in any subsequent property appreciation.

(Of course, that appreciation would have already begun because quick action would have materially reduced the severity of the recession, thus blunting what became a self-feeding decline in housing values.)

But there was no stitch in time to save nine.

Now, those who are able must, in their own self-interest, subsidize those whose precarious balance sheets continue to crimp their spending and thus circumscribe the extent of the overall recovery.

There is something terribly ironic about Obama’s recent calls for equitable sharing of economic burdens.

The principle is unassailable, but the weight of the burdens has been greatly increased by the inaction of he who now urges their redistribution.

Yet de jure redistribution of a tiny portion of wealth via mortgage-principal forgiveness has finally pushed itself  near to the top of the agenda of even those who blinked it for so many years.

More substantial efforts of this type will not only will spur growth, they will palliate those class conflicts that presage chaotic violence.

One Response to In Praise of Johnny-One-Note