Is Tom There? Remembering My Brother

“‘Is Tom there?’ I can still hear my father mimicking the girls who used to call my teenage brother several times a day back in the mid-1940s. He would lift his own voice an octave or two and make it simper, rising at the end of the question.”—Diana Farr Louis 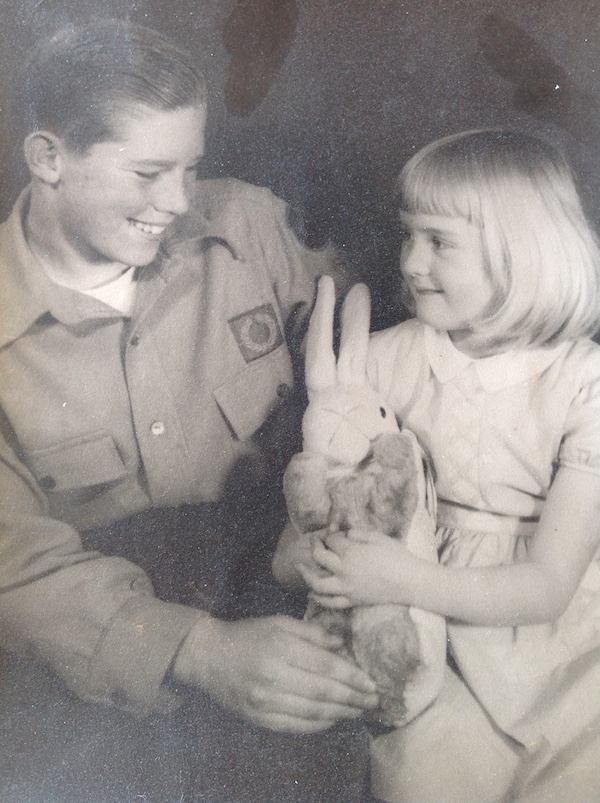 ATHENS Greece—(Weekly Hubris)—July 2018—“Is Tom there?” I can still hear my father mimicking the girls who used to call my teen-aged brother several times a day back in the mid-1940s. He would lift his own voice an octave or two and make it simper, rising at the end of the question.

My middle brother was popular with boys, too. Everyone loved him because he was funny and kind, nice-looking though not drop-dead gorgeous, with light brown hair and brown eyes; the only one of us four children with the eyes of our mother.

In November 1943, several months before she finally gave up her duel with cancer, she wrote poems about her life and about her children. Her ode to eleven-year-old Tom was titled “The Diplomat”:

Sociable, warm-hearted, true,
So our third likes friends about him
And his friends all love him, too.

With his bugle he’s Pied Piper.
Old and young can feel his spell.
With his charms he’s ever spinning

Unlike our older brother, Shelty, who was a loner and more at home on the range and in the Rocky Mountains than in the country clubs of Long Island, Tom was a people person. Whereas Shelty went straight to Wyoming to study Animal Husbandry in Laramie after The War and eventually bought his own farm (not big enough to be a ranch) near Cody, Tom was happy on the East Coast and followed in our father’s footsteps at Princeton and on Wall Street.

But with a difference. His career at Princeton was interrupted “after having miscalculated badly the extent of [his] knowledge of Astronomy,” which “led to a tour of duty with the US Army in Thule, Greenland, 90 miles from the North Pole.” But he did go back to graduate, and being his younger sister was bliss, for, in addition to local friends, he used to bring home more exotic classmates, all of whom were handsome and sexy and musical.

One of my fondest family institutions was the singsong on Sunday evenings when Tom was in residence. Both he and my father had pure tenor voices and there was always some friend who played the piano and others to make up the parts. But I was the only soprano, reveling in the fun, which often ended in an Italian restaurant on the other side of the tracks and my first tastes of scungilli and eggplant parmigiana.

My brother enjoyed life, sometimes a little too much. Drinking was one of his favorite sports. And sometimes, after a night out, our little sister, Priscilla, would find him slumbering on the kitchen floor, and have to nudge him awake before our father came downstairs. But when he woke up again much later on, he would rub his eyes and mumble something about “hangover horns.” At his (first) wedding, one of the toasts was to “the man who put the o in bull shot,” because he loved and may even have invented the drink made of Campbell’s beef bouillon (never consommé, which would jell up) and vodka, which we preferred to Bloody Mary’s.

Drinking was no deterrent to a career on Wall Street; instead it was probably an advantage. But Tom was not destined to join Farr & Company, our father’s sugar brokerage firm, despite having been groomed for it. Since 85 percent of Dad’s business was with Cuba, Fidel’s toppling of Batista in 1959 and his anti-American stance had a disastrous effect on commissions, so Tom joined a stock brokerage company instead, eventually buying a seat on the Stock Exchange.

Around that time, too, he met the girl next door (a new arrival) and they were married a year later. I’ll never forget that evening. Regis had just returned from a trip to the USSR and I watched my brother mesmerized, falling in love as she told her stories. They produced three boys in the space of four years and looked like a fairy-tale couple, moving into a mansion in Cedarhurst and storing our parents’ belongings in their garage as they downsized from 22 rooms to two over the course of four years, thanks to Castro.

By 1971, our parents had moved to Rapallo, and my own marriage had collapsed so, that summer, Tom and I decided to take our boys over to the Italian Riviera for a visit. Our stepmother found us an apartment where Yeats had once resided, and we spent more than a month hanging out with them, sailing, swimming, partying and even hiking on Mont Blanc and dining with an Italian cousin at Michelin-starred Le Père Bise in Annecy.

That taste of Italy, after so many summers in Greece, changed my life, convincing me it was time to abandon New York again; and so, leaving my son with my parents, I went back in September to pack up my apartment and four weeks later sailed to Genoa on the Pia Costa. Tom and Regis gave me a going-away lunch party at the 21 Club and that was the last I saw of her because, a year or two later, they split up, too. 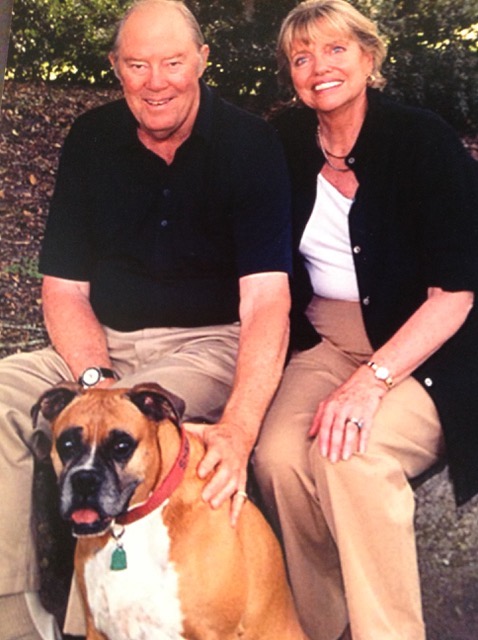 In fact, it would be another 13 years before I’d see my brother, either. But when we all finally met up in 1984, we both had new partners, the loves of our lives, and were happy again. Shortly afterwards, Tom and Terry, a dear friend we’d grown up with, moved to Beaufort, South Carolina, where several other Cedarhurst neighbors had fled. And there he blossomed. Always civic minded, he joined the Rotary Club, the local Episcopal church, and other organizations, and kept singing as co-founder of the Lowcountry Chorale.

Their home was the scene of many joyful family reunions, some of which I managed to attend from Greece. But in ‘98, Tom suffered a stroke that paralyzed his right side and, six months later, underwent a quintuple bypass. His recovery was complicated by diabetes—all the consequences of too much dolce vita.

But, although disabled, he never gave up. On one visit, he took me round Beaufort in his car and showed me the rehab clinic/gym, where he founded a group called Strokebusters to help fellow patients overcome their handicaps. Then we passed by the church where he asked the rector what else he could be doing to help the parish. He continued to be active in the Rotary Club, and served on a diabetes advisory committee at the local hospital. I kept comparing him in my mind to most of the Greeks I knew who, in the days before our economic crisis locked into place, never dreamed of community service. To me, Tom represented the best of Americans.

Of course, he wasn’t perfect. Whenever he had his weekly lunch with a group of retired Marine officers (Parris Island was next door), he’d wax very right-wing and once accused me of being “nothing but a liberal,” with a sneer in his voice. But that would pass quickly, and he would revert to his normal, affectionate fairly liberal self. 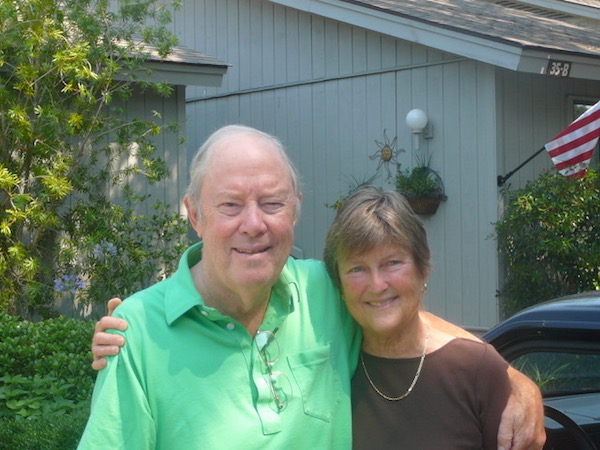 It’s interesting that our mother referred to his “thin, young arms with strength equal to a tight hug or fighter’s crimp” because, even with only one working arm, he was still an expert hugger. He’d pull me close, wrap his left arm around me, and grab the right to enclose me a terrific bear hug. And, obviously, it was the fighter’s crimp on life that kept him going, though increasingly disabled by diabetes, for another twelve years. The last thing he said to me on the phone, a couple of months before he died on June 21, 2010, was, “Don’t worry about me, Sis. I’m resolutely positive.”

That fighter’s crimp was aided and abetted by his wonderful wife, Terry. He often said that, without her, he never would have wished to go on.

When I asked my nephew, Ned Farr, what his father’s favorite food was, the answer came back in an instant: Yorkshire Pudding. It was a staple at our Sunday lunches (see “Tell Me What You Ate”) along with that delectable roast beef. And we all loved it, dripping with bloody juices. I doubt that I would relish it in the same way today, but if I could find a decent rib roast to go with it, I would certainly enjoy revisiting that lunch table. I leave making the perfect roast up to you, but here’s the pud.

In a bowl mix the first four ingredients together into a batter. Let rest for 30 minutes. Take your roast out of the oven, pour off about ¼ cup of the fat and juices into a Pyrex dish about 24 cm/8 inches in diameter. Put it in the oven, which you have turned up to full, and heat for 5 minutes. Remove and carefully add the batter.

Pop the Pyrex into the oven bake until the top is lightly browned; it should not take more than about 15-20 minutes.

Serve with the roast beef, which should have a lot of crispy on top and be carved nice and thin, and the juices from the meat. It goes without saying that you should have roast potatoes too.

And if you want to precede your Sunday lunch feast with a round of memorable Farr bullshots, here are the instructions. The hardest part is finding Campbell’s beef bouillon soup—it certainly doesn’t exist on supermarket shelves here in Greece. As I mentioned, consommé will not do unless you like slurping shivery blobs of jellied broth; the ice causes the thick liquid to do that very quickly. A recipe in “The Guardian” does not seem to note the distinction!

Pour the vodka in first so you don’t add too much, then add the ice and the other ingredients. Tastes best after a Sunday morning frisbee game or when sailing the Aegean in a meltemi [https://en.wikipedia.org/wiki/Etesian] and the wind is so cold that you have to huddle below decks.

6 Responses to Is Tom There? Remembering My Brother