Jam Session & A Tribute to My Father

“As my father was born on June 2, 1892, I never fail to think of him this month. A sugar broker who loved his job and the commodity, he would have been horrified by all the bad news surrounding sugar these days and he would have scorned all the substitutes. I don’t have much of a sweet tooth but, like all of his children, I will never forget him saying, after every meal, ‘A bit of sweet makes the meal complete.’ And since this is a month for making jams, too, I take this opportunity to remember him and the company he worked with and whose sugar I use.”—Diana Farr Louis 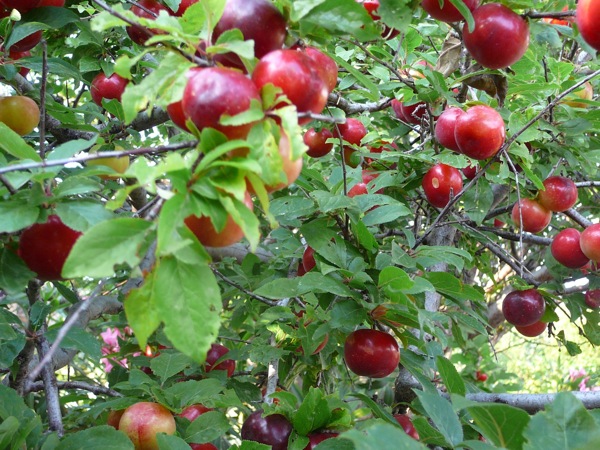 Every other year, our plum trees go berserk.

ANDROS, Greece—(Weekly Hubris)—June 2018—This year,* our plum trees have been working overtime. There are only two of them, thank God, but each has contributed hundreds of perfect wine-red fruit, brushed with undertones of pale yellow. These koromila, as they’re called in Greek, are the size of slightly flattened ping-pong balls. And they taste equally delicious by the handful or turned into jams, pies, chutneys, clafoutis, sorbets, or something exotic I haven’t come up with yet. Plum tapenade, anyone?

Mercifully, they did not ripen simultaneously, or my enthusiasm might have quailed by now. And friends have been most obliging. So, I am still happy to stand at the kitchen sink, pitting them raw for the freezer, or cooking for immediate use. Squelching through a pot of cooled, softened plums, hands and forearms gloppy with juice and bits of fruit, is as satisfying as decorating a dribble castle on the beach or patting oodles of mud pies.

Plus, I have the satisfaction of watching olive leaves shimmer in the breeze and butterflies flirt with the mauve flowers on our buddleia.

But I digress. Jam needs sugar and, as always, I’ve brought bags of Tate & Lyle jam sugar from Athens for the summer’s preserves. It has pectin added and so one needs only half the amount of both sugar and boiling for the jam to set. 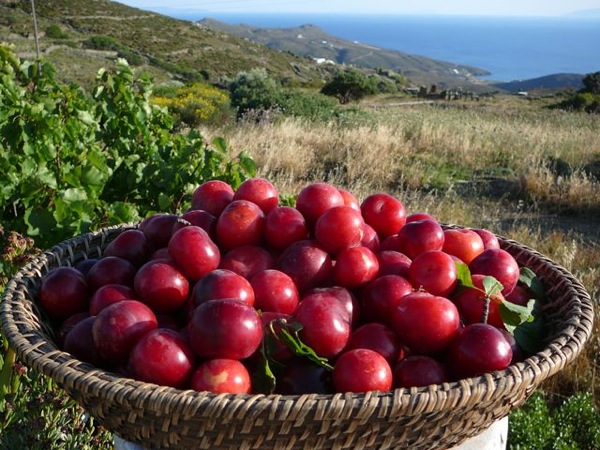 Just one of many baskets I’ve collected in the past week, at least one a day, and the tree still looks full.

But this year the bags come with a new slogan: “Tate & Lyle, Taste & Smile.” And, so I do. Thinking about sugar and the Farr family and my father’s connection with that venerable British firm.

I had the original sugar daddy. My pa, Francis Shelton Farr, was a sugar broker. After the First World War, he founded Farr and Company with an office on Wall Street, and he might have been happier there than at home, until his mid-70s, when he was forced to retire. He loved his job with a passion, and sometimes tried to instruct us on the superiority of cane to beet sugar, and of Cuban sugar over that of any other country. And every morning at 8 o’clock sharp, before he left the house to drive into the city, he’d receive a call from London about the market there.

I knew nothing about commodities transactions as a child, a condition that has barely changed. I had no idea about futures and market fluctuations, but greatly appreciated the end product: the life savers that lived in Dad’s pocket, the Hershey bars weighing a pound each he’d bring back from a visit to the factory in Pennsylvania, the ten-pound box of Whitman’s Samplers chocolates that would arrive each Christmas.

Most of all, I loved the box of pralines from New Orleans that also appeared at Christmas. It held eight of them, wrapped in individual envelopes, and we each had our own. I tried to make mine last and, never since, even in NOLA itself, have I ever found a praline that could compare with that superlative combination of melt-in-the-mouth sugar and glazed pecans.

Dad spoke in aphorisms, and one of the most common was, “A bit of sweet makes the meal complete.” Along with “Doubtless God could have made a better berry, doubtless God never did,” which came out every time we had strawberries, and “Never worry about the dealer or the carver,” a regular pronouncement when he sliced and served the Sunday roast. Among others.

Although we used to roll our eyes in despair every time we heard his sayings, all seven of us siblings have passed them on to our children and/or spouses. And although my sweet tooth rarely makes excessive demands, I do harbor cravings for just one square of dark chocolate, or two (or three) pieces of crystallized ginger after a typically Greek, dessert-free lunch.

Besides talking to London every weekday, Dad’s main business partners were in Havana. In the spring of ’56, he took three of us middle children there with our mother. My first trip to a foreign country, I was bowled over by the colors, smells, rhythms, noises, and warmth—of the people as well as the tropical climate. 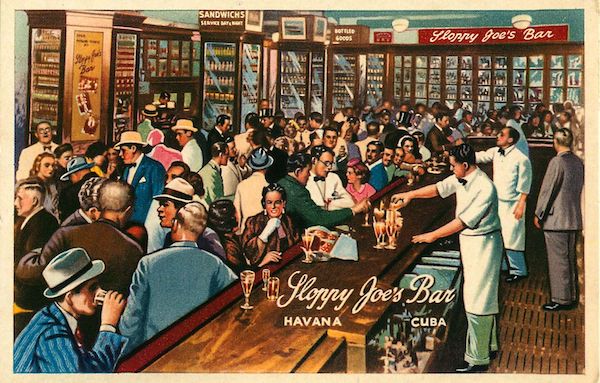 There I had my first daiquiri (at Sloppy Joe’s), played with my first slot machine and won a bucketful of nickels, washed my feet in my first bidet, and had my first sublime plate of spit-roasted piglet. At a restaurant on Varadero Beach, with Batista’s gin palace anchored offshore. An omen?

That summer or perhaps it was the next, my father sent me off to England—to stay with dear friends from Tate & Lyle. Tony and Brenda W-S and their four children were just as welcoming as the Cubans, though I remember shivering next to the electric heater in Surrey in July. But we certainly never ate anything as spectacular as that piglet. Instead, we indulged in a daily parade of meals: copious breakfasts followed by elevenses followed by lunch, then tea with sandwiches in the garden and finally supper.

During that month I made my first acquaintance with a “fearsome zucchini “—a humongous marrow boiled to mush and awash in its own insipid juices. But my dear hosts also supplied such novelties as gooseberry fool, summer pudding with raspberries and black currants, and steak and kidney pie. And we worked up vast appetites playing tennis and watching a two-day cricket match at Lord’s—nothing like boredom to make you ravenous.

But giant squash and cricket aside, I adored being part of the family and returned to Long Island an ardent anglophile with what I thought was a British accent.

I did not see Tony and Brenda again until about ten years later when they came to New York. By then my father’s firm was facing bankruptcy. Although Fidel had embraced the US at first and even used Farr & Co as a base in NY, his revolution and the subsequent embargo on Cuban products slowly ravaged my father’s business. They tried to diversify, develop more contacts with other sugar sources, but the debts piled up.

On the eve of their visit, my father suffered the worst indignity. His partners, sons of the original co-founders, gave him two weeks’ notice. He would have to retire and without a pension. Knowing I was to have lunch with Tony and Brenda the next day, he swore me to secrecy. I was on no account to reveal this humiliating turn of events.

I broke my promise and told them all. Shared my fury at this shabby treatment of my 76-year-old father. They were horrified.

It may have been the best thing I ever did.

On their return to London, Tony arranged with his bosses for my father to receive a full pension from Tate & Lyle—in recognition of his decades of devoted and honorable association with them. It was an offer he couldn’t refuse, and their generosity kept him and my mother comfortable for the rest of his life.

Tate & Lyle. Taste & Smile. I always do. Through my tears. Thank you again. 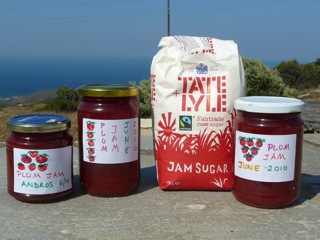 A new excellent resource for food lovers is Edward Behr’s Art of Eating Cookbook, Essential Recipes from the First 25 Years.** When I was looking for a recipe for granita that would be something more than crystallized fruit juice so hard you need an ice pick to eat it, I found inspiration in his recipe for “slushy firm” Melon Ice. I think almost any fruit could be used.

Boil the sugar and water together, stirring to dissolve the sugar. Set the syrup aside to cool, and then chill it completely in the refrigerator.

Prepare the fruit. (If melon, you want 2 compressed cups/500 ml of flesh.) I think I had a bit more, wasn’t too precise. Puree the fruit in a blender or food processor. Combine the puree with the chilled sugar syrup and wine in a shallow bowl, and then chill deeply in the refrigerator, at least 1 hour, followed by 5 to 10 minutes in the freezer.

Break up the ice crystals thoroughly every 20 minutes or so (this will depend on your freezer/type of fruit) with a fork, until the liquid has turned into a firm slush of fine crystals. If you don’t serve the ice immediately, store it in the freezer. About half an hour before you intend to serve it, take it out of the freezer and place it in the refrigerator to soften.

My plum granita was sublime, so much so that I’ve frozen bags and bagsful of pitted plums for future delectation.

*The Art of Eating Cookbook contains recipes from the first 25 years of Edward Behr’s beautiful quarterly magazine dedicated to wonderful, authentic foods and wines and the people who produce them. It was printed in 2011 by the University of California Press, Berkeley, Los Angeles, London.

*I wrote this column in 2010, when the plum trees were in munificent mode. Sadly, one died last year, and the second is on its last branches, both victims of the oozing disease that afflicts many fruit trees, and almonds, with pits. We lost a fantastic apricot tree to the same disease. So, this column really is a visit to the past, but I’m still making jams from delicious farmers’ market strawberries and apricots.

3 Responses to Jam Session & A Tribute to My Father