Posted by Elizabeth Boleman-Herring on November 30, 2017 |

“Mademoiselle—I never knew her last name—was a Romanian refugee, a member of the royal family and, we were told, a princess. There were many royals in Romania until the last king, Michael, was deposed in 1947, and the rest of the Romanian Hohenzollern-Sigmaringens scattered throughout Europe and into exile. Marie had become, in one fell swoop, a woman without a country, doomed to labor among the children of the next great super power. Hers was not an enviable position. I think now what I might have learned from her, and my throat catches.”—Elizabeth Boleman-Herring 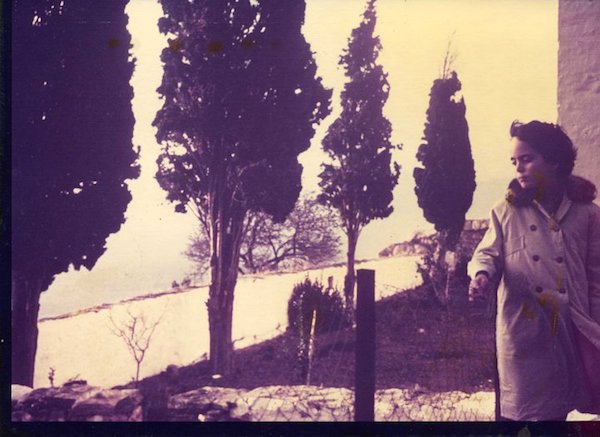 “Oh, life is a glorious cycle of song,/a medley of extemporanea./And love is a thing that can never go wrong,/and I am Marie of Romania.”—Dorothy Parker, Enough Rope

LIMBEAU Florida—(Weekly Hubris)—December 2017—I never did succeed in learning French. My mother, who had emerged, running and only half-fledged, from rural, Depression-era South Carolina into Pasadena’s high, mid-century, Bridge-playing, hat-and-gloves-wearing, and fund-raising society, had high aspirations for her only daughter: I would speak French from childhood, play piano and tennis, study ballet, sing in Presbyterian choirs, dive and swim (she had never let go her own, learned-early fear of the creek).

My poor, dear mother! What she did not count on was an intractable child who cleaved to English, and only English, like a limpet (after half a century in and out of Greece, my Greek is even abysmal), hated tennis, refused to go on the stage, and rose on toe precisely once. I do swim; I did sing, throughout childhood; and I played cards (though never Bridge) for a couple of summers, in Athens, during my 30s.

But anyone who hears me speak even a few words of French regrets asking me to parler.

In Paris, in the mid-1970s, I embarked upon my first sojourn as a mute due to lack of a common language.

In a café one morning, as I sat with coffee and croissants at the bar, a moustachioed young man attempted to engage me in conversation. From his truly tragic French, I knew at once he was a fellow-sufferer. Eventually, struggling to remember some simple French phrase, I swore, briefly, in Greek, and my interlocutor threw himself into my arms: he was, of course, an Athenian, and we happily chatted through a long breakfast, en grec, vous et tu be damned.

Also in the 70s, on board a ferry bound from Piraeus to Mykonos, painter Genevieve Couteau and I—she French; I, whatever I am after all my peregrinations—spoke for hours in Greek, she embarrassed by her halting English; me, paralyzed en français. I found her Greek utterly charming, as only French-inflected Greek can be, spoken by women of a certain age.

I do not speak French for lack of my mother’s steely resolve, however. It took her 30 long years to despair of me. But Mademoiselle Marie knew, I think, the day she and I met that Mother’s cause was lost. 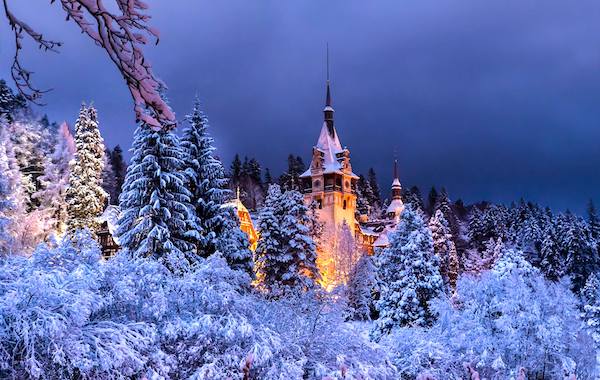 Mlle. Marie, by the time I knew her, in the early 1960s, in Athens, was elderly. Extrapolating now, with the help of Wikipedia, I believe she must have come to Greece some 15 years before my father arrived in Athens as a Fulbright scholar, and my mother engaged her to tutor their daughter in French, her own first language.

Mademoiselle—I never knew her last name—was a Romanian refugee, a member of the royal family and, we were given to understand, a princess. There were many, many royals in Romania until the last king, Michael, was deposed in 1947; then, the Romanian Hohenzollern-Sigmaringens scattered throughout Europe and into exile. Marie became, in one fell swoop, a woman without a country, doomed to labor among the children of the next great super power. Hers was not an enviable position. I think now what I might have learned from her, and my throat catches.

My tutor was small and slight, and wore seemingly always the same tweed suit and hand-washed silk blouse. I recall no jewelry; no ornaments of any kind. Marie could not have been more invisible; more still; more closed in upon herself.

We were the same height and size, though I was only ten and eleven when I knew her. And, while she taught me—a year or so—my parents would serve tea and biscuits, and then leave us alone together. My father collected Mlle. Marie, and then drove her home, once a week. I cannot imagine what those drives must have been like for either of them: my father spoke only English, and Marie’s Greek was minimal.

In Athens, in the 1960s, French was still widely spoken, and comprised the country’s strong second language. English and German would supplant it over the course of the next decade; but for all my very elderly now Athenian friends, French is still the language of the arts, diplomacy, and the heart.

You may ask what a child born in mid-century (the last one), in the United States, and brought up for the first (and last unconscious) part of her life in California knows of exile?

What I know of it I first learned from Mlle. Marie and from Marina, our Smyrna-born Greek housemaid.

Both women lived in refugee hovels, and today I so wish my memory were clearer and I could say with certainty where those warrens of adobe dwellings were located, south of Athens’ city center. I remember them clearly, and remember wondering how such places existed within the bounds of a largely modern European capital.

Marina was with us daily, shopping for meat and vegetables in Athens’ main market, my father trundling behind her with a shopping cart. Possessed of appliances brought over on the ocean liner, and a car, we must have seemed impossibly wealthy to Marina, but none of us had the skills necessary for survival, even in urban Greece, in the early 60s. Knowing where and when to purchase foodstuffs—from artichokes to lamb to bread and coffee—required quite specialized knowledge. Marina served as guide, translator, nurse, babysitter, seamstress, and so much more.

In return, she was paid very well, driven home to her family every night, and went with us on day trips out of the city, often to visit her extended refugee family members outside Corinth. As our time in Greece wound down, my father filed papers for Marina, her husband and son, smoothing the way for the family to emigrate to Canada.

Mlle. Marie was not with us that long. It is ironic that, though she came to teach me French, the impression of her I retain is of long, self-imposed silence.

For decades, I kept the notebooks she bought me as gifts—this woman who taught embassy children that she might keep body and soul together—which were filled with my appalling dictées. With Marie, I remember no anxiety, no correction, no ridicule, though at school, in French class, I suffered several times a week under Madame Vrettos, who mocked my accent and succeeded, finally, in turning me against the entire mid-century process of French-language pedagogy.

As a freshman at the University of Georgia in 1967, I would take my final quarter of French, which, by that time, was taught via a language lab. With my memories of Madame Vrettos still fresh, it was too late for me and the language of European royalty.

Mlle. Marie, I believe, gave up on me on Day One, but we enjoyed one another’s largely silent company, and I know we must have escaped the cahiers and dictées often, for I remember clearly one winter afternoon spent with her atop the Acropolis.

At that early age, I was already writing poems quite as bad as my spoken French but, with poetry, I persevered.

My first short story, written when I was twelve, is about Mlle. Marie, and the Parthenon. 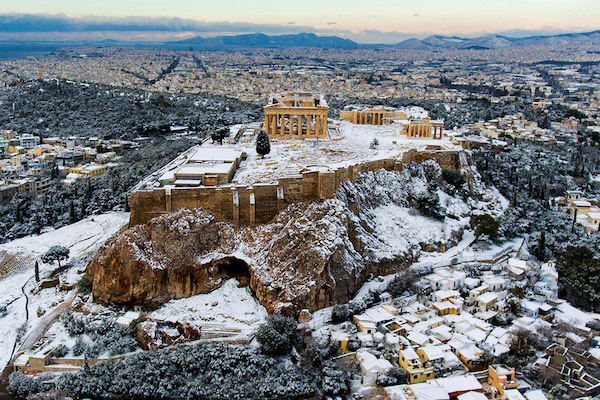 The Parthenon, under snow.

Both of us, bony little girl and fragile elderly woman, were always under-dressed. A “Fulbright child,” I came to Greece with a few clothes and shoes “bought ahead” in Pasadena, several sizes too large, and packed deep in our steamer trunks.

After weathering amoebic dysentery and rheumatic fever our first year in Athens, I finally began growing again, in a city without ready-to-wear. My mother’s clothes were cut down for me, but a coat was problematic. Mlle. Marie and I both were similarly waiflike for two winters; exiles without proper winter coats or adequate footwear. A late-in-our-stay trip to Italy and then, to Scandinavia, would equip me properly. But by that time, Marie was no longer my tutor, and my mother had—for the time being—given up on my learning French.

But, that one clear, bright day that I recall, up on the Acropolis, as Marie and I made our way throughout the great temple, and spoke, haltingly, as we did, about the 5th-century Greeks and their gods and goddesses, I had a fleeting fancy.

It occurred to me that she could do worse than materialize, in her golden splendor, atop her sacred rock, taking the form of a tiny, grey-haired Romanian princess; whispering, in the ear of a sickly, also exiled child: “I was once something very like a goddess.”

Marie, with her little gifts, her supportive presence, and her one good tweed, brought me a small, infinitely precious, and lasting lesson: life may well, life will indeed, bring us all to our knees. But, once it does, once it has, there will still be opportunities to exhibit grace. To comfort and brighten children. To be beheld in one’s former glory. By the unlikeliest of eyes. And, for such visitations, no foreign language at all shall be necessary. 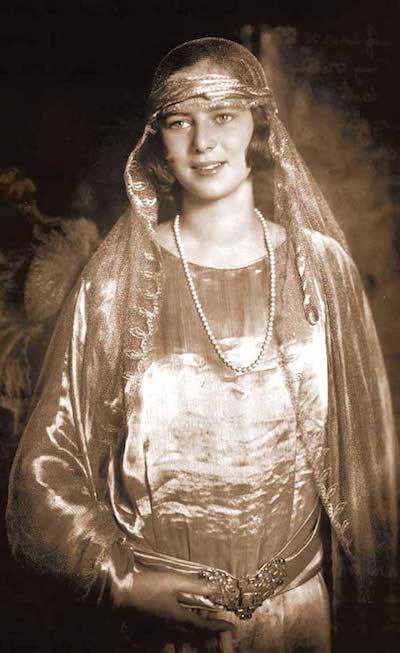