“We also marvel that Greeks, who have known so many hardships during wars, civil war, dictatorships, and the like, have not cleared the shelves of toilet paper, pasta, beans, flour, or other staples we read are missing from supermarkets in Anglo-Saxon countries.”—Diana Farr Louis 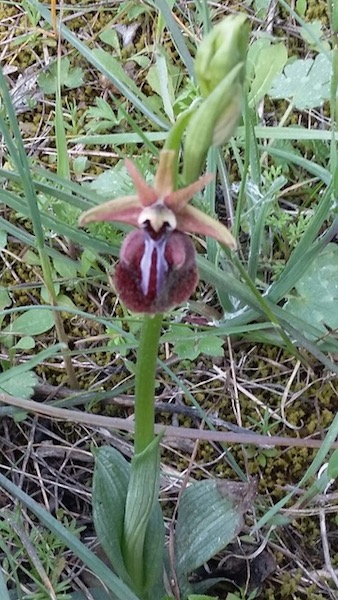 Bee orchid, just one of the four or five different species thriving in the fields here in March.

Please forgive me for not writing sooner. These past few weeks have been so strange. Theoretically, I have more time than ever before—no work, no appointments, no outings—and yet I don’t manage to get anything done. My to do list is endless but it mostly consists of making (or receiving) lengthy phone calls or answering emails, and they get checked off a few at a time, while others are added, so it never gets any shorter. I haven’t started a new project, have read maybe three-four books, and I can’t even pretend that I’ve been spending all this time cleaning the house or sorting out the storeroom in the basement. I haven’t even ventured down there except to bring up the bottles of wine cached from a visit to our favorite winery in Nemea just before the lockdown.

I’m not anxious, stressed, or paranoid, unlike a neighbor who has not left his flat since the weekend of March 21st, when the lockdown went into effect. I get plenty of exercise, four mornings joining friends in our regular yoga for oldies class via Zoom, and splendid walks in the afternoon in search of wild flowers like tiny orchids and anemones in a huge field conveniently close to our now closed, very popular Syngrou Forest. Since the field’s beginning to dry up, I’ve taken to wandering the streets of my green suburb where yellow Banksia roses ascend the tallest cypress trees, violet wisteria drip from balconies, Judas trees shed pink confetti on the sidewalks, fire-engine-red poppies push merrily out of a wall, and carpets of chamomile turn the most desolate gravel patches a fragrant yellow.

I’ve become so blasé I don’t even bother to listen to Dr. Sotiris Tsiodras give the daily report at 6 p.m., relying on my husband to tell me anything important. He is the Fauci of Greece, and a similarly unpretentious, calm, empathetic, and reassuring voice of science and reason. He was born in Australia but returned to Greece with his parents and went to medical school here before training in Philadelphia and Boston, where he received his MA from Harvard in 2001. Sotiris means “savior” in English; he is aptly named.

I feel so grateful to be in The Big Olive rather than the Big Apple these days. Our Prime Minister, Kyriakos Mitsotakis, another Harvard man, took Tsiodras’ advice and shut down the country as soon as Italy’s problem looked likely to be contagious. How refreshing it is to see articles in the international press acclaiming Greece’s handling of the virus rather than defaming us as lazy, irresponsible, and disorganized.

And the measures have worked so far, with 144 deaths (in a population of about 10 million) as of May 3rd, and people by and large obeying the rules. Heavy fines were handed to those who dared venture to their country homes for Easter, but we haven’t driven outside our suburb these past six weeks and no one ever asked to see our dutifully filled in “passports” to go out: to the supermarket, pharmacy, doctor, walk the dog, or get some “personal exercise.” As for the supermarket, we only went once, just before the lockdown. Receiving a number, 43, we entered the fairly spacious shop, noticed no empty shelves, but resolved never to go again after waiting 43 minutes in an interminable socially-distanced line to pay for our groceries. Happily, everything we need can be found in small shops on our street and, like many other friends, we’re realizing we can do without supermarkets.

We also marvel that Greeks, who have known so many hardships during wars, civil war, dictatorships, and the like, have not cleared the shelves of toilet paper, pasta, beans, flour, or other staples we read are missing from supermarkets in Anglo-Saxon countries. There has been no hoarding, unlike in April 1941, when my mother-in-law rushed to stock up on essentials when she heard the Nazis were poised to invade Athens: several demijohns of ouzo and what she hoped was a sufficiency of cigarettes.

Roses, roses, everywhere by the beginning of May.

My hair—which has grown longer than it’s been in decades—does stand on end, though, when I get emails from a friend in Jackson Heights, Queens. She’s all too close to the ill-fated Elmhurst Hospital, the worst stricken in New York, and describes the incessant wail of the ambulances, the terror of living in a large apartment building, assiduously wiping all surfaces with disinfectant (not drinking or injecting it!), wondering whether your winter coat is carrying germs on its fur collar . . . .  She sends me links to stories about Americans emptying gun shops, dying after confusing fish tank cleaner with Agent Orange’s recommendations for a cure, and videos of Cuomo acting presidential.

I know the source of my lack of creativity, productivity, punctuality: I am simply too distracted by the stories coming from my birthplace to focus on anything else while indoors. You know what I mean. Everyone does.

A friend visiting here from the East Coast finally managed to get an appointment at the Department of Records. She needs to clarify a legal detail about her parents’ divorce, although that occurred back in 1978 and both are deceased. The department director (female) kept her waiting (in an empty office) for half an hour before laying down the law like a hostile sergeant major. “That’s what it is, like it or not; it has to pass through the Greek courts and will take six to twelve months and cost you 1,000 euros.” When my friend was finally allowed to speak and explained that she’d like to finish with the case since she has to return to America soon, the woman changed her tone completely: “You can’t go back to America. It’s a crazy country. You’d better stay here!” 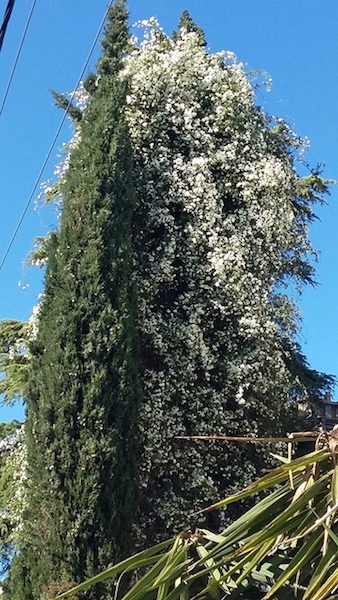 Banksia roses, white or yellow, climb up many of Kifissia’s trees.

Another source of distraction, though, has been the kitchen. This time of year, Greek vegetables are unsurpassed: asparagus, artichokes, the freshest of peas and beans, garlic, zukes with bright yellow flowers are all on sale at the Wednesday farmers’ market around the corner, which has half the number of vendors it used to, decently spaced. I buy too much and then riffle through cookbooks and webpages to find new ways of preparing them.

Every night, I give thanks for these treasures, for having someone to hug and cook for, for having my son close (but not too close), for modern technology that keeps us connected, for having so much natural beauty on my doorstep. And I utter a prayer, a plea, that we as a species can grow up a bit, take better care of each other and of the dear planet that has been entrusted to us, find a more equitable way of sharing and allocating resources and income, and realize that united we stand, divided we fail. 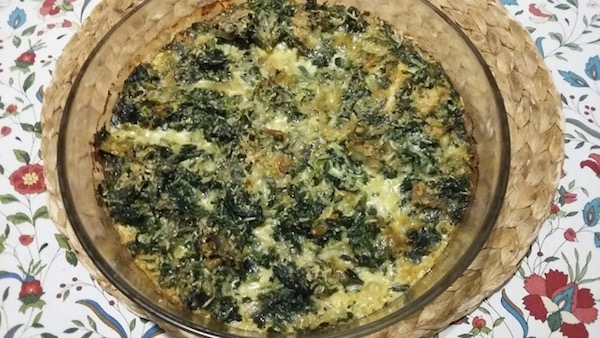 Facebook has been another distraction and, one day, I was surprised and pleased to see that a friend had been using her lockdown time to go through her cookbooks and that one of them was my Prospero’s Kitchen. She’d discovered a recipe I hadn’t tried since June Marinos and I first tested it for the book way back in 1994. She’d posted the cover and the page, so naturally I was grateful but also curious. As my friend said, she was attracted by the tempting description, “lazy cook’s souffle.” It’s easy and it’s very comforting.

Saute the onion and chopped spinach in olive oil until well wilted. Off the heat, stir in the beaten eggs, cheese, rice, and milk. Mix well and pour into a greased Pyrex or baking pan, top with some more grated cheese, and bake in a moderate oven (375ºF/190ººC) for about 40 minutes. Serves 3-4.

This also works well with grated zucchini, without the rice, with some garlic sauteed with the onion, chopped parsley and a crust of breadcrumbs mixed with grated cheese.

Much easier than spinach pie!

7 Responses to Letter From Athens, Greece