“Our university town, Gainesville, is a mirror of the polarization sweeping the nation. The intellectuals look down on the rednecks (until their cars break down) and the rednecks want nothing to do with the intellectuals (until they need a lawyer). Those of us in between do the best we can, stumbling toward answers.”—Burt Kempner 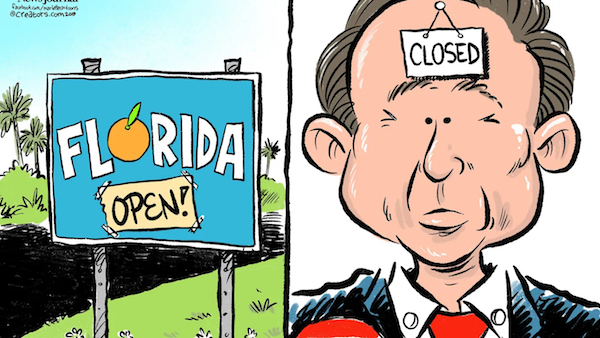 OK, it’s time to take the Flori-DUH and Florida Man memes off the shelf again (they don’t stay up there long enough to get dusty, do they?). But this time the humor is running heavily on the gallows side. I sent you a photo a couple of months ago of our hapless governor, Ron DeSantis, holding a press conference wearing only one glove and scratching his nose with the ungloved hand. Last week, he demonstrated that after all this time he still doesn’t know how to put on a mask. At a time when we need an FDR, we get Benny Hill instead.

I’ve lived among all sorts of people here for almost 35 years now, sat with them, talked with them and drunk with them. So many of them are decent and so many of them are afraid. Look, with congestive heart failure and severe anemia, I’m pretty much situated at the top of the vulnerable heap, and while I take sensible precautions, I can’t allow myself to live in abject fear. My patience runs out, however, with self-proclaimed American freedom fighters who profoundly misunderstand both freedom and America. I realize that a lot of these men and women are desperate to become wage-earners again but their right to protest ends at the tip of my lungs.

I was awakened from a sound sleep last night by the mother of all thunderstorms, just one mammoth gust or two away from being a tornado. The rain was coming in sideways and the whole house was shaking. My dog Dolce is afraid of most things in life but thunderstorms above all. I gathered him in my arms as I thought about what the past six weeks have taught us (OK, I’ll just speak for myself here, Steve), and what’s coming next. My dog trembled fiercely against me until with the pale promise of dawn, we both found rest.

Be well and stay above the snake line, my brother.