Living with Urgency on a Dying Planet

“Closer to home, Homo sapiens mammals cannot evolve fast enough to escape the current extinction crisis. Humans are vertebrate mammals. To believe that our species can avoid extinction, even as non-human vertebrates and non-human mammals disappear, is classic human hubris wrapped in a warm blanket of myth-based human supremacy.”—Guy McPherson 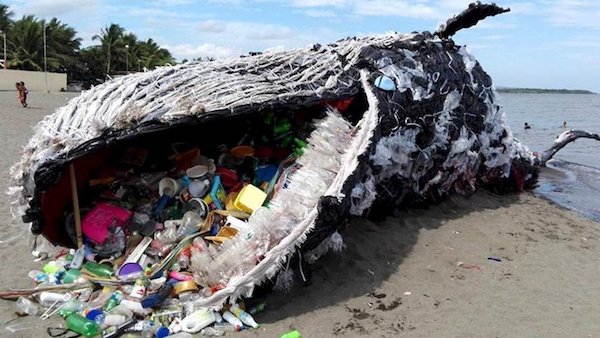 Whale installation made from trash found in the ocean. (Image: Greenpeace Media.

WESTCHESTER COUNTY New York—(Weekly Hubris)—March 2019—American professor of evolutionary biology George C. Williams died in September 2010 at the age of 83. I doubt he knew we were facing our own imminent extinction when he said, “Most evolving lineages, human or otherwise, when threatened with extinction, don’t do anything special to avoid it.”

By the time Williams died, I’d been sounding the alarm for three years. I was hardly alone. The warnings I’ll mention in this essay were hardly the first ones about climate catastrophe likely to result from burning fossil fuels. A little time with your favorite online search engine will take you to George Perkins Marsh sounding the alarm in 1847, Svente Arrhenius’s relevant journal article in April of 1896, and young versions of Al Gore, Carl Sagan, and James Hansen testifying before the United States Congress in the 1980s. There is more, of course, all ignored for a few dollars in a few pockets.

The projected rate of climate change based on IPCC-style gradualism outstrips the adaptive response of vertebrates by a factor of 10,000 times. Closer to home, Homo sapiens mammals cannot evolve fast enough to escape the current extinction crisis. Humans are vertebrate mammals. To believe that our species can avoid extinction, even as non-human vertebrates and non-human mammals disappear, is classic human hubris wrapped in a warm blanket of myth-based human supremacy. The evidence indicates humans will join the annihilation of “all life on earth,” as reported in the journal literature on 13 November 2018. After all, humans are alive (some more than others).

The response to these warnings, throughout history? Shift the baseline. Ignore the abundant science. Throw caution to the wind.

The corporate media, governments, and most climate scientists continue to adhere to the 2C target proposed by economist William Nordhaus in 1977: “If there were global temperatures more than 2C or 3C above the current average temperature, this would take the climate outside of the range of observations which have been made over the last several hundred thousand years.”

We know quite a bit more about climate science than we did in 1977. And real scientists knew, even way back then, that economists were not to be treated as scientists. It’s small wonder Nordhaus shared the politically motivated Nobel Prize in Economics last year. I wouldn’t have been surprised had he been given the Nobel Peace Prize, thus joining fellow partners-in-specialists-in-genocide Henry Kissinger and Barack Obama.

How Hot is Earth?

Earth is currently 1.73C above the 1750 baseline marking the beginning of the Industrial Revolution. This global-average temperature is the highest ever with Homo sapiens present, according to a 2017 paper in Earth System Dynamics by James Hansen and colleagues. In other words, our species has never experienced a hotter Earth than the one currently driving the ongoing refugee crisis as habitat for humans disappears. And we’re not quite at the 2C limit (sic) established by Nordhaus.

In response to the ever-accelerating crisis known as abrupt climate change, the conventional approach is to shift the baseline. Instead of admitting the planet is nearly 2C above the 1750 baseline, governments and many scientists have determined the baseline is actually 1981-2010, or later. Adherence to the Precautionary Principle is clearly unfashionable.

We’ve known for decades that the 2C number set in stone by Nordhaus is dangerous. We were “running out of time” to deal with greenhouse gases in 1965, according to the chief of the American Petroleum Institute. Fourteen years later, it was Edward Teller informing Big Oil they needed to change. Al Gore and Carl Sagan testified to Congress in 1985 that we must act now on climate change. In late June 1989, Noel Brown, the director of the New York office of the United Nations Environment Program indicated we had only until 2000 to avoid catastrophic climate change. About 16 months after Brown’s warning, the United Nations Advisory Group on Greenhouse Gases set 1C as the absolute upper limit in October 1990. Climate speaker and writer David Spratt said 0.5C was the upper limit in October 2014.

It was probably too late to reverse abrupt, irreversible climate change in 1977 when Nordhaus shared his genocidal opinion. It certainly was too late to change course in 1989. And comforting words aside, we haven’t done anything to prevent our own extinction in the wake of warnings distant or near.

It gets worse, of course: United Nations Secretary-General António Guterres says we have until 2020 to turn this ship around. The only known means by which humans can change the global-average temperature in any direction between now and 2020 is the reduction of industrial activity, which will alleviate the aerosol masking effect and therefore drive the global-average much higher very quickly (the impact of the aerosol masking effect has been greatly underestimated, as pointed out in a 17 January 2019 article in Science). And that’s not the direction we want the temperature to change if we’re interested in maintaining habitat for vertebrates and mammals on Earth. Loss of the aerosol masking effect means loss of habitat for human animals, with human extinction to follow.

It gets unimaginably worse by the day, of course. The latest information from the refereed journal literature finally caught up to me in concluding the Sixth Mass Extinction could annihilate all life on Earth. A paper in Science Reports draws this conclusion based upon the rate of environmental change, consistent with my own conclusions. Five-and-a-half years after I described the horrors of interacting factors, a paper in the 21 December 2018 issue of Science concludes such interactions are tremendously important. Following up on 10 January 2019, a paper in the same publication points to ocean temperatures increasing much faster than expected, thereby ensuring 2018 as the year with the warmest oceans ever recorded on Earth. As one result, Antarctica is losing ice mass at six times the rate of 40 years ago, according to a paper in the 14 January 2019 issue of Proceedings of the National Academy of Sciences.

As one who loves life, my gratification from these most conservative of sources is overwhelmed by my sadness at the loss.

The Oceans are Dying

Turning to the ever-warming planetary oceans takes us to a review paper in Science, a premiere refereed journal. The journal article was widely reported by the corporate press (for example, the New York Times), probably because it adheres to the 2100 meme. It’s the standard, halfway-there approach. Color me shocked.

Shifting the baseline is a common trick used by governments, media, and paid climate scientists, as I have explained repeatedly. We were on the brink in 1965, we had 10 years in 1989, and now we have until 2030 or 2020. Shifting the baseline continues, even in the journal literature, which claims we are striving to achieve a target we passed long ago: 1.5C above the pre-industrial baseline.

In the current case, shifting the baseline is hardly the only problem with the recent review paper in Science. Indeed, the article refers to ocean deoxygenation (also known as hypoxia) as if this phenomenon could never occur in the near future, much less today. The study adds to information published in a March 2017 edition of Proceedings of the National Academy of Sciences pointing to deoxygenation of the oceans. Neither study draws attention to earlier research indicating deoxygenation could become a major issue by 2030. Nor do they point out obvious, ongoing harbingers. They similarly downplay the rapidity with which deoxygenation can occur, as reported in the August 2017 issue of Science Advances. The latter paper mentions, quite importantly, that dead zones in today’s oceans bear remarkable resemblance to those during the Cretaceous. As pointed out in an article in the 19 December 2018 issue of Science Advances, “ocean oxygen loss may, thus, elicit major changes to midwater ecosystem structure and function.” As expected, plankton productivity is plunging as the base of the marine food web is destroyed by rapid changes in the world’s oceans.

Even US Senator Bernie Sanders is willing to describe ocean deoxygenation as a contemporary issue, as illustrated in the short video embedded below.

The oceans are running out of oxygen, and climate change is fueling the decline. via The Years Project

The 10 December 2018 online issue of Proceedings of the National Academy of Sciences includes a paper titled, “Pliocene and Eocene provide best analogs for near-future climates.” When does the paper propose such a profoundly rapid rise in global-average temperature? As early as 2030, from this most conservative of sources. Following up on 10 January 2019, a paper in Science points to ocean temperatures increasing much faster than expected, thereby ensuring 2018 as the year with the warmest oceans ever recorded on Earth.

It’s not only the world’s oceans currently impacted by hypoxia. Dead zones have already spread to freshwater lakes and streams.

Lacking habitat, humans will not survive Earth with a Pliocene-style climate. The same holds for Earth with an Eocene-style climate. Sadly, hothouse Earth is simply not suitable for us. We are vertebrates. We are mammals. Neither vertebrates nor mammals can “keep up” with projected gradual changes. To believe we can adapt to or mitigate for the abrupt climate currently under way is absurdly human.

Precisely zero humans will witness 2100. Indeed, there will be nary a human more than seven decades before the calendar reads 2100. As a result, no calendars will be turned to 2100. Rather, our species has a scant few years left on Earth.

To put it simply, our fate as a species is sealed. We’re headed for extinction in the very near term despite warnings dating from more than 150 years. It’s a tragic tale. And, as foretold by evolutionary biologist George C. Williams, our species hardly made a squeak as the hammer dropped.

Our extinction is imminent. As usual, I encourage readers to live accordingly.

33 Responses to Living with Urgency on a Dying Planet