“Whether there was a neuron misfiring in my brain, a synaptic scramble (which I’m willing to this day to acknowledge as a distinct possibility), or whether what occurred was an aspect of reality, which I’m equally willing to entertain; nevertheless, I encountered something beyond words, something which only fits within an ineffable dimension . . . a mystical leap.”—David Christopher Loya 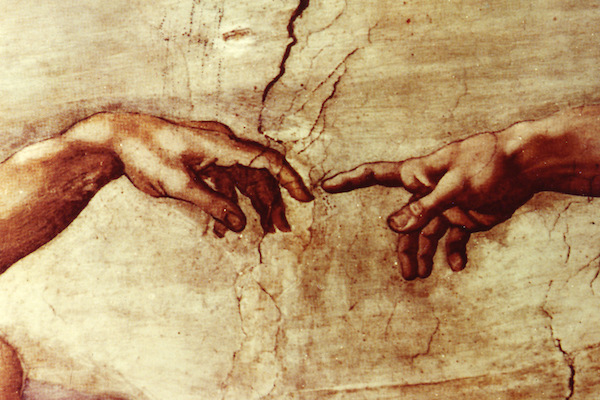 BURBANK California—(Weekly Hubris)—December 2018—It was early in my career, and I had just completed a very long shoot day. I returned home near midnight, after a 6 a.m. call time. However, upon entering my house, I wasn’t feeling exhausted but, rather, exhilarated. It was the first real film project that I was directing for my newly formed production company.

My wife was already asleep, and so was my nearly-one-year-old daughter, Sarah. I gingerly opened her bedroom door and gazed upon a tiny slumbering angel nestled against her favorite stuffed animal.

Given all the success I had been experiencing, while also being a relatively new doting father, I could feel nothing but joy, love, and gratitude at that moment. I leaned over the crib railing, kissed Sarah lightly on her cheek, and whispered softly in her ear, saying, as I have countless times since, “Daddy loves you.”

I gently closed Sarah’s door and walked the hallway to my bedroom, readying myself to sleep in anticipation of another early call time.

As I lay down next to my sleeping wife, I felt a sense of peace and self-assurance that I don’t think I’d ever experienced prior to that point. I really couldn’t sleep, so I did what I often did at that time in life. I prayed.

My theological perspectives in early adulthood comprised an artless, ignorant, even vulgar mix of evangelical Christianity, supercharged with a good dysfunctional dose of a Roman Catholic faith tradition.

Yet, I vacillated greatly between being a champion of progressive, secular causes to falling back on the addictive, comforting nature of “belonging” that a religious worship community bestows.

It’s what the initiated refer to as “fellowship.” But the dynamics are no different than those that attract young men into joining a gang. It’s also not dissimilar to members of the traditional white male patriarchy pledging allegiance to a fraternal association.

At our core, we all seek significance. And many find it via acceptance and association with those they would have as their peers; those who often become a substitute even for family.

The high price many are willing to pay (what I see as the exchange of one’s very soul) to avoid the illusion of being alone isn’t for everyone. Certainly, I came to realize it wasn’t for me.

Upon resigning his membership to the Friars Club, Groucho Marx famously remarked (or did he?): “I don’t want to belong to any club that would accept me as one of its members.” Whether Groucho said it, or not, it’s a quote I’ve taken to heart.

Self-deprecation in the service of checking one’s ego is refreshingly grounding. Most important, it’s an exercise in not taking oneself too seriously—something that every orthodox religious movement has yet to master, and perhaps therein lies the greatest danger.

As I began to pray, I prayed with the innocent, inanely sincere, fervent earnestness of one who truly didn’t know any better. Prior to the prayer, I was reflecting on the boundless love I felt for my baby daughter. It was boundless. I knew that I would walk through hell and back for her. And, in that moment, I felt I had discovered an insight into the nature of divine love.

I remember the prayer well. It went like this.

“Lord, if I love my baby daughter so much as her father then, as our ‘heavenly father,’ tell me, is this how you love us?”

There was an answer to this prayer; but understand that the very construction of my “supplication” reflected a distinctly twisted, Western, Christian, patriarchal perspective, devoid of the deeper reaching, the inner evolution, needed to fully comprehend the invalidity of a primitive 4th-Century cosmology.

And yet, still, I experienced an answer.

Whether there was a neuron misfiring in my brain, a synaptic scramble (which I’m willing to this day to acknowledge as a distinct possibility), or whether what occurred was an aspect of reality, which I’m equally willing to entertain; nevertheless, I encountered something beyond words, something which only fits within an ineffable dimension . . . a transcendent leap.

With no distance between the question in my “prayer” and the response, as though both were not at all separate and distinct occurrences but, rather, a single event, my conscious self lifted above my body.

The best description I can give is that I entered a realm, an unworldly realm, but not unworldly in an eldritch sense. It was unworldly in that I was within a truer reality than could be ascertained by using human senses.

And yet, I was still fully aware of my surroundings and even my body. But what made the difference was one word.

I found myself immersed in an electric, all-consuming, ecstatic state of love that I had never before experienced, nor have experienced since. And that wave of immersive love continued to grow: It engulfed me. If could have remained in that state forever, I would gladly have done so. (For those who are curious, I had consumed no alcohol that evening, nor was I on any prescription medication, or under the influence of any other kind of narcotic.)

If you have ever truly been in love, and recall that feeling, that state, then imagine your love being reciprocated a thousand, ten thousand, a million times over. It’s the one poor description I can give of the realm I had entered.

I had asked “divinity” if the love I felt for my child was akin to the love a mythical, divine patriarch felt for his children. And I was given an answer.

The answer implied was: “Let me show you how you actually are loved.”

And, in its most powerful form, it was the love of a lover.

And that revelation was something real, something living, mighty, and akin to an immense wave from an ocean composed of waters of love that overwhelmed me but, instead of drowning, I had never felt more alive in my entire, short earthly existence.

Quite simply put, I was in an ecstasy that exceeded any loving human experience, yet it was devoid of any eroticism, which wasn’t “needed.”

Consider that human sexuality in its most loving, existential context is connection sought via the complete sharing of our bodies. Still, like so many of Plato’s cave shadows, it too is only a projection of something far greater.

For the awakened, we do our best to reach that “something.” What I was experiencing in those timeless moments was that something, the actual source of the light that creates lovers’ shadows on Plato’s allegorical cave.

The presence of absolute love then slowly, gently lifted itself from me, even though I did not want to leave that state.

My heart was pounding faster than on any long-distance run I had since competed in. My breaths were rapid and shallow. Something significant had happened in my life.

Again, I am willing to accede to the possibility of a cerebral neural misfiring, but I have to admit, I’ve never had a repeat of the experience, beyond of what I would only call “glimpses.”

Whether a fabrication engendered by a chemical imbalance, or a true encounter with the Ineffable, my “experience” forever changed me.

Gradually, I embarked on a search for the deepest spiritual truth. For over two decades, I read and read, wanting to understand not just the nature and origin of biblical scripture, but that of other faith traditions, as well.

I delved into modern Christian theologians such as John Shelby Spong, Marcus Borg, and John Dominic Crossan. I read the works of yogis such as Paramahansa Yogananda, immersed myself in New Thought’s self-appointed prophets, and I even drank deeply from the Hindu Mahabharata and the Upanishads, by which biblical psalms pale in comparison); I explored the tenets of Buddhism and Zen, following the writings and lectures of modern philosophers such as Thich Nhat Hanh, and Alan Watts.

In an ardent quest for a divine Beloved that I had never known to exist prior to that ecstatic encounter, the more “knowledge” I absorbed, the more the mystery deepened.

But I did come to know one thing: The traditional Christian theological narrative represented a cosmology that became utterly irrelevant to me.

I realized that religion at its best is only a signpost to something deeper, something better, something that causes the necessary abandonment of childish superstition.

I only use the word “God” within contexts. My experience more accurately reflects what has been referred to in Eastern traditions as an encounter with the “Ground of All Being.” For myself, I can only speak of “Source” or “Presence.” Any attempt at anthropomorphising is the closest we get to real sacrilege.

And I even avoid the use of the words “spiritual” or “spirituality.” Those are terms which always seem to evade objective meaning. To progress beyond religion, we need an unbiased common ground.

The closest I’ve come to that place was in realizing that our most essential quest is that for who and what we really are. The greatest question we can ask is, “Who am I.” The deepest answer, based on what I’ve discovered, is one that is considered verboten—forbidden by virtually every culture immersed in an Abrahamic religious worldview. And that answer is not something I will address here.

Rather than thinking and operating in religious and spiritual contexts, I came to embrace an ontological perspective. Ontology addresses the nature of our being. It objectively places us on the path of learning who and what we really are.

My ecstatic encounter led me to the ontological path. In the end, that ongoing journey has taught me three essential truths:

You are more than you realize.

All of us, no matter our circumstance, exists within a transcendent reality that is nothing less

than an ocean of love.

And, ultimately, there is nothing to be afraid of.

David Christopher Loya is an award-winning filmmaker/director/writer who has created hundreds of productions for national cable and broadcast networks, Fortune 500 companies, public and private Ivy League universities, international NGOs, and charitable organizations. His unique "Conscious Filmmaker"® approach to production has been used successfully by educational institutions and prominent non-profits to raise over $1 billion in donated revenues. Loya's body of work has been recognized by 20 national Telly Awards as well as honors at the New York Film Festival and the Banff World Television Festival. A Los Angeles native, Loya says he grew up in poverty, in a violent and gang-infested, inner-city housing project, where his strong mother and runaway imagination protected him from damage and a hardening of the human heart. "Twelve years a slave" to the nuns, a full academic scholarship to UCLA comprised the lifeboat that transported him to secular freedom. Ironically, despite his abandonment of religious constructs, due to stubborn faith-tradition hold-overs Loya says that he views filmmaking as a vocation analogous to a priesthood-sans-celibacy. An accredited member of the Festival de Cannes, Marché du Film, Loya has traveled the world, forging alliances with filmmakers, distributors, sales agents, private equity investors, and producers, as he continues in active development with multiple feature film and television projects. (For a list of Loya's industry-recognized credits click here: http://www.imdb.com/name/nm0092526/.)
View all posts by David Christopher Loya →
This entry was posted in Uncategorized. Bookmark the permalink. Follow any comments here with the RSS feed for this post. Post a comment or leave a trackback: Trackback URL.

5 Responses to Losing My Religion