Love on East 13th Street: IV, Ever After

“I burned most of the day kicking around, eyeing my watch. I passed a few lookers on the way home who, under normal circumstances, might have earned a second or third leer, but I was too tormented to make the effort. When I finally got back, I got comfortable and trickled a dozen ounces of brandy down my throat. Brandy always induces a cool, detached sense of logic and perspective and, Brother, I needed plenty of both. I was about to step off a towering ledge, but I suspected the long glide down might just be worth the hard landing.”—Ross Konikoff 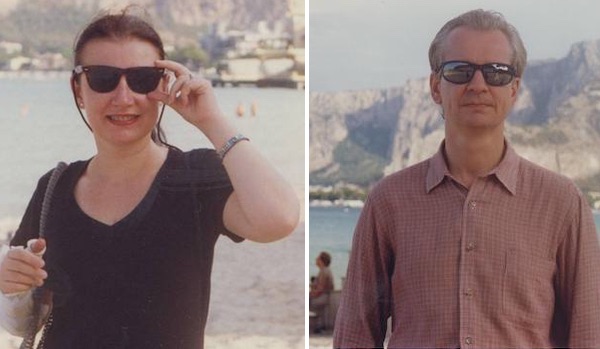 Deborah and Ross, in Monaco, before selfies.

MANHATTAN New York—(Weekly Hubris)—June 2018—I burned most of the day kicking around, eyeing my watch. I passed a few lookers on the way home who, under normal circumstances, might have earned a second or third leer, but I was too tormented to make the effort. When I finally got back, I got comfortable and trickled a dozen ounces of brandy down my throat. Brandy always induces a cool, detached sense of logic and perspective and, Brother, I needed plenty of both. I was about to step off a towering ledge, but I suspected the long glide down might just be worth the hard landing.

When it finally agreed to be 7:00, I dialed her number. She picked up on the second ring. I was getting more popular. We kept it short, making a covenant to pair up at 9:30 the following evening at a small trattoria in the east village.

I stayed inside the next day, hoping the rain would end before evening. The fewer the complications, the better. I got lucky and the rain let up, so I showed early, shuffling my feet for ten minutes before she rounded the corner, parading in on beige heels, a light blue coat, and a navy Hermes scarf. I almost heard music. She walked up and kissed me on the cheek, wearing a smile that melted everything inside me that wasn’t already molten. We locked arms and went inside. Some cute little wren nested us in a dimly lit booth in back, and we slid in next to each other.

She took a deep breath.

“Yeah, tell me . . .” she said, and then changed the conversation over to swing music. She spoke about bands from the 20s and 30s, names I’d never heard of. Then she described how sidemen used to be idolized like pro baseball players. “Have you heard? This tenor player just left this band to join that band, and that band just fired this trumpet player and hired a new hot player!” She really knew her stuff. I bluffed along the best I could, nodding and raising my eyebrows, pretending to recognize the names of drummers, sax players, and singers she loved, but I wasn’t kidding anybody. I finally had to come clean when she asked me which Benny Goodman trumpet player was my favorite. I drilled down, but came up empty.

“I never bothered listening to much of anything earlier than bebop from the late 40s. Whenever I did, it usually sounded corny and old fashioned,” I said, immediately regretting my words.

Her eyes caught fire and she seethed.

“Where in hell do you think your favorite jazz players came from? Don’t you have any interest in learning the history of what you do?” Her rage was quick, volatile, and powerful, equaling the fierce passion she’d shown me over the course of those spectacular nights we’d shared.

“I never thought about it that way,” I said, looking into her enraged eyes.

Her eyes softened and her mouth relaxed.

“It’s all in the lips,” she said. I pulled her in and gave her a kiss that she felt down to her Ferragamos. We didn’t come up for air until the waiter blundered over, clearing his throat with a roar like a freight train. We ate, drank, and laughed for a couple more hours until we noticed the joint was empty and the waiters were glaring at us, so we paid up, jumped into a cab, and got back to my place, where we barely finished another glass before tearing into each other once again.

I woke up the next morning, my mind racing. The time had come to settle all the family business. The minute her eyes fluttered open, I said, right out loud,

It wasn’t sporting of me to ambush her first thing in the morning, but it couldn’t wait.

She yawned as she mulled over the idea.

“Look, all I do anymore is wait around until the next time I see you, and that’s bad for business. I wanna buy you things, take you places, I want you in my bed every night—”

“I’m not moving in unless we’re married,” she interrupted, which was just as well since I was almost out of things I wanted.

“Would you marry me?” I asked, startled that she’d already considered the notion.

“Would I, or WILL I?” she said, demanding clarification.

Between work and making plans, we didn’t see much of each other for the next couple of days. To be espoused in New York State you had to make with the blood tests, proof of ID, $30 bucks for the license, and then wait 24 hours. After watching a shaky-handed, elderly RN repeatedly stab all around a viable vein, finally leeching out 100 cubic centimeters worth of me-juice, Xeroxing my nativity cert, and then waiting out the 24-hour “sober up and rethink your proposal” requirement, I was at peace and ready to go. The time apart did us both good, allowing for an easier transition from two neurotic singles to one neurotic couple. The next sight we had of each other was Friday at noon, when I picked her up at her apartment, following which we rode downtown together and closed the deal. A kiss for luck, and we were on our way.

Fast forward 28 years to last Sunday morning, with the two of us tangled up in the sheets, slowly regaining consciousness. She stretched her arms and legs, practically pushing me off the bed. I grabbed her and pulled her in close and held tight. Still a good fit. A few minutes later, she groaned,

I laughed, and then she laughed.

I still get a kick out of that.

9 Responses to Love on East 13th Street: IV, Ever After