“I love it, not only for its brilliant design and usefulness, but because it was a gift from my oldest brother, Shelty or, more formally, Frederick Shelton Farr. We were cooking supper in Athens the night before he flew back to Montana in October 2006. There’d been a power cut and we were whisking an omelette by candlelight. He picked through my collection of spoons, ladles, and other tools stuck into cheese baskets and wine coolers by the stove. Finally, he gave up. ‘Don’t you have a silicone spatula?’ he asked, proceeding to describe its virtues. Spatulas I had aplenty, but all frivolous, plastic things that were clearly lacking. ‘I’ll send you one when I get back,’ he said. And so he did, along with a fold-up hiking stick and a couple of books about The Wild West and Lewis and Clark, for Joy-of-the-People (my spouse).”—Diana Farr Louis

A reasonable facsimile of my beloved silicone spatula.

ANDROS Greece—(Weekly Hubris)—(First Published on September 17, 2012)—Every cook has her favorite piece of kitchen equipment. A sharp, clever knife or set of knives, a pot inherited from a grandmother, a venerable wooden spoon colored by countless stirrings . . .  might be yours. Mine is a silicone spatula. In its own way it’s beautiful, with contoured, flexible edges that scoop sauce from the rounded sides of any pan without leaving a trace and glide through a stew bubbling at 428°F without melting.

I love it, not only for its brilliant design and usefulness, but because it was a gift from my oldest brother, Shelty or, more formally, Frederick Shelton Farr. We were cooking supper in Athens the night before he flew back to Montana in October 2006. There’d been a power cut and we were whisking an omelette by candlelight. He picked through my collection of spoons, ladles, and other tools stuck into cheese baskets and wine coolers by the stove.

Finally, he gave up. “Don’t you have a silicone spatula?” he asked, proceeding to describe its virtues. Spatulas I had aplenty, but all frivolous, plastic things that were clearly lacking. “I’ll send you one when I get back,” he said. And so he did, along with a fold-up hiking stick and a couple of books about The Wild West and Lewis and Clark, for Joy-of-the-People (my spouse).

My brother Shelty, 15 years my elder, was a legend, to his family at least, before he was 20. He went off to war in 1944, a few weeks after our mother died of liver cancer, came back bearing a Nazi helmet and an SS dagger with an ivory hilt, and soon after that disappeared to Wyoming, where he studied animal husbandry (who knew what that was?) under the GI Bill at the university in Laramie instead of going to Princeton and entering his father’s firm on Wall Street. After graduation from high school, Dad had sent him to work on a friend’s ranch until he was called up, and from then on he renounced the East and all its conventions.

Dad also wanted him out of the house of gloom, where our mother lay in pain for a year, writing poetry when she couldn’t sleep. This is what she wrote in one poem:

“We have lost him to the mountains of Wyoming,
To her forests, her valleys, her vastness.
The rivers, the trails, the wildness
Have claimed him for their own.
Now he is one with the ranchers
Fast learning their time-honored ways.”

“I feel as if my right hand were severed from me.
Always, from the time he was a tiny boy
He’s been the one to understand my needs.”

Decades would pass before I would get to know him. He came East so rarely the only way we could see him was to go to Wyoming ourselves. So every August, the whole family would board the train at Grand Central Station and spend three days and two nights, with a change at Chicago, traveling to Cody or Cheyenne, and then to some ranch where he worked as a wrangler.

We’d go to round-ups and watch him lasso steer and brand them. We’d ride single file with him on threadlike cliff trails in the Rockies, watch him lift trout from pools in the Shosone River, listen to tales told in his slow drawl, already devoid of any trace of the Eastern seaboard. He would yodel for us—a mysterious, unearthly sound—and point out antelope, moose, and horned toads. 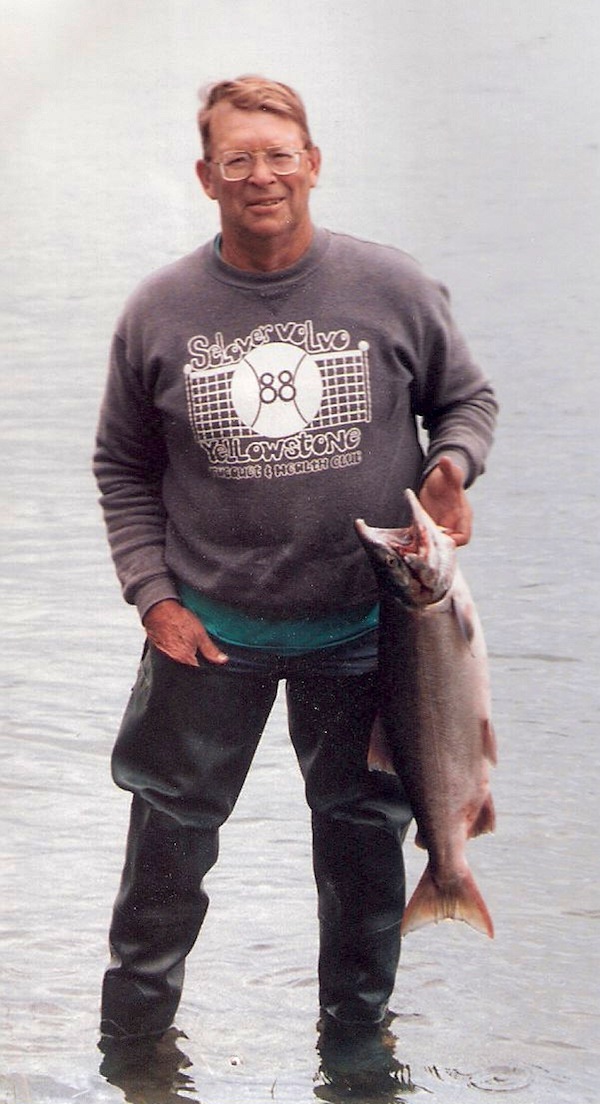 Shelty with his catch.

On his rare visits East, he always wore his cowboy boots and hat, oblivous to city slickers’ stares and whispers. (This was in the 1950s, before they became stylish.) He was tough, scorned comfort—for years his house near Cody had no indoor toilet, even after he married (a similarly hardy Irish lass) and had five children. Once, on a visit with my father when I was 14, the door locked behind me in that outhouse and I spent hours reading Sears Roebuck catalogues, the toilet paper of choice in those parts.

But that year we saw each other twice. Shelty and his new Danish wife came to Greece, and later Joy-of-the- People and I flew out West. Well before that, he’d quit farming—a 365-day-a-year job, which gave him no chance to hunt, fish, and enjoy the nature he loved—earned a teaching degree, and moved to Billings, Montana, where he taught Fifth grade till he retired.

In Greece and Montana, we discovered we had so much in common. Besides blondish hair that refused to go grey, blue eyes, and a stubborn streak, we both loved cooking (and eating), gardening, photography, travel, tennis, the great outdoors, and talking about our parents. Admiring my broad beans, which he’d never seen before, he told me about our mother, who died when I was four, and what my father was like as a young man. Astounded at his glorious potatoes—six or seven fat ones to a plant—I told him about Dad’s later years in Italy.

Though time and the family diaspora had separated us, we became very close in later life. But in many ways, he never stopped being a legend. This was a man who won regional tennis tournaments after two knee replacements—both done at the same time, something he did not recommend. They were Old Fossil tournaments, for the over-65, and he had a collection of fossils instead of silver cups on his mantel. Every other year, he volunteered for an Earth Watch project, flying out to Botswana to tag crocodiles, to Australia for something to do with koalas or kangaroos, or to the Patanal wetlands in Brazil to catalogue parrots.

At a family reunion in 2005 in Beaufort, South Carolina, he arrived with one bag bulging with food: a rolled roast of venison from a deer he’d shot, jars of chokecherry jelly, a shoe box crammed with Toll House cookies, and more. He cooked for us—pancakes and sausages—he sang folk songs for us, he made us laugh with stories about his class at school and the pet snake he introduced, he made us cry with stories about the son lost in a motorcycle accident, and he grabbed each one of us in his tight bear hugs.

Some time the following winter, he wrote that he was searching for a new Earth Watch project. “Why don’t you find somewhere close to me for a change?” I said. And so he did. For the first time, Earth Watch was sponsoring a dolphin-counting program in the Ambracian Bay in western Greece.

He landed in Athens with some more home-cooked goodies, including a deer meat sausage and date bars, but also a pair of soft deerskin gloves just my size from the same animal. He always maintained that he treated nature and his prey with the utmost respect and tried to put it to good use.

After a couple of days, we drove him to the bus station and off he went to Vonitsa. At 81, he shared a dorm and a bathroom with six or seven young women, helped to cook and clean like one of the gang, proved invaluable help to the project manager, a Catalan, and entertained them all.

We picked him up at the end of his two to three weeks, and gave him a grand tour—shrimp feasts and bird-watching on and in the bay, visits to the stone bridge of Arta, Lefkada and Sappho’s Leap, Olympia, Delphi, and Monastiraki in Athens. Wherever we went, he was the one darting into shops and poring over souvenirs. “I have a recessive female shopping gene,” he would grin. “I can’t help myself and, besides, I have so many grandchildren and friends who expect presents.” 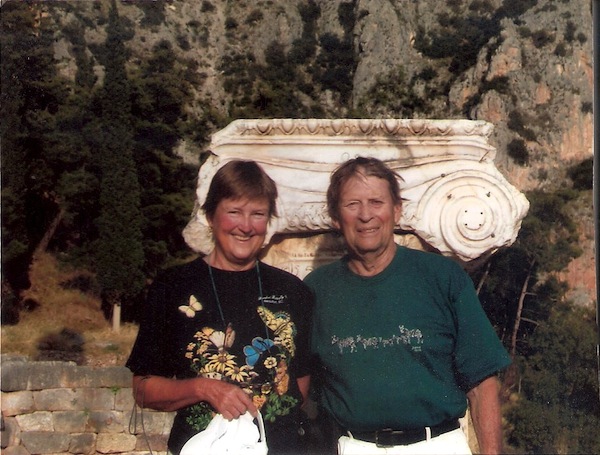 Diana and Shelty at Olympia.

That sojourn in my homeland was the greatest gift of all. During it, we became even closer, and he did confess that his PSAs were increasing and the prostate cancer he’d had twelve years before might launch another attack.

Though we talked on the phone, I would never see him again. But each time I take out my magic silicon spatula, I can feel him with me, and I remember what it was like to have a legend for a brother.

Spread half the oat mixture on the bottom of a greased 9 X 12-inch pan and pat firmly. Spread the date mixture evenly on top of it. Cover with remaining oat mix and bake for 30 minutes at 350° F. When cool, cut into bars or squares and serve. Scrumptious.