“Using objets trouvés and tools from the hardware store, she started to create fabulous animals, roosters, and sea creatures, as well as portraits. Her animals are imbued with her own energy and exuberance, and many also reveal her wonderful sense of humor: a sheep bell represents a bull’s testicles; lengths of chain a goat’s shaggy coat.”—Diana Farr Louis 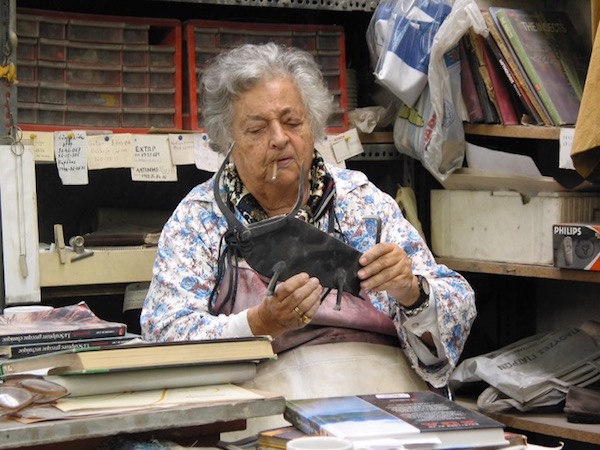 ATHENS Greece—(Weekly Hubris)—February 2020—Last spring one of Greece’s finest artists, the legendary Natalia Mela, passed away at the age of 96. In addition to two children and two or three grandchildren, she left behind a host of vibrant sculptures. Some are statues of famous people, like her grandfather, Pavlos Melas, who died in Macedonia in 1904 for the cause of the region’s freedom from the Ottomans, or the Spetses admiral Laskarina Bouboulina, who led her own ship and seven others against them in the Revolution of 1821.

But besides heroes and heroines, real or mythical, she drew most of her inspiration from nature.

A revolutionary herself, she applied to the Athens School of Fine Arts and took the entrance exam in secret, knowing that her father would object. With her maternal grandfather a co-founder of the Bank of Greece and with a lineage as close to aristocracy as Greece possesses, she would have been expected to conform. But that was never her way, and when she was accepted, her father reluctantly acquiesced. “He was mostly upset by the presence of nude models,” Nata told me when we met in her studio in the Noughties.

In the early years, she worked mostly in clay and marble and when, in 1951, she married Aris Konstantinidis, a leading Greek architect, she gave up her career for ten years to raise their two children. “But I couldn’t wait to get back to work. And I wanted to change direction and work with metal, a new trend in Paris. So, when Dimitris and Alexandra were old enough, I went to welders’ school. I was the only woman and I got my diploma in three months instead of a year.”

When Nata switched to metal, she came into her own. Her imagination woke up, she was constantly combining, inventing. Using objets trouvés and tools from the hardware store, she started to create fabulous animals, roosters, and sea creatures, as well as portraits. Her animals are imbued with her own energy and exuberance, and many also reveal her wonderful sense of humor: a sheep bell represents a bull’s testicles; lengths of chain a goat’s shaggy coat.

In the 1980s, Annette Schlumberger, the French heiress, began to collect Nata’s menagerie, many of which were made at her studio/home on Spetses. But when Schlumberger offered the island a museum to house the statues, Nata resisted. “My animals are not museum creatures. Locking them inside would be a death sentence.”

Instead, the mayor gave permission for the promontory leading to the Spetses lighthouse to be landscaped and turned into an open-air sculpture park, where Nata’s goats nibble the leaves of real olive trees, her bulls are about to charge the sea, and her mermaid is just emerging from it.

At play in “Nata’s zoo” on Spetses.

When I met Nata for the interview in 2004, we’d already been friends for decades, since my early days on Spetses, her second home, and she’d become my son’s godmother at the last minute when the person we had in mind revealed she was Anglican not Orthodox, and therefore unacceptable.

Nata had been working in her studio, formerly a stable, then garage, around the corner from the Presidential Palace and the stomping clogs of the Evzone guards since the early 1940s, when she was an art student. The accumulated paraphernalia of her trade filled every corner and shelf. Portrait heads peered from behind dusty paint cans, a full-scale Prometheus burst from a marble cave wedged between oxygen canisters. One of Nata’s signature bronze roosters, spear-like feathers spread, was about to fly off to New York. Statues crowded the courtyard, too: a stylized goat, to which a bicycle was chained; a cocky Hermes absconding with Apollo’s ram; a jumble of gods and heroes. But these were just a backdrop to Nata’s most recent masterpiece—a leopard poised to attack, golden teeth bared, claws clenched around balled paws. 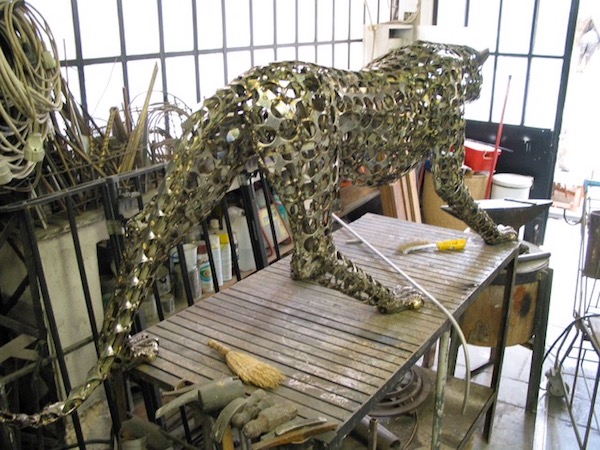 The leopard, still in the studio, poised to attack.

This glorious creature, inspired by a photo in an old Time-Life book on Africa Nata once gave to a grandchild, is the essence of savage elegance. Its galvanized metal coat, perforated into dozens of circles, was left over after Nata had punched out the scales for the reptilian tail of a Kekrops, the first king of Attica. 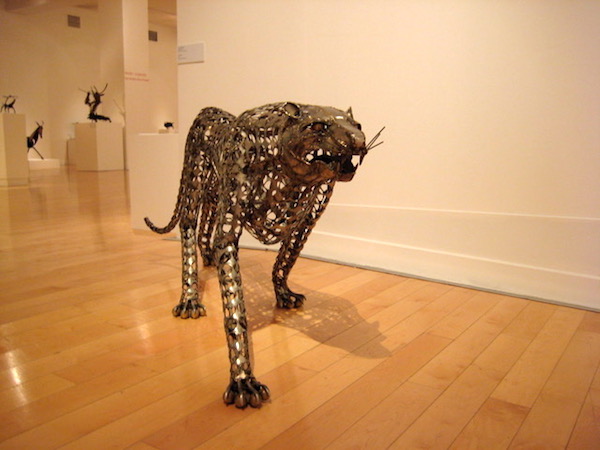 Another view of the leopard at the Benaki Museum.

Back then, at 81, she was working on another scene from nature, one much used from early antiquity on—the survival of the fittest—a panther about to devour a gazelle. Both animals had skeletons of metal strips and rods. “I’m making wild animals at the moment,” Nata said, characteristically puffing on a cigarillo, “because I’m angry at everyone; politicians, in particular. But my work contains no hidden messages. If someone wants to read something into it, so be it. As for me, I’m on the side of the panther.”

In 2008 the Benaki Museum on Pireos Street honored Nata with a retrospective, gathering together scores of works from private collections that showed the range of her imagination and expertise. Some were marble but most of them were metal.

Roosters and goats were among her favorite subjects.

By 2012, aged 89, and no longer able to use the welder’s torch even with an assistant, Nata presided over another exhibition of her creatures at an Athens gallery. This time, they were equally brilliant masterworks made of thick colored paper, her only tools scissors and glue, and sometimes paint to give the paper a hue that could not be bought. They are resplendent, cocky, witty, simply gorgeous. Sometimes, I think they are even more stunning than her earlier works.

That fall, when I saw her, sitting in the window of the gallery, puffing that omnipresent cigarillo, she showed no signs of ever stopping. The urge to create remained irrepressible. And I was reminded of what she’d once told me: “What else would I do? I’d be bored with myself if I didn’t.”

Working with paper enabled her creatures to become even more colorful and elaborate.

Unfortunately, I can’t remember a single dish Nata cooked, apart from the simplest of mezedes to accompany ouzo at her many parties on Spetses. So, this recipe for baby goat will have to do, in remembrance of all the goats, big and small, that came out of her studio.

Kid with Artichokes in Egg-lemon Sauce

6 artichokes, cleaned (and halved or quartered, depending on size and left to soak in acidulated water)

For the egg-lemon sauce

Heat the oil in a large stewpot and brown the meat on all sides, a few pieces at a time. Remove it to a platter, lower the heat and saute the onion gently until very soft, stirring from time to time with a wooden spoon so it doesn’t burn. Add 240 ml (1 cup) water and the lemon juice, scraping up any bits stuck on the bottom, and return the meat to the pot. Bring to the boil and simmer, covered, until the meat is half cooked, about 30 minutes. Add the artichokes, dill, spring onions and seasonings, and simmer till tender. Pour in a little more water if necessary.

Make the egg-lemon sauce at the last minute. Beat the eggs and lemon together until frothy. Slowly add several tablespoonfuls of broth from the stew to the mixture, whisking while you pour to prevent the eggs from curdling. Stir the contents back into the stew pot, off the heat. Mix thoroughly, reheat very gently to avoid scrambling, and serve at once. Serves 4-6.

In this dish, 1 kg (2 lbs) of wild greens, shredded romaine lettuce, curly endive or spinach can be substituted for the artichokes. If you like bitter greens, try any of the chicory family. But when using greens, parboil them first in lots of boiling water for about 10 minutes, drain and then add to the lamb.

Reprinted from my book, Feasting and Fasting in Crete (Kedros, Athens, 2001).

Note: For more about Natalia Mela as an extraordinary woman and a friend, don’t miss my column in the March edition of Weekly Hubris.

One Response to Natalia Mela’s Menagerie