“As I have been reporting for a few years in this space, anthropogenic emissions of greenhouse gases have led to abrupt, irreversible climate change. We’ve been warned about this outcome for decades. As ancient Chinese Philosopher Lao Tzu reportedly said, ‘If you do not change direction, you may end up where you are heading.’ We did not change our collective direction, despite many warnings. It seems we are nearing the end of the road for our species.”—Dr. Guy McPherson 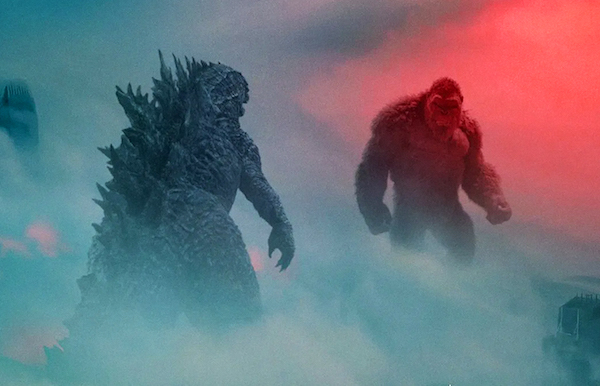 These guys are not our enemies. (Image via GhoulishMedia.)

POULTNEY Vermont—(Weekly Hubris)—1 August 2021—I recently watched the 2021 film, Godzilla vs. Kong. Godzilla has been the peoples’ protector for centuries. He turns against the people after they create a mechanized Godzilla (and, also, when they begin to meddle with nature).

Kong is the last of his kind and is the traditional enemy of Godzilla. He is the protector of the natural world and its wild places, and also of individuals that he cares about. Kong faces off against Godzilla when it looks as though Godzilla has lost his mind. But, in the end, Godzilla and Kong realize they are fighting the same enemy: technology! Only together will they be able to beat the real monster: technology gone bad.

With respect to climate change, we have triggered dozens of self-reinforcing feedback loops. These are the “bad guys” in the reality show currently playing out on Earth. As I have pointed out several times, any one of those “positive feedbacks” indicates that climate change is irreversible. And, as I have also pointed out on several occasions, these self-reinforcing feedback loops keep getting reported in the peer-reviewed literature and the corporate media as if they lie in the future, rather than already having been triggered.This short essay provides two examples, from among many.

First up: The headline at phys.org on 30 April 2021 reports, “Amazon may be turning from friend to foe.” The caption for the photograph atop the page tells the story in a few words: “The Brazilian Amazon released nearly 20 percent more carbon dioxide into the atmosphere over the last decade than it absorbed, according to a stunning report that shows humanity can no longer depend on the world’s largest tropical forest to help absorb manmade carbon pollution.” The first line of the paper further illustrates the damage done: “From 2010 through 2019, Brazil’s Amazon basin gave off 16.6 billion tonnes of CO2, while drawing down only 13.9 billion tonnes.” If this description makes it seem as though the Amazon has become a source of atmospheric carbon dioxide during this last decade, then your understanding is the same as mine.

The phys.org paper refers to a paper in the peer-reviewed literature, as usual. Specifically, according to the title of a paper published last 29 April 2021 in Nature Climate Change, “Carbon loss from forest degradation exceeds that from deforestation in the Brazilian Amazon.” As reported in the abstract of this peer-reviewed paper, “During 2010–2019, the Brazilian Amazon had a cumulative gross loss of 4.45 Pg C against a gross gain of 3.78 Pg C, resulting in a net aboveground biomass loss of 0.67 Pg C.” Bear in mind that a petagram is one quadrillion grams, or a trillion kilograms. That’s a lot.

I have reported on the Amazon basin as a carbon source, rather than a carbon sink, at least four times at Nature Bats Last. I mentioned it within my Climate-Change Summary in self-reinforcing feedback loop number 22 based on peer-reviewed papers dating back more than a decade ago. As my friend Glen Osbourne recently pointed out to me, “Amazon grows, while the Amazon burns.” Yet the headline of the phys.org paper claims, “Amazon may be turning from friend to foe.”

Example No. 2 of self-reinforcing feedback loops being reported in the peer-reviewed literature and the corporate media as if they lie in the future, rather being triggered already comes again from phys.org via headline on 30 April 2021: “Methane release rapidly increases in the wake of melting ice sheets.”

From the first paragraph comes this nugget: “Melting of the Arctic ice sheets drives the release of the potent greenhouse gas methane from the ocean floor.” According to the peer-reviewed paper’s lead author, “as the ice sheet melted and pressure on the seafloor lessened during the Eemian, methane was released in violent spurts, slow seeps, or a combination of both. By the time the ice disappeared completely, some thousands of years later, methane emissions had stabilized.”

A quote later in the article tells us, “[T]he present-day acceleration of Greenlands (sic) ice melt is an analogue to our model. We believe that the future release of methane from below and nearby these ice sheets is likely.”

The lead author’s bottom line is telling: “The projections of future climate change should definitely include the release of methane following in the wake of diminishing ice sheets. Past can be used to better inform the future.”

The peer-reviewed article is titled, “Ice-sheet melt drove methane emissions in the Arctic during the last two interglacials.” Published in the journal Geology on 22 March 2021, it makes a solid case for methane as 1) a powerful greenhouse gas that 2) forms a self-reinforcing feedback loop as the ice melts.

It happened in the past. It is happening even more rapidly today.

The abstract of the peer-reviewed paper begins, “Circum-Arctic glacial ice is melting in an unprecedented mode, and release of currently trapped geological methane may act as a positive feedback on ice-sheet retreat during global warming.”

May act as a positive feedback? It’s already happening. Just as the Amazon Basin has already become a carbon source, so, too, has atmospheric methane already become a self-reinforcing feedback loop. I have reported on this topic at least a dozen times at Nature Bats Last, and methane plays a role in 14 different irreversible, self-reinforcing feedback loops.

As I have been reporting for a few years in this space, anthropogenic emissions of greenhouse gases have led to abrupt, irreversible climate change. We’ve been warned about this outcome for decades. As ancient Chinese Philosopher Lao Tzu reportedly said, “If you do not change direction, you may end up where you are heading.”

We did not change our collective direction, despite many warnings. It seems we are nearing the end of the road for our species.

In light of this probable outcome, we have options. Living with urgency, integrity, and love come to mind.