“Dearest Friends and Rellies, sorry it’s been so long since you last heard from me, but since the lockdown ended on May 14, exactly a month ago as I write this, I’ve had no wish nor time to sit at the laptop composing epistles or even jotting a quickie update.”—Diana Farr Louis 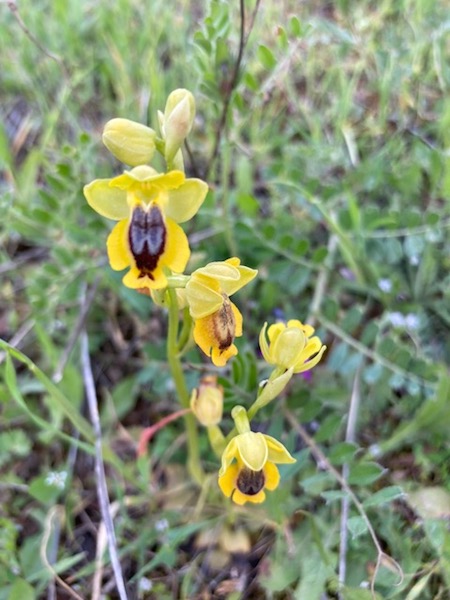 One of the many types of orchid found in our corner of Kifissia.

ANDROS Greece—(Weekly Hubris)—1 July 2021—Dearest Friends and Rellies, sorry it’s been so long since you last heard from me, but since the lockdown ended on May 14, exactly a month ago as I write this, I’ve had no wish nor time to sit at the laptop composing epistles or even jotting a quickie update. And while I’m grateful, extremely grateful, to Zoom for bringing classmates, cousins, and yoginis into my living room for company, gossip, and a modicum of exercise, it has suddenly become urgent to see friends we hadn’t seen in the flesh for a year or even two.

Admittedly, the winter was not too arduous in our bucolic corner of Kifissia, so close to woods and fields with wildflowers where it was easy to wander without a mask. We even have two farmers’ markets where I would go to meet buddies even if we didn’t need fresh fruit and veg. One friend from the other side of our suburb used to go “just to see a bit of life.” For me, the market became like the neighborhood pub: I always knew I’d see a familiar face and sometimes three or four.

But chatting in front of a mound of artichokes or pomegranates is not the same as sitting in someone’s home or around a taverna table. Between Christmas and Easter—late this year on May 2nd—we “broke bread” with my son only, and that maybe twice a month. We were well fed (not too many Covid kilos, though certainly a few) but starving for conversation and someone else’s ideas and jokes.

So, as restrictions gradually eased after Easter, we went to our first taverna with dear old friends visiting from Kythera and gobbled things I don’t cook like fried red mullet, French fries, and boiled greens—Greek staples. And were very amused to see two “old ladies”—maybe even older than I—tucking into an enormous platter of mixed seafood with their masks dangling under their chins, sort of like mini-bibs.

And then the rush began: to catch up with friends before we all dispersed for the summer in just two weeks, visit cherished tavernas, put away winter clothes, and tidy up unfinished business, like the tax declaration. For some reason, despite an urgent need to fill government coffers, each administration announces the new, ever more baffling rules later every year. We had to get to Andros by June 3rd since friends we’ve loved for 50 years were coming all the way from Idaho just to see us! 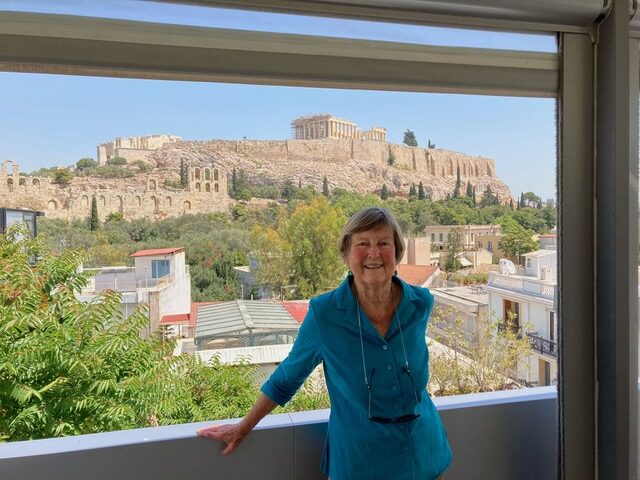 It was a cliff hanger, but the “platform” opened on May 28th and H met with the tax accountant on the 31st. In the meantime, I managed a sortie into the Big Olive, my first since Christmas 2020!

Ironically, the lure was to meet a person I’d only gotten to know on Zoom, who’d flown in from Colorado to investigate properties for a cohousing project in Greece. The traffic into town was bumper to bumper, so I made a daring decision, parked the car, and dove into the Metro. It had been so long since I’d entered public transport that, with no ticket agents in attendance, I was stymied by the vending machine. Fortunately, a handsome young man came to my rescue, showed me how to use my credit card (since I lacked the right cash), and, from then on, everything went swimmingly. The trip felt more than safe, with few passengers—I guess they were all on the road—and I arrived at my destination at the appointed time instead of an or two hour late.

My new friend’s hotel was the rather ordinary looking Acropolis View, and we went up to the roof terrace, which we had to ourselves. Somehow, we managed to talk and look at the Parthenon at the same time. I’d forgotten how magical it can be.

Then I led him down Dionysiou Areopagitou, the wide, traffic-free road below the Acropolis, where just a few tourists were strolling, into upper Plaka, and onto Mitropoleos Street, to a fun eatery opposite the Cathedral which has the improbable name of Cherchez la Femme (without a hint of La Belle France on the menu). 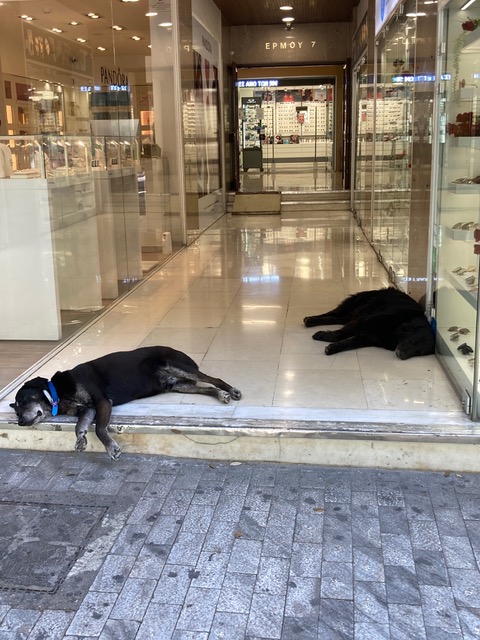 Happy pooches slumbering in an arcade on what is normally Athens’s busiest shopping street.

Even though we were drinking lemonade, I was tipsy with the excitement and novelty of being OUT, in the city, in familiar places that looked so fresh. A jacaranda tree in full indigo blossom stole the show from the stolid Cathedral; fellow customers speaking Swedish and Spanish at neighboring tables; and all except the waiters maskless. Walking up to Syntagma Square on my own after lunch, I made a mental note to come back asap and explore the new (to me at least) places that had opened up. I wanted to try every restaurant I walked by, from Indian and South American to Hawaiian sushi.

But now, after two weeks on Andros, I’m revelling in other sensations: the pleasure and surprise at walking through our front door to be greeted by no catastrophes, no damp, no mould, not even a spider; our land mostly cleared of thistles; the lemon tree thriving despite the lack of rain; rivers of pink oleanders and explosions of sun-yellow broom. The only damage was to a bedroom window where sparrows had squeezed through a diamond-shaped hole to build an extravagant nest surrounded by lots of “guano.” When I opened the window, two fledglings flew out. One left by the other window; the other remained in the living room all night and was reluctant to leave the next morning. He must have felt the big wide world a bit daunting. 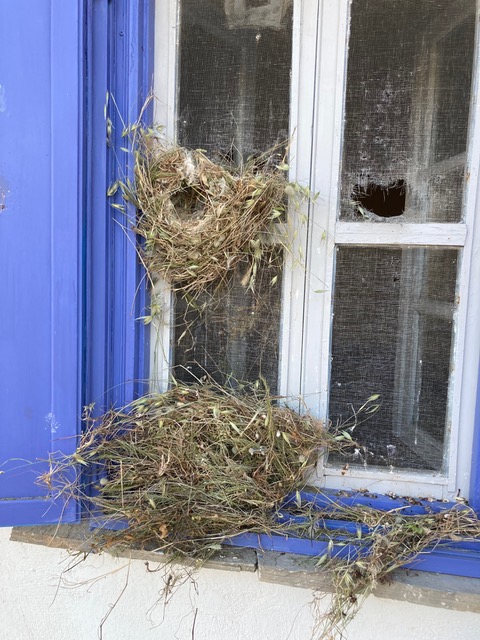 Huge nest in our bedroom window.

Since then, we haven’t stopped relishing our freedom, frolicking with our friends from Idaho, lunching with escapees from Boris’s Britain, exchanging broad smiles and warm greetings with locals who’d become friends during our six-month stay last year; discovering new treats on favorite menus; and even, after ten days, finding time to test the waters. Chilly at first but delicious once immersed. And in the evenings riveted to the TV, we watched Greek tennis stars, Maria Sakkari and Stephanos Tsitsipas, make history at Roland Garros. Two Greeks for the first time ever playing in the semi-finals, and Stephanos taking two sets from Djokovic in the finals, despite having just learned that his beloved grandmother had died.

Now the tournament is over, and we have our life back.

And the summer is just beginning, lots of friends are planning to come, and, you know what, I am going to hug them all. As tight as I can. For as long as I can.

That’s all for now. Take care and stay safe. Consider yourself hugged.

Here is an easy and exquisite feather-light dessert, which is even better with a sauce made from pureed fruit—raspberries, strawberries or sour cherries. It was served to Hillary Clinton when she came to Greece for ceremonies connected with the lighting of the Olympic Flame for the Atlanta Games in 1996. And was given to me in Rethymno, Crete, by Grecotel chef Dimitrios Staikopoulos in the course of my research for my cookbook, Feasting and Fasting in Crete.

Beat the egg yolks with the sugar in a bowl until pale and stir in the yogurt and corn flour gradually. In a separate bowl, beat the egg whites until they form stiff peaks and fold them gently into the mixture.

Preheat the oven to 180 C (350 F). Grease a souffle dish (21 cm/8 inch) with butter and dust with sugar to prevent sticking. Bake in a bain marie for about 25 minutes, until the souffle puffs right up and turns golden. Serves 6.