“I stood at the register, waving a crisp double sawbuck around like Legs Diamond, finally gaining the attention of a pretty young thing who, hypnotized by my air of self-assured panache, ran over, all smiles and said, through the thick plexi, through her thick mask, through her thick Brooklyn accent, ‘What’ll it be Mister?’ ‘I’ll have one pound of your finest, thick-sliced pastrami to take out. And not from the end.’ I admonished her. She said, ‘Yessir, that’ll be $38.50.’”—Ross Konikoff 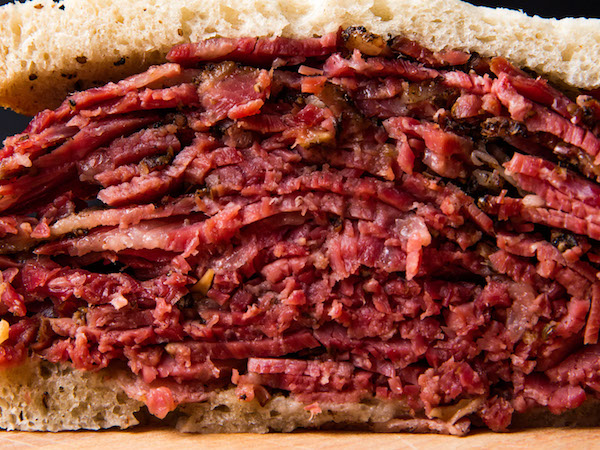 MANHATTAN New York—(Weekly Hubris)—February 2021—Yesterday while walking east on 72nd Street, between Broadway and Columbus Avenue, I passed by a deli I had recently read about, a joint called the Pastrami Queen. My tendency to easily get sentimental over practically anything these days kicked in and, as a result, one particular childhood memory flooded my senses, that of those glorious Sundays back in 1950s Buffalo when my dad would take us all to Ralph’s Kosher Restaurant for hot, juicy, fatty pastrami sandwiches on warm rye bread with sharp mustard.

Then, suddenly, it dawned on me that this might have been somebody else’s childhood memory, and somebody else’s dad, but regardless, I considered it serendipitous that I should inadvertently walk right past it, after having read such sterling reviews. I simply had no choice but to take some home and decide for myself.

I stood at the register, waving a crisp double sawbuck around like Legs Diamond, finally gaining the attention of a pretty young thing who, hypnotized by my air of self-assured panache, ran over, all smiles and said, through the thick plexi, through her thick mask, through her thick Brooklyn accent, “What’ll it be Mister?”

“I’ll have one pound of your finest, thick-sliced pastrami to take out. And not from the end.” I admonished her.

I looked at the bill I had been waving around, mumbling something about mistakenly thinking I had been holding two of them, and, feigning disregard for the astronomical price by assuming the carefree look of someone waiting for his 40-million-dollar lottery check to arrive in the mail any day now, but failing miserably at it, I said, “Better make it a half pound. I’m not so hungry anyway after last night’s feast at my Medal of Honor memorialization.”

Her smirk was worth a thousand words (each word mangled by her thick Brooklyn accent.) She rang me up, making what I considered an undue effort to belittle me, handing back my 75 cents change in the form of dimes and nickels, slowly, one by one.

I waited the two minutes as my order was severed, checking my watch every ten seconds in an effort to look late for something, until the cashier and I simultaneously noticed I wasn’t wearing one. Just then, my order was handed to me and I high-tailed it out the door.

All the way home I picked at it, stuffing pinches into my mouth like Yogi Berra in the Yankees’ dugout, jamming chaws of Skoal into his muzzle between innings. My surgical mask, having been pushed aside, was now practically dripping with grease, drawing stares of rebuke (owing to its misalignment), and scowls of disgust from others whose deeply ingrained table manners left them sputtering in disapproval.

As humiliating as all that may seem, after savoring the hot, fatty, juicy pastrami all the way back, I arrived home in a rare state of culinary rapture, ready for a nice afternoon nap.

So tell me, is that the end of a perfect day or what?”