“I, myself, doubt that many people reading these words have three years to live. Habitat for humans on Earth will disappear shortly after the Arctic ice is gone, which is likely to occur in the summer of 2019. Three decades is a pipe dream to be experienced by no humans on Earth.”—Guy McPherson 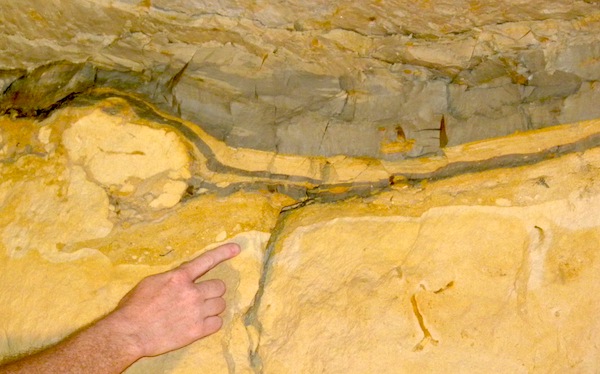 The K-Pg Boundary, all that remains of the burgeoning life on Earth prior to the Cretaceous-Paleogene Extinction Event.

WESTCHESTER COUNTY New York—(Weekly Hubris)—January 2019—Imagine you’re listening to the radio as you gaze at the horizon out your fourth-floor window. You see a mushroom cloud and immediately recognize it. You realize that the 20-foot-long I-beam spinning toward you will strike you dead in three seconds. There is no way to escape. You simply wait.

But . . . you have miscalculated the path of the I-beam. It sails clear, narrowly missing the roof above your head.

A voice on the radio announces the bomb blast will level everything in your city within three minutes. Compared to three seconds, three minutes seems like an eternity. What will you do with the time? Make a telephone call? Make peace with your god(s)?

Now, imagine a trip to a medical doctor. He matter-of-factly informs you that your condition gives you only three minutes to live. He leaves you alone with your thoughts. You ponder your life and wonder how to proceed. You think about calling somebody. Or maybe you take a few deep breaths, instead.

The doctor re-enters the examination room after two minutes and 30 seconds. He apologizes for his error and says you have about three hours to live, not three minutes. You breathe a sigh of relief. Three hours seems a long time compared to three minutes. You can make a few calls, pen a quick will, and record some thoughts for posterity.

Rinse and repeat for a diagnosis of three days versus three hours. And then, for three weeks as opposed to three days. Three weeks! It’s nearly an eternity compared to a few days.

Three years is a short-term, terminal diagnosis. Few people would be satisfied to learn they have such a short future.

I, myself, doubt that many people reading these words have three years to live.

Habitat for humans on Earth will disappear shortly after the Arctic ice is gone, which is likely to occur in the summer of 2019.

Three decades is a pipe dream to be experienced by no humans on Earth.

Although three years is a stunningly short span of time, it doesn’t seem at all short relative to three months. Ditto for the pairwise comparisons of months to weeks to days to hours to minutes to seconds. Thus, do the seven threes, from seconds to years, serve as a powerful reminder to live in the present moment.

Just as the Sixth Mass Extinction is proceeding completely unknown to most humans, the End-Permian Extinction, the worst of the six mass extinction events within the last 500 million years, occurred without warning about 252 million years ago. The current, ongoing event is proceeding at an order of magnitude faster than the version of 252 million years ago as we pump greenhouse gases into the atmosphere roughly on an order of magnitude faster than occurred then. Contemporary events match those of the deep past as marine and terrestrial species disappear over a period that is geologically instantaneous.

Because mammals depend heavily upon myriad other species for their own survival this group of organisms cannot evolve quickly enough to escape the Sixth Mass Extinction. Homo sapiens are mammals. If this sounds problematic to you, then you are paying proper attention.

Of course, the situation grows worse by the day. We are heading for a New Cretaceous Period, not for “a new normal.”

The Cretaceous Period meant hothouse Earth, the end of which was particularly suitable for the blossoming of small mammals as the dinosaurs went extinct. As the author of the linked article points out, “the only way I can possibly conceive of humans living in a New Cretaceous age is as a rump of scientists and technologists working in artificial, protected shelters.” He goes on, noting that “the Holocene was a freakish gift to humanity that we have exploited and taken for granted. We are now assisting at its funeral.”

And at ours, I would add.

Adding to the overwhelming evidence pointing to our near-term demise, comes this from the Washington Post: “Over the past quarter-century, Earth’s oceans have retained 60 percent more heat each year than scientists previously had thought.” More than 90 percent of the planet’s heat is absorbed by the oceans, where it adds to ocean acidification before it is released into the atmosphere to heat up land surfaces.

What’s the problem with ocean acidification? The seafloor is dissolving as a direct result. According to the lead author of the paper in the Proceedings of the National Academy of Sciences, “geologists in millions of years may look at the Anthropocene as a brown layer of sediments lost in the geological record.”

I cannot even imagine the level of hubris required to assume humans will survive the Sixth Mass Extinction. After all, as pointed out by Paul Watson, founder of the Sea Shepherd Conservation Society: “If the oceans die, we die. We can’t live on this planet with a dead ocean.”

None of this comes as a surprise to me, nor should it to regular readers of Weekly Hubris. After all, the atmospheric carbon dioxide level is likely the highest it’s been in 15 million years. For those of you keeping score at home, Homo sapiens have called Earth home for about 300,000 years.

We don’t have long. Pressum diem! May we find the means and the fortitude to squeeze the life out of every moment.